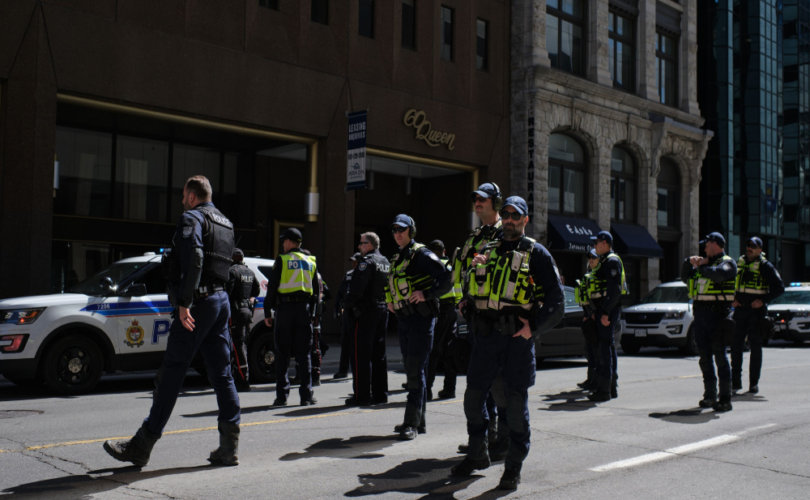 OTTAWA (LifeSiteNews) – An officer for the Ottawa Police Service (OPS) is claiming that Canada Day celebrations in the nation’s capital this year will be met with an “unprecedented and unique” law enforcement presence in anticipation of planned freedom protests.

As reported in the Canadian Press, the unnamed OPS officer said there will be a never-before-seen security presence near Canada’s parliament buildings.

In a statement on Friday, the OPS said that due to anticipated larger crowd sizes, combined with “an increased level of protests and demonstrations,” there will be “significant road closures and a major increase in police presence.”

The OPS claimed that they are working with “Canada Day organizers and our policing partners to implement a public safety plan that allows all Canadians and visitors to freely and safely enjoy the capital during this celebration.”

“The expectation is that this Canadian Heritage event will be larger than usual both in terms of crowd size and the footprint of the event,” the OPS said.

“We will be bringing multiple extra policing resources from several services,” the OPS said.

Canadian Armed Forces (CAF) veteran James Topp, who for the past few months has been marching to Ottawa to protest COVID mandates, is expected to reach Ottawa for Canada Day.

Also, journalist Andy Lee has planned to camp on Parliament Hill despite not being allowed to and has said police know about the plans.

There have also been reports of planned anti-COVID mandate protests as well as many others from multiple freedom groups.

One group called “Canada Day Convoy” says they will be in Ottawa on July 1 and that they won’t leave until Prime Minister Justin Trudeau resigns.

“1,000s of trucks are making their way back to Ottawa. They don’t plan on leaving until Justin Trudeau resigns,” the group tweeted yesterday.

The OPS said that they have “aware” of the planned freedom protests, claiming “the right to lawful and peaceful demonstrations will always be protected.”

The larger police presence is no doubt also in response to the trucker Freedom Convoy, who for three weeks in February took to the streets of downtown Ottawa demanding an end to all COVID mandates.

While starting today a COVID travel jab mandate has been lifted, as well as a mandate that federal workers be jabbed, mask mandates for travel remain, as does a two-week quarantine and testing rule for the vaccine-free returning home.

The OPS said that they will “not allow for conditions that led to the unlawful protests in February to reoccur.”

“We are applying lessons learned from the unlawful protest as well as the Rolling Thunder and associated protests to build our plan. At the City’s request, we will continue an approach that prohibits vehicle-based protests in areas in and around places of national significance,” the OPS said.

As there is an ongoing construction of Canada’s Parliament Hill, Canada Heritage has moved its main Canada Day celebrations to LeBreton Flats, which is about 1.5 kilometers away.