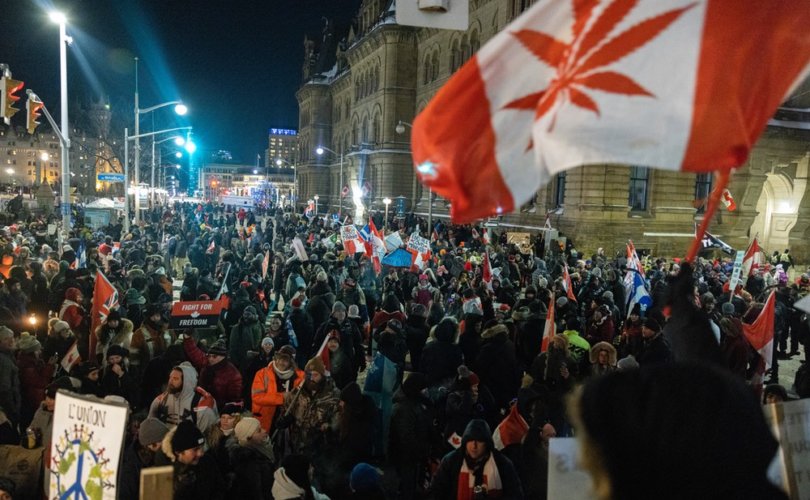 Protestors in front of Parliament Hill during a rally against COVID-19 vaccine mandates on January 29, 2022 in Ottawa, Canada. Alex Kent / Getty Images

OTTAWA, Ontario (LifeSiteNews) – Announcing a three-pronged “surge and contain” strategy, the chief of the Ottawa Police Service, Peter Sloly, outlined an impending crackdown on the Freedom Convoy protestors in the coming hours and days.

The Freedom Convoy protestors are calling for an end to all tyrannical COVID measures in the country.

“There are three parts to this new strategy,” opened Sloly at a press conference on Friday afternoon.

“Number One: We’re deploying a surge of police officers in the downtown and the immediate neighborhoods. There will be approximately 150 additional officers dedicated to only patrolling and addressing unlawful and threatening conduct in the most impacted neighborhoods,” explained the chief, saying that this “surge” will “offer a clear message to the demonstrators [that] ‘the lawlessness must end.’”

Part two, Sloly detailed, will be “a hardening of the perimeter in the demonstration ‘red zone,’ the immediate area of Wellington Street in front of the Parliament buildings,” with police being used to ensure a “further isolation and containing [of] the demonstration” through the use of “concrete barriers” and “heavy equipment barricades” to shut off access to aspects of the city.

Announcing the third part of the strategy, which Sloly called “Enhanced intelligence and investigation operations,” the chief said that by using the full force of all levels of government, the police have “increased” their “ability” to “identify and target protestors and supporters of protestors who are funding and enabling harmful and unlawful activity.”

“Every unlawful act, including traffic and insurance violations, will be fully pursued, regardless of the origin, at any time in the future,” added the chief.

Sloly continued by stating that the protesters in the “red zone” remain steadfast in their refusal to end the protest “safely,” while emphasizing that the government sees the protest as “unacceptable” while having the explicit goal of “ending the demonstration.”

“And we have learned from our experience, we have gathered new evidence, we have secured new allies, and we’re implementing new measures, to bring this demonstration to the end,” concluded the chief.

Despite the doubling down of government and media by consistently referring to the protestors as “unlawful” and “unacceptable,” the organizers and their supporters have made frequent statements advocating for the demonstrations to remain peaceful and non-violent.

Videos of Ottawa police officers have also surfaced, showing them acting cordially with demonstrators, and even admitting on video that the protestors are largely behaving legally and peacefully.

According to the organizers, the goal of the protests is to put an immediate end to all COVID restrictions. While Prime Minister Justin Trudeau and the mainstream media have consistently held that such views are relegated to a “small fringe minority” of Canadians, according to a recent poll by reputable pollster Angus Reid, a whopping 54 percent of Canadians support an end to all COVID measures, and believe risk assessment surrounding the coronavirus should be left up to the individual.

Among the “fringe” supporters is the last living architect of the Canadian Charter of Rights and Freedoms, former premier of Newfoundland Brian A. Peckford, who delivered a powerful speech at a rally last weekend voicing his support for the Freedom Convoy and outlining the various ways the government has trampled on the rights of Canadians.

“Section 2 of the Charter of Rights and Freedoms, what does it say? It says you have freedom of expression, freedom of conscience, freedom of religion… freedom of the press,” stated Peckford.