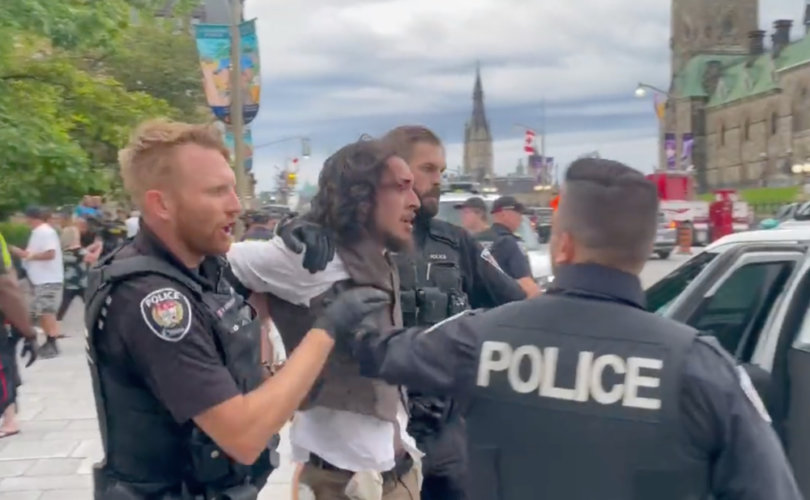 OTTAWA (LifeSiteNews) – Mere hours after freedom fighter and veteran James Topp completed his 4,000km march to Ottawa, where he was joined by hundreds of supporters in the capital, the city’s police descended on rally attendees making violent arrests.

“BREAKING: We have exclusive footage of Trudeau’s officers taking down protesters, picking them off one by one, and violently assaulting them. Trudeau is ruthless, and he is out for blood,” posted Conservative journalist and founder of The Counter Signal, Keean Bexte on social media.

BREAKING: We have exclusive footage of Trudeau’s officers taking down protesters, picking them off one by one, and violently assaulting them. Trudeau is ruthless, and he is out for blood. pic.twitter.com/ttFHkt9QcP

In the video, dozens of police officers can be seen clashing with protesters, with at least three civilians being violently pinned to the ground.

At least one officer can be seen holding a man’s face and neck to the ground as another officer punches his body. The man in the video can be seen and heard crying out in pain as at least three other officers take part in holding him down.

“What do I have to do? I want to cooperate,” says the man as the footage cuts out.

READ: The truth about why Trudeau invoked the Emergencies Act may lead to his resignation

In a separate video taken by CTV News journalist Mackenzie Gray, someone who appears to be the same man can be seen being led into a police car by a collection of officers, while another man is carried completely horizontally by another group of police.

Three people were arrested and just taken away from the War Memorial by police. I couldn’t see what happened that led to the arrested but a good twenty cops bolted forward to arrest these three people #cdnpoli pic.twitter.com/lUYcuTGOpV

The Ottawa Police have since tweeted that a total of four people were arrested, and the “incidents include assaulting officers.”

The situation has been resolved, and three people have been arrested.
~
La situation a été résolue, et trois personnes ont été arrêtées.

Topp, who served for 28 years in the Canadian Armed Forces, began his march from Vancouver to Ottawa in February, after being inspired by the trucker Freedom Convoy that took place in Ottawa. He said seeing the truckers fight for Canadians’ freedoms gave him new hope and strength and faith in the working class.

James Topp has arrived at the War Memorial in Ottawa to lots of cheering from the crowd that has gathered here #cdnpoli pic.twitter.com/8aZsYR7s1n

Shortly after he finished a speech to the crowd asking for no violence, police made their arrests.
This story is still developing…