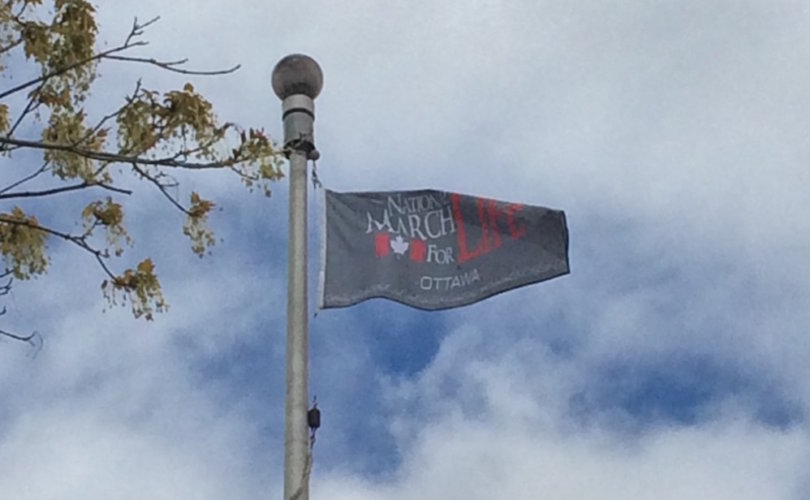 OTTAWA, May 2, 2018 (LifeSiteNews) — The City of Ottawa has refused to issue a proclamation declaring May 10 as March for Life Day, but Campaign Life Coalition says that won’t stop thousands of people showing up at the nation’s capital next week to do just that.

“We were not surprised, but that doesn’t mean that we won’t be out there joyously proclaiming that life begins at conception and that it’s our duty to protect it,” says Margie Mountain, co-chair of Campaign Life’s March for Life committee.

“We march because 300 babies are killed in the womb every day in Canada, and this has to stop. A city proclamation or a flag-raising would be encouraging, but it doesn’t change the status quo. That has to change, and we have to change it,” says Jeff Gunnarson, vice president of Campaign Life Coalition.

He urged pro-lifers to join the country’s largest annual pro-life event next Thursday on Parliament Hill under the theme Pro-life: ALL. IN.

March organizers received an email last week from the City of Ottawa’s protocol department that according to procedure, a proclamation “will not be issued for matters that are politically or religiously motivated or represent individual conviction.”

For that reason, “the City will not issue the proclamation requested by your organization,” it stated.

This is the first time Ottawa has refused Campaign Life Coalition’s request for a proclamation since 2011, when the pro-life organization initially asked Mayor Jim Watson to declare “Respect for Life Day” in the nation’s capital on the day of the march, Mountain told LifeSiteNews.

But the decision wasn’t unexpected, given that Watson said as much in October, reported the Ottawa Citizen.

“The right-to-life proclamations, as of now, will no longer be permitted,” Watson said then.

“It’s either you get rid of them all, which hurts a lot of organizations, or you have a policy that is very clear that we’re not going to use the proclamation or the flags for religious issues that fall completely outside our jurisdictions, and I think what the clerk did was very good work, and I’m pleased with the results.”

Mountain countered in a letter to the city asking it to rethink the decision that the March for Life is not “religious or political — it’s basically a human rights march.”

Watson had asked the city to review its proclamation protocol after a firestorm of protest arose last year when a pro-life flag was raised over City Hall the morning of the March for Life.

The doing of retired RCMP intelligence officer Frank Barrett, the flag was quickly removed after seven councillors signed an open letter demanding it be taken down, Twitter erupted with anger, and the media turned a critical spotlight on Watson’s administration.

Barrett insisted he had permission from the city, and that the flag was removed because Watson was “embarrassed” by the backlash. The reason the city gave him for backpedaling on its decision was that Barrett applied as an individual, not a group, and so didn’t qualify.

Campaign Life Coalition’s Matt Wojciechowski says the 89-year-old Barrett is a stellar example of being “Pro-life ALL. IN.”

“Frank’s efforts and the discrimination pro-life Canadians faced from the city last year, reignited a national conversation on abortion, and the silencing of pro-life speech and expression,” he told LifeSiteNews.

Barrett is also exemplary for witnessing outside the Morgentaler abortion center on Bank Street, until he and pro-lifers were pushed back in February by the Ontario Liberal government’s sweeping “bubble zone law,” which bans pro-life witness within 50 meters Ontario’s eight abortion centers.

Mayor Watson had a hand in this as well, lobbying the Liberals in May 2017 to bring in provincial legislation at the behest of Ottawa’s Morgentaler abortion center and Planned Parenthood of Ottawa, who alleged pro-life advocates were “harassing” women on their way to the facility.

Pro-lifers counter Bill 163 harms women by denying them accurate information on abortion and life-saving offers of support and assistance at a time when they need it most.

The law has forced Campaign Life to alter the traditional March for Life route this year to bypass the Morgentaler abortion center.

But that will not deter pro-life marchers, Gunnarson reiterated.

“No matter what our so-called leaders, abortion extremists Prime Minister Justin Trudeau, Premier Kathleen Wynne, and yes, we’d have to add Mayor Jim Watson to that, no matter what they, or some in the media, or abortion activists say or do to silence us and restrict our freedom of expression and assembly, we will march,” he told LifeSiteNews.

“We march because 100,000 babies are aborted every year in Canada, and that has to end.”

The March for Life marks May 14, 1969, the day Pierre Elliott Trudeau’s Liberal government legalized abortion under the omnibus bill, opening the door to abortion on demand. On January 28, 1988, the Supreme Court struck down law as unconstitutional, leaving Canada with no federal law on abortion.

“Anyone can join us, any religion or no religion,” Mountain told LifeSiteNews.

“You can be there, and you should be there.”

For more information on the March for Life on May 10, go here. For a schedule of events, go here.