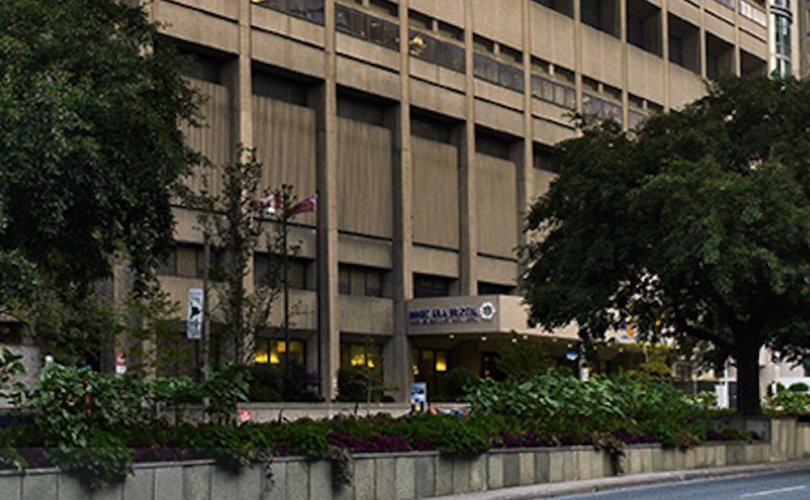 TORONTO, August 3, 2016 (LifeSiteNews) — An Ottawa-area woman is appealing an Ontario Human Rights Tribunal ruling that Mount Sinai Hospital did not discriminate against her when it refused last May to abort one of her healthy twins.

OHRT adjudicator Brian Cook ruled July 18 that Mount Sinai Hospital’s decision to refuse a 45-year-old woman, referred to only as C.V., a “selective reduction” abortion was medically based and did not constitute discrimination.

“A doctor is not required to perform a procedure that the doctor believes is not medically appropriate,” he wrote in his judgment.

Meanwhile, the Toronto hospital has contended that its refusal hinged on “the conscience of the clinicians,” but has since produced a policy asserting that “the ethical principle of patient autonomy must be given primacy.”

Cook wrote that Mount Sinai regards this statement as no different from its previous unwritten policy, but the policy does require a conscientiously objecting physician to provide an effective referral.

Mount Sinai did not respond to calls from LifeSiteNews by deadline.

C.V.'s lawyer Amir Attaran told the National Post his client is contesting the OHRT decision, and may ultimately go to court for a judicial review.

C.V., who became pregnant through IVF, “decided she did not want to have twins” and was referred to Mount Sinai for a “fetal reduction” in May 2015, Cook wrote.

According to the Post, C.V.’s obstetrician predicted she was “eight times more likely to lose the whole pregnancy if she carried both fetuses to term.”

However, a Mount Sinai obstetrician stated that the hospital would not do the “reduction” because the twins were healthy.

(In a selective reduction abortion, a needle is inserted into the mother’s womb through her abdomen, guided by ultrasound, and the selected baby, usually the smallest one, is killed by an injection of potassium chloride, which stops the child's heart.)

At that time, Mount Sinai’s unwritten “multidisciplinary consensus policy based on medical risk determinations” was to abort one child in the case of triplets “because of the increased risks associated with triplets,” and, in the case of twins, to abort a child with abnormalities — but not when there is “no fetal abnormality,” Cook wrote.

The “consensus policy” also allowed aborting both twins, which it viewed as “essentially the same as [a] request for an abortion by a woman pregnant with a singleton,” he wrote.

Two days after Mount Sinai refused C.V.’s request in a brief email which concluded that “there are centers in the U.S. that will do this but we do not,” Attaran filed a complaint with the OHRT.

A professor in the Faculties of Law and Medicine at the University of Ottawa, and Canada Research Chair in Law, Population Health and Global Development Policy, Attaran took on the case pro bono.

C.V., who has an older child also conceived through IVF, told the Post that after she filed her complaint, Mount Sinai referred her to Toronto’s Sunnybrook Health Sciences Centre, which aborted one of the twins.

Her lawyer obtained the hospital’s current policy through an Access of Information request. Attaran told the Post that Mount Sinai’s lawyers told him that “we don’t want to be known as a hospital that does abortions,” and that C.V. then refused the hospital’s offer to settle for $55,000.

Attaran told LifeSiteNews in an email that his client “is motivated by health reasons.”

“I understand LifeSiteNews is a religiously-motivated publication and ideological in a Christian sense,” he added. “Your religious ideology is of no concern to my client, as her reproductive choices should be no concern of yours.”

“This case points out how little respect there is for life of any kind in the womb,” she told LifeSiteNews.

“Choosing first of all to have a baby by in vitro, secondly, to decide, well, gee, I’d like this one and not that one … and I don’t want anybody to tell me there’s anything the matter with doing this,” Douglas said.

“What’s she going to say to that child that survives? This is how badly we have degenerated in terms of any kind morality in regard to the womb.”

This “reverse of Solomon’s wisdom” also underscores the urgent need “for a law in the country that protects the unborn child the womb the way it should,” she said, adding, “It’s a wonder anyone survives the womb. It’s the most dangerous place in the world to be.”

“It used to be that we would look upon the IVF technology as being an aid in the creation of this miracle, but now I wonder whether it hasn’t just basically made the creation of a new life into a run-of-the-mill science experiment. … Does nobody have a sense of awe or wonder anymore?”

“I cannot and never will begin to understand how it is that a woman who wanted children badly enough to subject her body to IVF treatments, gets pregnant, and then goes for abortion,” Mrozek wrote on her blog at ProWomanProLife.

Meanwhile, the Post reported in 2010 that requests for selective reduction abortions of one child of twins for socio-economic reasons was on the rise.