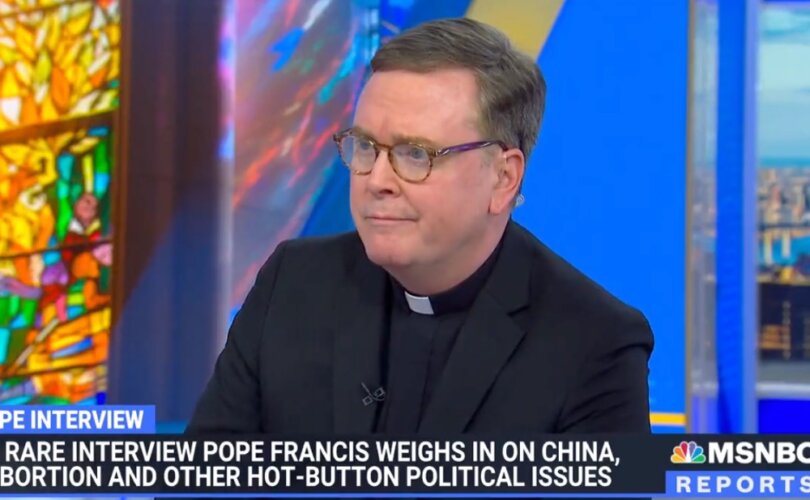 (LifeSiteNews) — The president and outgoing editor-in-chief of America Magazine, Father Matt Malone S.J., has joined MSNBC as a Papal contributor, despite the TV network’s far-left credentials and frequent support of abortion.

Speaking to Jansing, Malone stated he believed Pope Francis wants bishops to “lead differently than they have been.”

Referring to Francis’s comments on abortion in the America interview, the Jesuit stated that “when bishops or priests are acting too much like politicians instead of like priests, then we get into trouble. He also praised Francis for enacting an “entirely new genre of Papal communication.”

“This is an entire new genre of papal communications.” @Americaeditor on his exclusive interview with Pope Francis. pic.twitter.com/hsJyJVjvSJ

Malone has been editor-in-chief of America Magazine for ten years, and is now replaced by Father Sam Sawyer, S.J. as of December 1. Ordained in 2012, Malone joined America first in 2007, serving two years as an associate editor.

Malone has been widely credited by his America colleagues with much of the magazine’s current success, including by prominent pro-LGBT priest Father James Martin, S.J.

Dear friends: Today is Matt Malone, SJ’s final day as editor in chief of @americamag and I’d like to thank him for all his hard work for the last ten (!) years. For me, Matt’s most notable accomplishments (of many) are successfully moving us from our old offices to our new… pic.twitter.com/fKVHkD02fS

In a lengthy interview to mark his departure as editor-in-chief, Malone highlighted and praised how America had grown under his tenure. America, known amongst faithful Catholics for its promotion of dissident takes on Catholic teaching, experienced a growth in readership under Malone’s leadership. “I think that there are very few people who have read America for the last 20 or 30 years who would like to go back,” he added.

Malone’s arrival to MSNBC comes in light of a number of prior appearances on the network. However, MSNBC is among certain mainstream media networks which have prominently promoted abortion and taken aim at pro-lifers and conservatives in the U.S.

Earlier this summer, MSNBC hosted the producers of pro-abortion film The Janes, which focussed on the illegal murder of babies by “female heroes of history” before abortion was legalized nationwide in 1973.

In the context of Donald Trump’s 2016 election victory, MSNBC interviewed Planned Parenthood President Cecile Richards about the upcoming “risk” to abortion. MSNBC host Rachel Maddow raised her concerns about whether the abortion giant had a “doomsday scenario” in place following Trump’s win.

During the course of Joe Biden’s 2021 inauguration, MSNBC highlighted its opposition to conservatives, with host Nicole Wallace arguing that Conservatives would have to demonstrate that they could “assert the truth” before being “allowed to share any other views.”

Such is MSNBC’s reputation on matters of faith and life, that Archbishop Charles Chaput of Philadelphia warned in 2011 that Christians “make a very serious mistake” if they turned to outlets like the New York Times, Newsweek, CNN, and MSNBC “for reliable news about religion.”

The dumbest theory of pro-life ulterior motives yet, courtesy of MSNBC

MSNBC host: ‘Girls, get your abortions NOW in case the Republicans win’