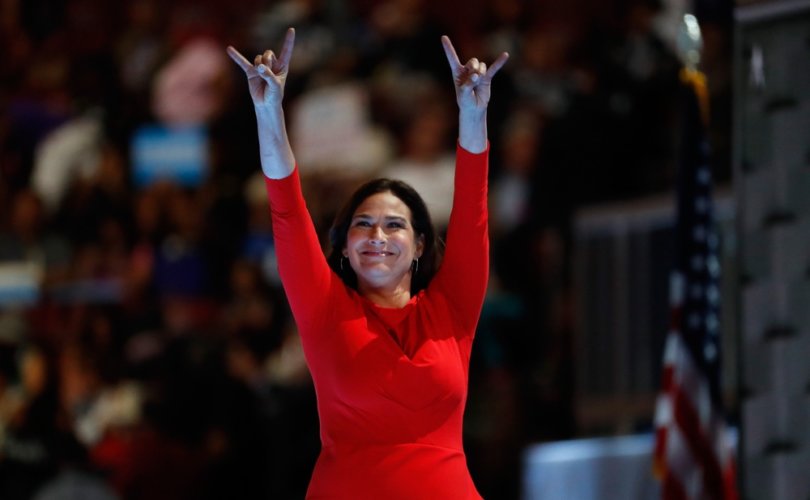 February 11, 2021 (LifeSiteNews) – Ilyse Hogue, president of pro-abortion organization NARAL, announced Monday that she will step down in May.

Hogue, who proudly boasted at the Democratic National Convention in 2016 about procuring an abortion in an attempt to “destigmatize” the act, has served as president of NARAL since 2013 and is responsible for expanding the organization’s membership four-fold. She is also the author of the pro-abortion propaganda book and podcast “The Lie That Binds,” allegedly a “research driven history of the right-wing anti-choice movement and its connections to white supremacy and an agenda to undercut democracy,” according to NARAL’s press release announcing Hogue’s departure.

In an interview with The New York Times, Hogue expressed concern that Roe v. Wade, the U.S. Supreme Court decision that imposed abortion on demand on all 50 states, is not “safe.” Hogue warned that “constant vigilance is required to secure all of our rights.”

She explained that her fear for the future of Roe stems from the supposedly conservative leaning Supreme Court: “The peril to Roe, the peril to (so-called) reproductive freedom comes from the courts.”

“But the courts are powerless without legitimacy and the support of the people,” she said. Hogue added that “one of the things we’ve (pro-abortion supporters) been so successful in doing in the last eight years is making people aware that the courts have been used for a political tool, and that they have to be held to account.”

Hogue observed that “politically it is not a salable (sic) point anymore that you can’t be an active champion,” of access to abortion. Celebrating this development in politics, she pointed out that “We had every single Democratic presidential candidate release a plan on how they’re going to address the crisis in reproductive freedom. We had them outcompeting each other in debates.”

Despite this apparent victory, Hogue expressed the need to eradicate any anti-abortion sentiment from the Democratic Party, saying “there is zero room in the party for people who would oppose the seven in ten Americans who don’t think politicians should be governing their decisions about pregnancy and family.” She, like many other pro-abortion activists, persists in making the specious claim that 77 percent of Americans support abortion.

Taken broadly and without clarification on what Roe v. Wade actually entails, one will arrive at the percentage support to which Hogue clings. But when more details are given, especially that Roe permitted, as a constitutional “right,” abortion up until birth, that number dramatically drops, to around 18 percent support. Thus, it cannot reasonably be claimed that the majority of Americans want pro-abortion legislation.

“We’re seeing a sea change by letting the right own the narrative for so long.”

LifeSiteNews spoke to Dr. Michael New, Ph.D, associate scholar at the pro-life Charlotte Lozier Institute. Like Hogue, New recognizes the uphill struggle faced by supporters of Roe, noting that “During her tenure, Hogue was unable to stop or even slow the legislative and political gains made by pro-lifers.”

“Since 2013, pro-lifers succeeded in passing over 350 pro-life laws at the state level. Additionally, during his time in office, President (Donald) Trump was able to appoint over 200 federal judges, including three Supreme Court judges,” New said. “This means that many of these protective pro-life laws will receive a more favorable hearing during various legal challenges. Additionally, the U.S. abortion rate continued its steady decline. Although there were some reports of a slight uptick in the abortion rate in 2018, Guttmacher Institute data indicates that the U.S. abortion rate fell by over 11 percent between 2013 and 2017.”

Although NARAL will select a new president, New said its efforts will be as futile as “rearranging the deck chairs on the Titanic.”

“As ultrasound technology continues to improve, more people will reject abortion and fewer physicians will be willing to perform abortions,” he predicted. “More pro-life laws will be passed, women facing unintended pregnancies will receive more support, and a higher percentage of unintended pregnancies will be carried to term. The successful political, educational, and service efforts of pro-lifers have played a key role in the 50 percent decline in the U.S. abortion rate since 1980. Supporters of legal abortion may win short term victories here or there, but the future of the country is clearly pro-life.”

Planned Parenthood, the country’s largest abortion provider, has faced numerous struggles from within its own ranks in recent years, seeing a high turnover in its management.

In 2019, then-president and chief executive Leana Wen was ousted by board members less than a year after replacing previous president Cecile Richards. Richards’ own departure, after 12 years in the position, was marred by the scandal that Planned Parenthood abortion facilities trafficked in the procurement and sale of aborted baby body parts.

According to The New York Times, the board wanted to exchange Wen for “a more aggressive political leader” who would resist more resolutely nationwide legislative efforts to quash abortion.

Wen complained that her tenure was ended in a “secret meeting,” despite engaging in “good faith negotiations” beforehand.

Emphasizing Planned Parenthood’s push for abortion as more than simply a small part of what they do, Wen later said “there was immediate criticism that I did not prioritize abortion enough,” and was also reportedly faulted for concluding that “trans-inclusive language” would “isolate people in the Midwest.”

In addition to problems in the hierarchy, Planned Parenthood has struggled to maintain brewing racism in the lower ranks. Beside targeting the lives of black children in the womb, black employees of Planned Parenthood have complained after experiencing “acts of racism and anti-Blackness from their white colleagues.”

In spite of Planned Parenthood’s supposed “social justice-driven mission,” the Anti-Oppression Resource and Training Alliance (AORTA) discovered that black employees, both past and present, “feel that Planned Parenthood’s treatment of them internally” has not been “in line” with these values.

“Black employees told AORTA they regularly experienced acts of racism and anti-Blackness from their white colleagues but found that when they reported problems to human resources, there was ‘no meaningful consequence or accountability for racial harm,’” BuzzFeed reported in October. “The employees said they had been experiencing these issues and bringing them to management’s attention for years, but felt that little had been done to change the problems.”

Buzzfeed noted the problems extended to the culture at NARAL, too:

AORTA’s findings line up with an investigation published by BuzzFeed News in August, which detailed allegations of racism and discrimination at Planned Parenthood’s state affiliate chapters, as well as at NARAL Pro-Choice America, another major reproductive rights group. Twenty-six sources at both organizations told BuzzFeed News at the time that they regularly faced racism at work and were belittled by their bosses, while their non-Black colleagues were not, and felt they often had nowhere to turn for help with these issues. They also said they were unable to move up within the organization, while their white colleagues were promoted.