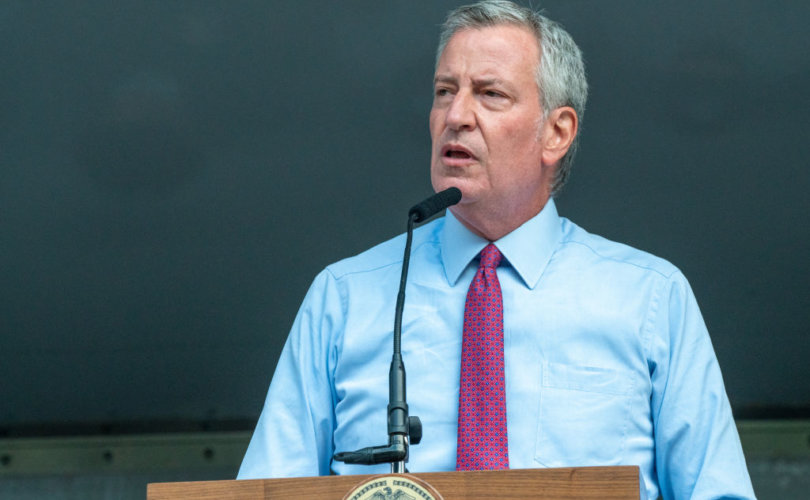 NEW YORK (LifeSiteNews) – The outgoing Democrat mayor of New York City, Bill de Blasio, is demanding that the state’s governor institute a COVID jab mandate to ride the city subway, as well as for transit workers.

“We know vaccine mandates work — New York City is proof of that. Now let’s go even further. I’m urging @GovKathyHochul to institute an MTA vaccine mandate. Let’s do what we can to keep our city, our residents, and our workforce safe,” tweeted de Blasio Tuesday.

The mayor’s tweet came the same day as he told reporters that MTA (Metropolitan Transportation Authority) workers need to be “vaccinated for the safety of each other and their families, their communities, for the safety of the passengers.”

De Blasio then boasted that the same tactic “worked” for the “New York City workforce,” so “it can work for the MTA as well.”

“The MTA’s unionized workforce, and millions of transit riders, are grateful this Thanksgiving that Mayor de Blasio does not run the subway and bus system — and is finally heading out the door,” said Utano. “The current system in which transit workers have a choice to be vaccinated or be tested regularly is working while we continue to educate and urge members to get the shot.”

Just recently, the U.S. Centers for Disease Control & Prevention (CDC) had to admit that they do not know of any examples of an un-jabbed person transmitting the COVID virus to someone who has natural immunity.

NYC recently elected Eric Adams, a former police chief, as the city’s next mayor. Adams will take over from de Blasio on January 1, 2022.

New York Gov. Kathy Hochul said regarding de Blasio’s request that there is currently no problem with the MTA workers and the jabs, as most have been vaccinated, and all others take weekly tests, CBS New York reported.

De Blasio first announced the New York City jab mandate back in July. It was recently expanded to include all public employees, who must take the abortion-connected COVID injection or be fired. Weekly COVID testing is not an option.

The Fire Department of the City of New York (FDNY) had to close temporarily a whopping 26 fire stations in the city due to de Blasio’s draconian jab mandate.

Thousands of New Yorkers rallied together Saturday to protest mandatory COVID-19 jabs as part of the “World Wide Rally For Freedom.”