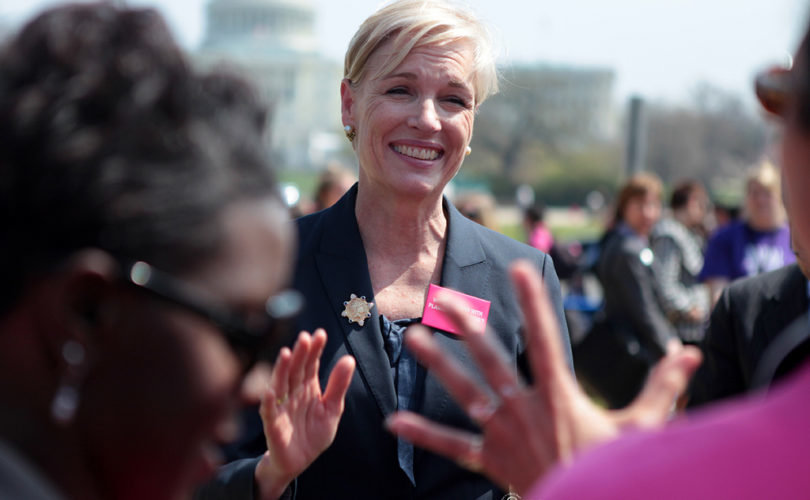 On Tuesday, Vox's culinary site Eater published an interview between Valenti and Richards. Called “Red Sauce and Reproductive Rights,” their filmed conversation focused on “baking, women's health, and the fight in Washington.” As Valenti shared the story of her own abortion, Richards agreed that #MeToo is connected to the abortion movement.

According to Valenti, she chose to interview Richards because she wanted “everyone to know this incredible woman for who she really is”: a “leader for women” as well as a “funny and warm force of nature.”

“Because of the work Planned Parenthood does,” Valenti added, “Richards and women's health leaders like her often get dehumanized – flattened in the same way that political issues do.”

She's right, dehumanization is wrong – including for those in the womb. But according to Planned Parenthood's most recently published annual report, the organization performed 321,384 abortions and received $543.7 million in “government health services, reimbursements & grants” for the year 2016-2017.

Even so, Valenti stressed that Planned Parenthood translated into a “family organization” for her. To show that “warmer” side, she interviewed Richards at Butter & Scotch, a Brooklyn bakery and bar that gives one dollar of every item sold to Planned Parenthood.

The two began by talking about pies (“all-butter crust” is the way to go) and women running for office. But when Valenti asked what Richards was “most concerned about” in today's world, Richards delved into abortion.

“Some people think that all the fight in Washington is simply about the right to safe and legal abortion,” Richards said. They weren't wrong, she said, except for that the fight includes “access to birth control.”

Tell Congress to keep their promise and defund Planned Parenthood.Sign the petition here!

Speaking of activism, Valenti asked Richards if there was a connection between the #MeToo movement's slogan “Believe Women” and the “big pro-choice” slogan “Trust Women.”

Richards responded with a yes: “I do think that's true.” (Way to dismiss pro-life women who have said “Me too.”)

“The whole idea that, and particularly around the issues that Planned Parenthood works on, that people are the best to make to make their own decisions about their pregnancy, not the government,” Richards argued, referring to abortion.

Richards and Valenti also stressed the importance of storytelling. Richards demonstrated by remembering one San Diego clinic that was filled with men in the waiting room for “Vasectomy Day.” Instead of soap operas, the TVs played ESPN for a change.

Besides stories, Richards emphasized young people should have role models, like Valenti, to “look up to.”

That may be partially because of Valenti's own two abortions. While she has written on them before for The Guardian, she elaborated on one while placing a bright red sauce in the blender (not the best visual).

“My pregnancy with Layla had nearly killed us both,” she said, referring to her 7-year-old daughter. Even so, when she became pregnant again, the “hopes I had tucked away, of Layla helping me feed a baby, of sisters holding hands or pulling each others' hair, came back to torment me, whispering, maybe.”

After all, she risked her life to have Layla, she said.

“When I got sick with Layla, I thought I wanted to be the mother who dies for her pregnancy,” she urged. “I told the doctors to keep her in, that I didn't matter.”

But not this time.

“I knew that I didn't hate myself to die, and that I loved her enough not to,” Valenti continued. “And with that, the choice was made.”