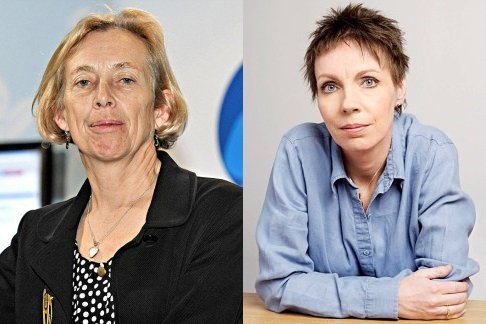 Close links have been revealed between Cathy Warwick (left) and BPAS, run by Ann Furedi (right)

May 16, 2016 (SPUC) — The Royal College of Midwives is coming under fire for its close links to the abortion industry, after announcing that they will be joining BPAS's extreme campaign for full decriminalisation of abortion on demand up to birth.

The RCM, which is Britain's biggest maternity union – representing nearly 30,000 midwives and health workers – is calling for women to be allowed to terminate an unborn child at any stage of pregnancy, for any reason, with no criminal sanctions.

Under the current abortion law, two doctors must certify that a woman meets at least one of the grounds to have an abortion, up to a time limit of 24 weeks of pregnancy. After that limit, abortion is allowed if doctors suspect the child may be severely disabled or believe the mother’s life maybe in danger.

In reality though, the law has become a farce – as women are regularly mis-certified for abortions under the grounds of mental health, and babies with abnormalities such as cleft palate and club foot are aborted all the way up to birth. Over 90% of children diagnosed with Down’s syndrome before birth are also aborted.

Now the RCM wants to see abortion treated as if it was just a normal medical procedure.

They announced their new policy formally in a new 'position statement' published last week, but are now on the receiving end of a fierce backlash from their own members.

Around 200 midwives and maternity workers have signed a letter to the union’s board, condemning the move as “utterly unacceptable” and demanding to know why ordinary members have not been consulted.

'Not in our name'

“For the organisation that represents us to support the radical position that all protections for unborn children should be removed right through to birth, and without any consultation of us members, we find utterly unacceptable,” the letter states.

“We, the undersigned, therefore wish to state that the RCM does not speak in our name.”

One of the signatories was Michelle Viney, a midwife of 15 years’ standing, who said to the Daily Mail:

“Why could the RCM think it could do this without asking any of their members? I find it so shocking.

“I financially support it, but I wouldn’t want to be paying a fee towards an organisation which is going to be campaigning for something which, morally, I 100 per cent disagree with.”

SPUC funded a legal appeal by senior midwives Mary Doogan and Connie Wood from Glasgow who explained to the Supreme Court in 2014 why they refused to supervise abortions. The RCM intervened against the midwives to argue that if they did not want to help kill an unborn child themselves, they should be forced to tell other midwives do so. The court found against Mary and Connie and in favour of the pro-abortion RCM.

And in a further twist, the Daily Mail have revealed a staggering degree of collusion between the RCM and the British Pregnancy Advisory Service (BPAS), one of Britain's largest abortion providers.

BPAS runs abortion centres nationwide – such as the one in Leamington Spa which recently closed down – and receives £25 million in public funding to perform over 63,000 per year on behalf of the NHS.

But Cathy Warwick, the RCM's Chief Executive and General Secretary – with an annual salary of £155,000 – has also been a trustee of BPAS for at least five years. Furthermore, in 2014 she became the chair of the abortion giant, with ultimate responsibility for the strategy and direction of BPAS.

For some reason, her position at BPAS is not mentioned in her RCM biography.

BPAS is led by Ann Furedi, its Chief Executive – with an annual salary of £145,000. She is on record as saying that abortion should be accepted as “an essential method of family planning.”

Since Professor Warwick became Chair of Trustees, BPAS has taken an increasingly political direction. One of their key objectives is to “expand our advocacy for the decriminalisation and destigmatisation of abortion throughout the UK”, according to corporate papers.

It seems that this advocacy extends to silencing the voices of ordinary midwives, and promoting an extremist agenda of abortion at any time, for any reason.

“Mothers have a right to object”

“Midwifery is a caring profession, and most women training to be midwives do so because they care about babies and want to serve mothers and babies. Abortion is a total contradiction of that. Abortion kills babies and harms women, sometimes fatally.

“The RCM's new abortion statement marks a further shift of the union towards the radical killing ideology of the pro-abortion lobby. Currently, most abortions performed in labour wards are on babies with disabilities like Down's Syndrome or spina bifida. This has a damaging effect on the doctors, midwives and nurses involved, causing many of them long-term regret, but in a few cases making them radical advocates for killing. In future, the pro-abortion RCM wants to make it legal to kill any baby at any stage without any reason.

“Expectant mothers have a right to express a preference for how they are treated, and one thing they can do is ask to be treated by a midwife who does not subscribe to the pro-abortion RCM. They can make this request early in their pregnancy. They don't have to wait till they are in labour. RCM has politicised the role of midwives by supporting change in the law to allow the killing of more babies, but mothers have a right to object.”

“Just as women would be entitled to ask not to be treated by members of a group that supported the killing of black people or disabled people, so they have all the more right to ask to be treated by someone who does not kill unborn children,” concluded Mr Tully.