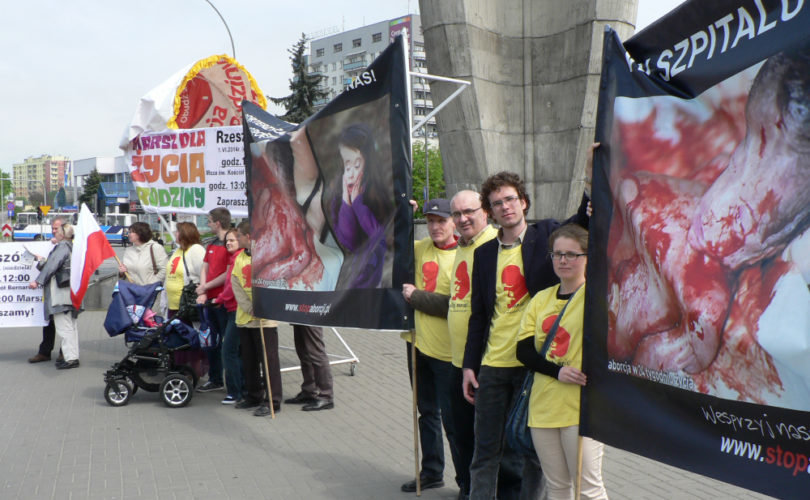 Polish pro-life activists protest outside Pro-Familia hospital in Rzeszów. Jacek Kotula is third from the right.Courtesy of Jacek Kotula

An October 16 ruling against two pro-life activists in Poland has sent shockwaves through the nation. Judge Magdalena Kocój ordered the activists to apologize for their demonstrations outside a hospital that performs abortions and said they could no longer say the hospital is “killing” babies.

The Specialist Hospital Pro-Familia in Rzeszów took the two activists, Jacek Kotula, 48, and Przemysław Sycz, 35, to court. The two are members of the famous Right to Life Foundation whose street demonstrations feature graphic abortion pictures.  The activists spread information about abortions performed at Pro-Familia, organizing pickets in front of the clinic, in the town, and at sporting events.  Kotula and Sycz also publicized their actions on Facebook.

Pro-Familia Hospital responded by filing a case in civil court and another in criminal court, alleging that the men were defaming the hospital.  Defamation is considered a crime in Poland, and can be punished with fines and imprisonment of up to one year.

The conflict began last January when Senator Kazimierz Jaworski called a press conference where Agata Rejman, a midwife at the hospital, discussed abortions performed there.  Her emotional testimony was widely covered by Polish media.

Pro-Familia Hospital would not tolerate this publicity.

Shortly after her public appearance, Rejman got a letter from the hospital threatening legal action if she didn’t retract her “false statements,” most importantly regarding “killing children.” The hospital also demanded that she pay 50,000 złotych (approximately $17,000) for a children’s hospice. Rejman is no longer working at this hospital.

Now, the hospital is trying to silence Kotula and Sycz.

The men organized 18 pickets in defense of the unborn; now they have to defend themselves, too.

The cases are based on the allegations that the activists were disseminating false information when they equated abortion with killing. According to the plaintiff, “pregnancy terminations” cannot be called killing unborn children.  The hospital claims that by doing so, the defendants generated negative publicity in the media and harmed the hospital’s business.

The judge in the civil court agreed with the hospital.  After a closed session on October 16, Judge Magdalena Kocój ruled that Kotula couldn’t say that the hospital kills babies. She further ruled that he had to apologize to the hospital through the media.  She even chose his words for him, ordering him to say verbatim: “ [by] organizing pickets and manifestations in defense of unborn children, I was spreading false information about the work of the hospital Pro-Familia in Rzeszow.  In particular, I was spreading information that the babies in this hospital were being killed.” Finally, the judge ordered the pro-lifers to pay all court fees.

Judge Kocój refused to hear any witnesses and kept the explanation of her judgment confidential. The media filmed her, but she demanded that her face not be shown.

The verdict stunned many Poles.  “We can’t say that abortion is killing?” asked Senator Jaworski on his website. “This is shocking in itself. But what’s more, we are not even allowed to find out why. This is impossible for me to understand.”  Jaworski wrote to a higher court asking for an explanation.

Tomasz Terlikowski is similarly baffled.  Terlikowski is a leading pro-life commentator from Republika TV, a private television station.  He wrote in the daily Rzeczpospolita that this case means freedom of speech in Poland is granted selectively.  He added that the court’s decision also shows that a number of people in the justice system are in the service of lies. Even the strongly pro-abortion daily, Gazeta Wyborcza, published an article criticizing the judgment against the pro-life side.

Polish law clearly defines a child as a person from the moment of conception. Many medical textbooks also use the word “fetus” and “child” interchangeably. The most prominent Polish encyclopedia states that killing means taking a life. And a so-called pregnancy termination, or abortion, obviously does take a life.

Even if the court disputes those facts, Kotula’s rights have been violated because the Polish Constitution guarantees freedom of speech.  Additionally, freedom of expression is protected in the European Union’s Convention for the Protection of the Human Rights and Fundamental Freedoms.

Ludwik Skurzak, Kotula and Sycz’s lawyer, is planning to appeal the ruling.

While the case is being appealed, however, the lower court prohibited the defendants from using the term “killing children” in connection to Pro-Familia, both in media and during pickets.  This injunction will be in force for one year.

Despite the negative outcome, Kotula is unfazed. “Censorship is back in a ‘free’ Poland,” he says, promising that the pickets will not stop.