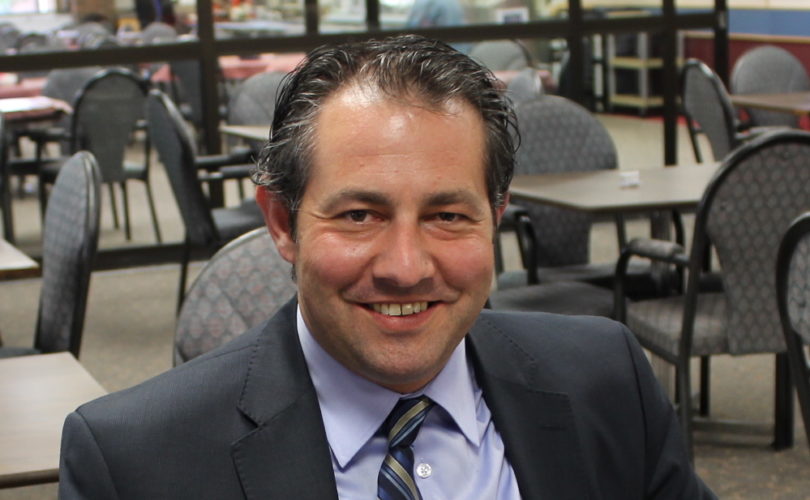 Hillyer, who had complained Tuesday of feeling unwell, was found dead in his office early Wednesday morning, according to the CBC, which reported that Hillyer’s family contacted Parliament Hill security after they couldn’t reach him.

A Mormon and father of four, Hillyer was first elected as Conservative MP for Medicine Hat—Cardston—Warner in 2011.

“His passing is really sad for me, personally,” says Jack Fonseca, project manager for Campaign Life Coalition.  “And it’s a terrible loss to the pro-life/pro-family movement.  He was a good man and a faithful Mormon.”

“Our elections team worked closely with Jim on his nomination and we were impressed by his strong convictions of faith, and ardent desire to protect unborn children.”

“It breaks my heart as I think of his wife and four children. God rest his soul and bless his family at this tragic time.”

The cause of death is not yet known. The CBC reported that Hillyer had leukaemia in 2013, and underwent surgery this February for recurring bone infection in his leg, which had persistently troubled him following a ski accident three years ago.

Question period has been cancelled for Wednesday and tributes from MPs are scheduled for 2 p.m., after which Parliament will adjourn for the day.

Hillyer leaves behind his wife Livi, and children London, Taylor, Nation, and Asia.

The Tory MP was outspoken about his convictions, telling the Medicine Hat News in September 10, 2014: “I have declared, wildly and boldly in my first nomination, that I am pro-life and whenever a pro-life question comes up, I will vote pro-life.”

He was also attacked for his convictions.

Hillyer sent a questionnaire to his constituents in July 2014, asking if people agreed with him that abortion is not a human right and that Canadian tax dollars should not pay for abortion in other countries.

Hillyer told the Lethbridge Herald at the time that he sent the questionnaire in response to Liberal leaderJustin Trudeau’s declaration that no one who intended to vote pro-life could run in the party’s ‘open’ nominations, and in response to the Liberals' push to fund abortion overseas.

“Jim was a valued and hardworking member of the Conservative team, and a passionate advocate for those he represented,” stated Conservative Interim leader Rona Ambrose.

“More than that, he was a dedicated husband and father, and a man of strong faith and conviction. I pray that his and his family's faith will help them through this very difficult time.”

Fonseca recounted how Hillyer's strong commitment to the pro-life cause came through in their work together:

In 2014, I actually spent a lot of time talking with MP Jim Hillyer on the phone and via email, when CLC was conducting a membership and volunteer recruitment drive for his nomination race.  Initially, we were helping recruit new memberships to secure the nomination in his old Lethbridge, AB riding. Then, when another MP in the neighbouring riding of Medicine Hat-Cardston Warner announced he wouldn’t run during the next election, Jim decided to run there instead, and asked for our help in that nomination race.  He was a strong pro-lifer, so we didn’t hesitate to start all over with a new membership and volunteer recruitment drive.

In dealing with Jim, I got to learn about his deep pro-life, pro-family and pro-religious freedom convictions.  I was also honoured to help educate him a bit more in areas that he didn’t have a lot of knowledge.  I recall one time on the phone with Jim when it dawned on me that he had never personally attended the National March for Life in Ottawa.  So I said, “Hey Jim. You’re pro-life. You really need to join us on the steps of Parliament Hill at next year’s March.”  Jim said, “Jack, I promise you I’ll be there.”  And true to his word, on May 14, 2015, Jim was up there on the steps, shoulder to shoulder with the other pro-life MPs.

I remember another time where Jim sent me an email with an advance copy of a mailer he was about to distribute in his riding, which condemned a Liberal Motion to send Canadian tax dollars to fund abortions in Africa.  Jim was personally very proud to show us that he was standing up for pro-life principles in his capacity as an MP. And, I was very proud of him.

I pray now for his wife and children that they may be comforted in their loss.