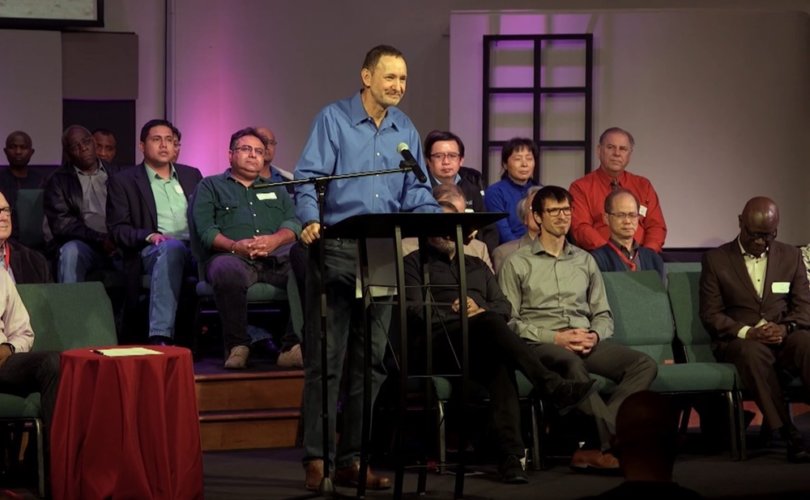 Cedar Grove Baptist Church pastor Kevin Cavanaugh and other pastors and church leaders are banding together to fight a sex-ed program teaching about homosexuality and transgenderism in British Columbia schools.

September 28, 2018 (LifeSiteNews) – Pastors and other church leaders are fighting back against the British Columbia government's SOGI 123 sex-ed curriculum with the launch of their West Coast Christian Accord.

“The church in British Columbia is waking up to the fact that there has been change and that it is not all positive,” said Cedar Grove Baptist Church pastor Kevin Cavanaugh in an interview Thursday.

The West Coast Christian Accord is a 14-point document outlining the Christian position on gender identity and human sexuality. Roughly 200 pastors and more than 1,100 church leaders had already signed this accord as of Thursday morning.

All of them intend to use the sword of the Holy Spirit, the Word of God, in their fight to stop a sex-ed program they claim is harming children.

“It's sowing doubts and confusion into the minds of very, very young children,” said Cavanaugh. “It's an oversexualization of everything. … We see it as a sexual activist agenda.”

After live-streaming their announcement of this accord on Facebook Thursday, the pastors signed a letter to be sent to British Columbia Education Minister Rob Fleming. That letter asks the education minister to stop using SOGI 123 in the province's schools.

“The likelihood of that being blown off is pretty good but it is our starting point,” said Cavanaugh. “We are concerned that what is being taught right now is not good for anyone and is detrimental.”

“God will show us the next steps to take,” he said.

In their accord, the pastors and church leaders affirm God's will for people to remain chaste outside of marriage and faithful within it. They deny that “any affections, desires, or commitments ever justify sexual intercourse before or outside marriage, nor do they justify any form of sexual immorality.”

Men and women are equal in dignity and worth as persons but different and that those differences are good, the pastors state in the accord.

“The grace of God in Jesus Christ enables sinners to forsake transgender self-perceptions and to accept the God-ordained link between one’s biological sex and one’s self-perception as male or female,” reads the accord.

The pastors' pushback against SOGI 123 started last fall in the Lower Mainland of British Columbia, the area in which Vancouver and its suburbs are located. As the pastors met to discuss the sex-ed resource, they grew increasingly alarmed with each new horror story about what they describe as “bully tactics” and “sex-activist teachers.”

Faith communities were excluded from the public discussion about SOGI 123 and some church leaders claim they were vilified in the media. Teachers opposed to SOGI 123 feared for their jobs, the pastors claim.

Meetings to inform parents about SOGI 123 often resulted in threats.

“My church was one of those targeted,” says Pastor Cavanaugh.

With the West Coast Christian Accord, pastors and church leaders in British Columbia are hoping to reclaim territory lost to what they see as those pushing immoral and harmful teachings onto children.

“For far too long, many of us in the evangelical churches throughout Canada have been dismissed, intimidated, bullied, and even threatened because of our biblical worldview regarding human sexuality, a worldview that is not only based on the time-honoured truths of the Bible, but is a view protected by Canadian law,” said Gabeli during the announcement of the accord.

In his comments Wednesday, that pastor hinted at possible future steps the churches might take to pressure the British Columbia government into repealing SOGI 123. According to Gabeli, that provincial government failed to fulfill its legal obligation to consult with parents prior to putting SOGI 123 into effect.