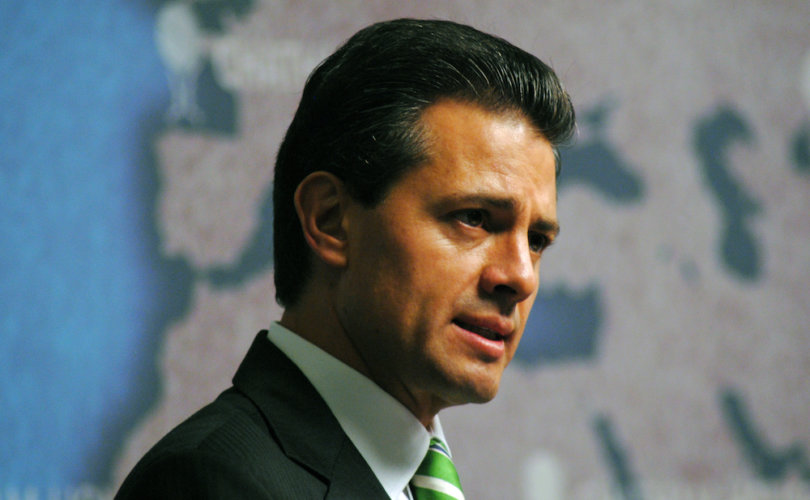 May 27, 2016 (LifeSiteNews) – A coalition of more than one thousand civil organizations have come together from 27 Mexican states to oppose the homosexual agenda of the country’s president, Enrique Peña Nieto, who announced last week that he would lead a campaign to amend the constitution to impose homosexual  “marriage” on the entire country.

The coalition, called the National Front for the Family (Frente Nacional por la Familia), is lead by Consuelo Mendoza, president of the National Union of Parents (Unión Nacional de Padres de Familia or UNPF).  The organization has sent a letter to the president’s Institutional Revolutionary Party (PRI) expressing “our most clear rejection of the equalization of same-sex unions with marriage,” as well as “our most absolute rejection of the attempts to indoctrinate our children through educational content that entail discarding fathers and mothers.”

In addition to his proposed homosexual “marriage” amendment, the president has also promised to launch nationwide propaganda campaigns for the general public as well as in the public schools, to indoctrinate students in homosexual and gender ideology.

The organizers say the campaign is “a severe blow against Mexican families, an attack on the rights of children and shows a totalitarian zeal that seeks to usurp the right and duty of fathers and mothers to educate their children.”

“It seems to us the height of authoritarianism for the government to seek to supplant parental authority,” the organization writes. “We want to emphasize that there is no right of adults to have children; the right is of minors to have a father and a mother. It is the superior interest of the minor that should prevail and not the ideological fashion embraced by the current government.”

The National Front demands that “the PRI define itself publicly and openly: either they are with millions of families that reject this initiative, or they are turning their back on the society and are betraying the immense majority of Mexicans.”

It intends to urge citizens to vote against candidates that “attack the family,” to deliver letters denouncing the initiative to all of the national and state offices of the president’s Institutional Revolutionary Party and to enter into a state of “permanent digital protest” under the hashtags #DefendemosLaFamilia (We Defend the Family) and #YoDecidoXLaFamilia (I Decide in Favor of the Family).