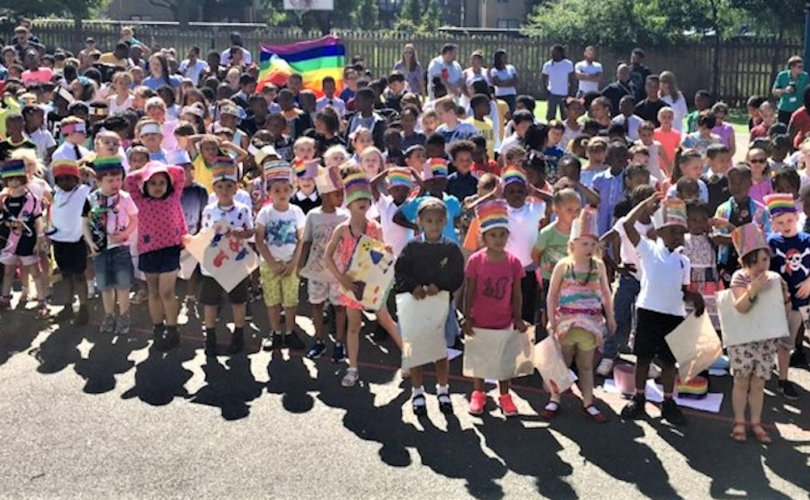 Update – July 8, 2019: Ten thousand more people have signed the petition since this article's publication, bringing the total to over 21,000 as of July 8.

Ten-year-old Kaysey and Farrell are both pupils of Heavers Farm Primary School in Croydon, a neighbourhood in South London. Last month, the children, a girl and a boy, asked their teacher if they could be excused from a lesson in which they were asked to color in LGBT “Pride Month” material. Although the children cited their religious objections, he refused and afterward allegedly accused them of “homophobic language.”

According to Christian Concern, a legal advocacy group, Farrell was accused of having said “LGBT sucks and LGBT’s dumb,” which he denies. The teacher asked the children if they wanted LGBT people to die, and they said that they didn’t. They said, however, that in their countries of origin they would be punished for being gay.

Kaysey says that, following this incident, Susan Papas, the head teacher, or principal, of Heavers Farm Primary School, shouted at the children in front of the class, calling them “a disappointment to the school.” Papas then interrogated them in separate rooms, accusing Kasey of saying she wanted to kill LGBT people. Kasey denied this but was made to sit in detention from 10 a.m. until 3 p.m.

The children were subsequently suspended from school for five days.

Papas, 59, was previously in the news for forcing children as young as four to participate in last year’s mandatory school Pride events. When Izoduwa “Izzy” Adhedo (also known as Izoduwa Montague), a Christian, met with school staff to object to her five-year-old son having to take part, her child was given four hours of detention and she herself was barred from entering the school.

During the meeting, Adhedo was confronted by Papas’ adult daughter, who was wearing a T-shirt reading “‘Why be racist, sexist, homophobic or transphobic, when you can just be quiet?’”

The following March, Adhedo announced her intention to sue the governors of Heavers Farm Primary School for a “five-figure sum.”

Adhedo was only one of a group of parents who complained that their children were compelled to take part in the June 29, 2018 “Proud to be Me” event. Ruth Anderson, one of the mothers, told the Croydon Advertiser that the 2018 event was sold to the parents as a celebration of self-esteem.

“We were given this whole story that it was all about having pride in yourself, but that's ridiculous,” Anderson said.

“There were rainbow flags around the school, and the kids were even told to wear bright colours,” she continued.

“That's not having pride in yourself. That is blatant support for LGBT.”

Anderson said she was “not homophobic,” but her faith taught her a certain set of beliefs and that she didn’t want her child’s school making choices for her.

In the 2018 controversy, the school had planned a “Pride” parade to which parents were invited. After parental protests, however, the school yanked their invitations. In retaliation, the parents who objected kept their children home on the day of the parade. This led to the cancellation of the parade and the Pride event being held inside the classrooms instead.

Anderson said at the time that Papas should be fired.

This year, Papas may have built a bridge too far, for she has been reported to the local government for unlawfully excluding Kaysey and Farrell from school.

According to a press release by Christian Concern, the suspended children’s parents have made a formal complaint.

“Parents of both children have complained to the Principal Officer — Exclusions Prevention of the local authority citing paragraph 13 of the statutory Exclusions Guidance (2017): ‘It is unlawful to exclude for a non-disciplinary reason,’” the Christian legal advocate said.

“The section also states that ‘it would be unlawful to exclude a pupil’ for failing ‘to meet specific conditions before they are reinstated, such as to attend a reintegration meeting,’ which the school is insisting on in the case of the two children,” it continued.

In their letter to Papas, the parents accused the head teacher of having violated the school’s Equality Duty.

“You have acted in a manner contrary to the school’s Equality Duty; precisely the duty to eliminate discrimination based on religion or belief and to foster good relations among those with protected characteristics (para. 10 of the Guidance),” they wrote.

Asking that their children be excused from any further LGBT teaching or promotional activities, the parents cited England’s Human Rights Act 1996, which they believe directs schools to “have regard to the principle that pupils are to be educated according to (parents’) wishes.”

The parents also cited the UK’s Education Act in asserting their right to not to have LGBT propaganda imposed on them.

“I would further contend that the imposition on parents of divisive campaigning materials which run afoul of my family’s deeply held religious beliefs amounts to indoctrination both within the meaning of Protocol 1, Article 2 of the (European) Convention (of Human Rights) and Section 406-407 of the Education Act 1996, and is therefore wholly forbidden,” they wrote.