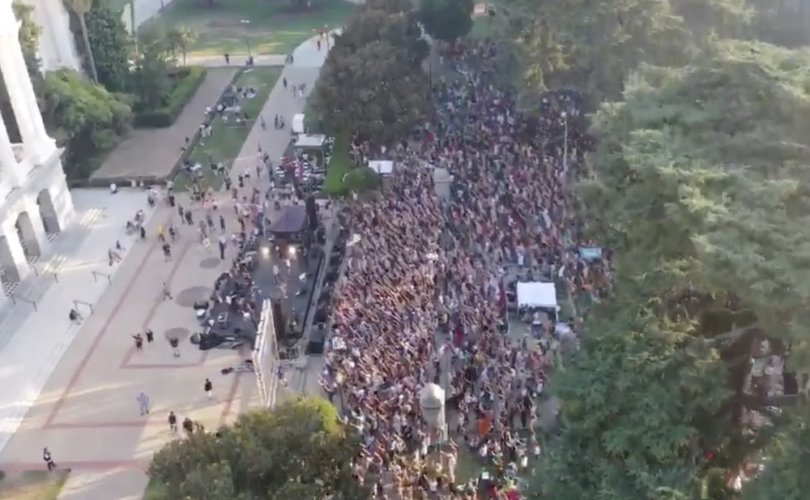 SACRAMENTO, California, September 10, 2020 (LifeSiteNews) – Tens of thousands of Californians descended on the state capitol on Sunday for an outdoor, in-person worship service that doubled as an act of defiance against the state’s efforts to restrict religious assembly.

Democrat Gov. Gavin Newsom has banned indoor religious services (along with various types of secular gatherings) in 29 counties representing 80 percent of the state’s population in the name of containing the spread of COVID-19. The latest response to his actions, the “Let Us Worship” rally, attracted more than 12,000 attendees for a day of prayer, music, and public speaking, the Daily Wire reported.

“The fervor to worship God free from government edict and societal persecution drove America’s earliest settlers across oceans and wild frontiers to this beautiful land to create a new nation built on a simple premise that all men are created equal and cannot be denied their inalienable rights to life and liberty,” the event’s organizers said in a statement. “But our freedom to worship God and obey His Word has come under unprecedented attack.”

“It’s time for the Church to rise up with one voice and tell our government leaders and the rulers of big tech that we refuse to be silenced,” they declared.

“We are gonna worship like we’ve never worshiped before, and I declare that after all of this is over tonight, the remnant, the residue of this worship will saturate this ground and seep into that building,” added Republican state Senate Minority Leader Shannon Grove, one of the event’s speakers. “And when it goes into that building, it will touch every heart that enters. God bless you, let us worship!”

After the event, Grove came under fire for attending and speaking without a mask despite being told she was supposed to quarantine until September 10 because she attended a lunch with Republican state Sen. Brian Jones, who tested positive on August 26.