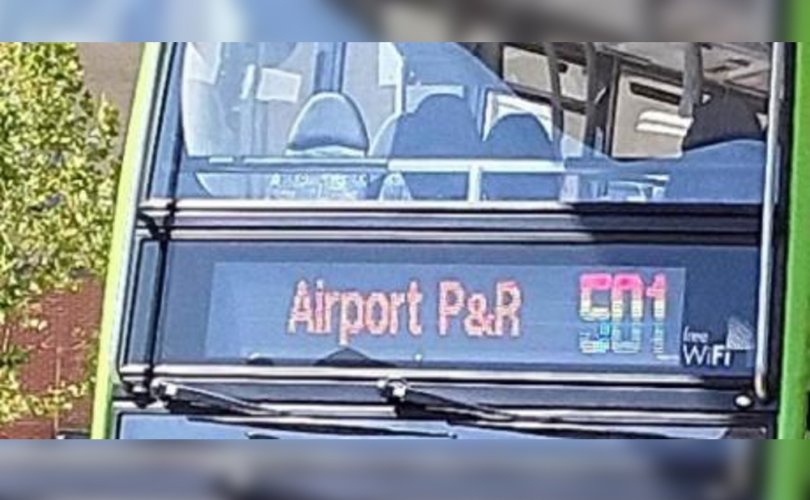 NORWICH, England, August 16, 2019 (LifeSiteNews) – Over 16,000 people have signed a petition insisting that an English bus driver’s employer stand by him after he refused to drive a bus promoting LGBT “pride flag” colors.

CitizenGo launched the petition on behalf of the Konectbus driver, suspended after a college student reported him last week for refusing to drive a bus that bore a number decked out in LGBT “pride flag” colors.

“So far, after in the 36 hours since being put online, over 16,000 people have signed our petition asking that the bus driver is reinstated,” CitizenGo spokeswoman Caroline Farrow told LifeSiteNews.

“It demonstrates two things,” she continued. “Firstly that the British public feels strongly that nobody ought to be forced by their employer to support and promote principles which go against their personal beliefs.”

She said the “overwhelming response” also shows that ordinary people are fed up with the ubiquitous rainbow flag and resent the way in which various corporations and public institutions are using the “political symbol” to coerce “the public into an uncritical acceptance of a very questionable ideology.”

The informer, Rebecca Sears, 19, was upset because the driver voiced his objections to the colorful, politicized digits.

“Today I was waiting for the 501 bus to Thickthorn and we were told by the driver we had to wait for him to swap buses as ‘this bus promotes homosexuality and I refuse to drive it’ due to the multicoloured ‘501’ sign,” she wrote on Twitter, posting a photograph of the driver.

“I’m aware everyone is entitled to their own views. However, if you can’t do your job properly because of your bigotry, maybe you need [to] rethink your choices.”

The driver, whose name is as yet unknown, is believed to be in his fifties.

Sears also disclosed on Twitter that she had reported the Konectbus driver to staff in the bus station, who assured her that they knew about the incident.

In response, Konectbus’s parent company assured the teenager that their employee had been suspended.

“Go East Anglia prides itself on values that support diversity and inclusion and has been a champion of Norwich Pride since 2017,” it stated on Wednesday.

“We particularly want all customers of whatever background or sexual orientation to feel comfortable on our services,” it continued.

“As a company we do not condone any behaviour from our drivers that does not support this view. The driver involved in this incident has been suspended and a full investigation is underway.”

LGBT “pride” events take place throughout the United Kingdom during the summer months, and not only buses but trains, banks, and other commercial enterprises prominently exhibit the signature LGBT rainbow colors.

CitizenGo deemed the LGBT loyalist “intolerant” and stated that it was the teenager’s tweet that got the driver suspended.

“… [N]ot satisfied with reporting the man to the front desk, [Sears] proceeded to take a photograph of him and escalated the situation on social media, resulting in his suspension from work. This could potentially lead to reprisals for him and his family,” the group wrote in its petition.

The group observed that the student hadn’t tweeted because her journey had been impeded or because she had suffered a short delay but because the driver expressed an opinion.

“The driver was not expressing any hatred or offensive remarks towards the LGBT community or any one individual but simply exercising his own conscience rights when it comes to being forced to promote a political ideology with which he disagrees,” the petition reads.

CitizenGo questioned the right of employers to force employees to promote political ideologies with which they disagree and underscored the fact that “pride” is a political movement.

“The rainbow flag is a political symbol, supporters of which promote a number of troubling ethical practices such as gender ideology and surrogacy,” it said.

“When a company chooses to adopt a political cause as part of their corporate branding employees are then automatically associated with that cause and often, as in the case of the bus driver, forced to promote it.”

“To force an employee to promote values which go against their conscience or religious faith is in breach of the European Convention on Human Rights.”

CitizenGo revealed that a colleague of the bus driver had “gloated” on social media that the driver is sure to be fired because his manager is gay.

“This implies that the man could be denied fair process and subject to a biased investigation.”

It also implies that the gloating colleague believes that LGBT people are necessarily vengeful and petty when it comes to freedom of speech.

Twitter-user Pàdair asked Jamie Wood: “Are you suggesting that the Network Manager will be biased in his approach to this because he is gay? I don't think he would be happy with that, do you?”

To sign the online petition on behalf of the driver, please go here.