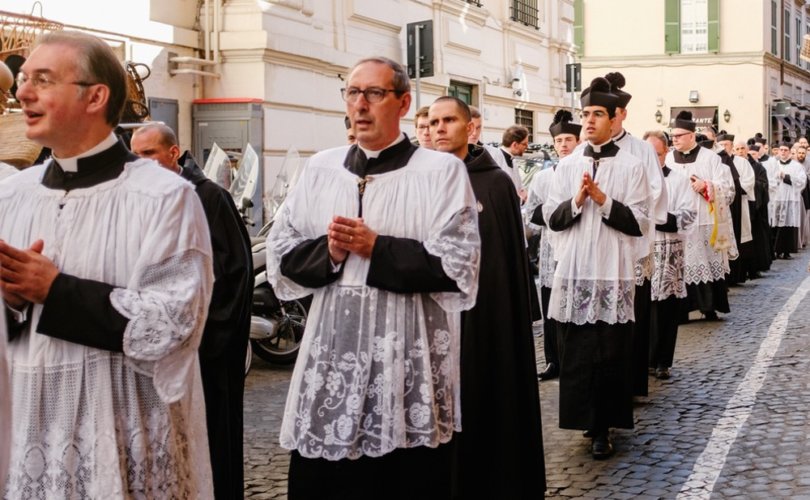 Priests wearing cassocks and surplices at the 2015 Summorum Pontificum pilgrimage in Romeshutterstock.com

PARIS, July 5, 2018 (LifeSiteNews) — Over 20 percent of the 114 men who will be ordained to the Catholic priesthood in France this year belong to traditionalist communities.

Overall, the number of ordinations has fallen in France. In 2017, the “Eldest Daughter of the Church” received 133 new priests, 19 more than this year. However, according to La Croix, the number of priests belonging to communities that celebrate the Mass of John XXIII strictly according to the rubrics or the Traditional Latin Mass has continued to increase.

La Croix did not mention the 2018 ordinations for the canonically irregular Society of Saint Pius X (SSPX) despite the recent thawing of the Vatican towards Archbishop LeFebvre’s traditionalist order. On June 29, Bishop Fellay ordained three Frenchmen to the priesthood in Econe, Switzerland.

Julienne Thurrott, organizer of a contingent of Scottish pilgrims, told LifeSiteNews that the health of the traditionalist Catholic movements in France can be gauged by the huge numbers that attend the annual Paris-to-Chartres Pilgrimage.

“It regularly attracts about 15,000 – the majority of whom are French,” she said. “The SSPX pilgrimage, which walks from Paris to Chartres at the same time, attracts about 5,000 pilgrims.”

Fewer than half of France’s dioceses will ordain new priests this year. Of its 99 dioceses, 58 will ordain no new priests at all. Paris and Bordeaux have the most ordinands: six each. Lyon, Versailles and Fréjus-Toulon – a tradition-friendly diocese – will have five each. Evry-Corbeil-Essons will have four.

The La Croix article stressed that the number of “late vocations,” the ordination of middle-aged men, is also rising, particularly for priests who will say the Novus Ordo (post-Vatican II Mass).

This suggests a shorter term of service.

In 2014, it was estimated that if traditional communities continued to ordain men at the current rate, and ordinations for the Ordinary Form of the Mass continued to decline at those levels, then in 2038, more than half the Catholic priests in France would be traditionalists.

Although this may seem like good news for those who love the Extraordinary Form of the Mass, it actually represents a collapse of the Catholic Church in France. If the predictions are accurate, the year traditionalists become half of all French priests, there will be only 500 priests in total in France.