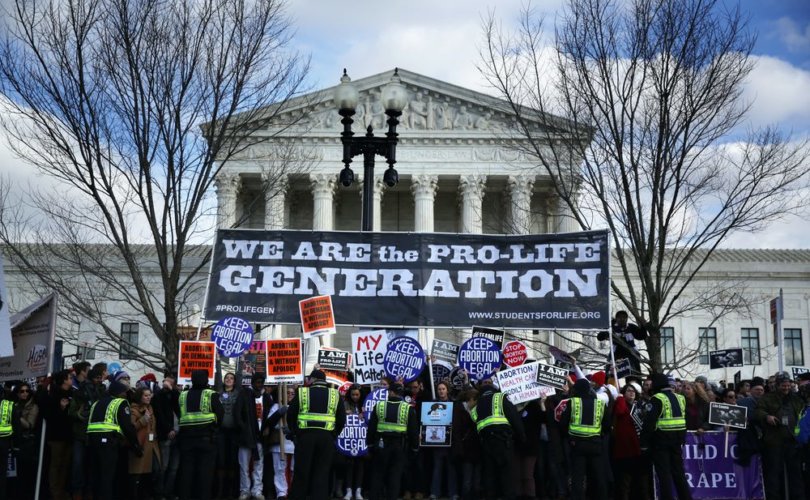 WASHINGTON, D.C., January 3, 2020 (LifeSiteNews) ― Over 200 Republican lawmakers and two Democrats signed an amicus brief to the U.S. Supreme Court in support of the Louisiana pro-life law it is considering, stating that legal battles over abortion “rights” show the “unworkability” of that term as defined in Roe v. Wade.

Roe v. Wade and its sister decision, Doe v. Bolton, imposed abortion on demand across the U.S. in 1973.

“[We] respectfully suggest that the court’s struggle—similar to dozens of other courts’ herculean struggles in this area—illustrates the unworkability of the ‘right to abortion’ found in Roe and the need for the Court to take up the issue of whether Roe and [Planned Parenthood v.] Casey should be reconsidered and, if appropriate, overruled,” the 39 senators and 168 representatives professed. (Link to full brief here.)

The amicus brief was filed by Americans United for Life in support of the case Gee v. June Medical Services, LLC, which is being heard by the U.S. Supreme Court. Both pro-life and pro-abortion activists believe that the case may lead to a weakening or even overturning of Roe v. Wade.

June Medical Services is an abortion facility in Shreveport, Louisiana. The abortion business seeks to overturn the provisions of Louisiana’s Unsafe Abortion Protection Act which require abortuaries to have the same safety standards as other outpatient surgical centers. These include the criterion that abortionists must have admitting privileges at one of their local hospitals.

The amicus brief argues that the Unsafe Abortion Protection Act is constitutional. It also states that Louisiana’s abortion facilities, including June Medical Services, “have a long history of serious health and safety violations.”

“In fact, the Fifth Circuit found the history of health and safety code violations at June Medical and Delta Clinic as well as ‘generally unsafe conditions and protection of rapists’ to be ‘horrifying,’” the brief remarked.

“I’m proud to lead the fight in Congress defending Louisiana’s pro-life law that will soon come before the U.S. Supreme Court,” Scalise said.

“Innocent life must be protected at every stage, and I urge the Supreme Court to uphold this law which ensures the health and safety regulations meant to protect Louisianans from the very abortionists who don't want high standards.”

Senator Kennedy emphasized that the case will determine whether or not abortion businesses have to follow the same safety standards protecting women at other surgical centers.

“When our Supreme Court justices take up this Louisiana case, they will be deciding whether abortion clinics should be required to maintain the same standards as any other outpatient surgical clinic,” Kennedy said.

“The health and lives of these women are at stake,” he continued.

“We aren’t asking abortion clinics to close down; we’re demanding they protect their patients by securing admitting privileges at nearby hospitals. It’s a common sense law, and we need to uphold this law which helps protect the lives of women and their unborn children.”

Congressman Mike Johnson hinted at the far-reaching impact of this case, particularly regarding states’ rights.

“This case is vitally important for two reasons,” Johnson stated.

“It presents a key opportunity for the Supreme Court to affirm the right of states to enact common sense health and safety regulations to protect women in vulnerable situations,” he explained.

“The Court can also affirm Louisiana's challenge to third-party standing, and ensure that future court challenges to abortion-related regulations cannot be brought by the notorious abortion industry that profits off substandard practices and dangerous clinic conditions.”

“In a year where the abortion movement has swept state legislatures to the extreme in states like New York and Virginia, it is important we defend the right of states like Louisiana to pass legislation to do the opposite and do more to protect the life of the unborn,” added Senator Blackburn.

An opposing brief was also filed. It was signed by 197 congressmen, mostly Democrats, including Speaker of the House Nancy Pelosi of California.

Republican Sen. Josh Hawley of Missouri filed his own pro-life brief in June.

Abortion proponents are distressed by the predominantly Republican amicus brief’s attack on the “unworkability” of the Roe v. Wade abortion “rights” definition.

“Asking the Supreme Court to reconsider overturning Roe is an assault on our basic rights, plain and simple.”

“A woman's access to abortion isn't a privilege. It's a fundamental right—and the law of the land,” he tweeted.

“That's why I've supported reproductive health as a mayor & as a philanthropist. As president, I will appoint judges who would preserve Roe, not take it away.”

2020 contender and Massachusetts Sen. Elizabeth Warren said the brief demonstrated that “[we] need to take back the Senate and pass federal laws protecting our reproductive rights.”