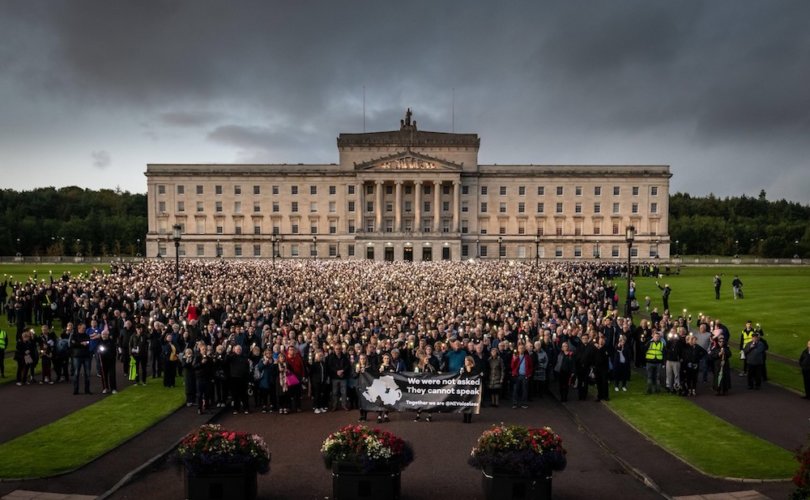 BELFAST, September 9, 2019 (LifeSiteNews) – As many as 20,000 pro-lifers descended on Belfast this weekend for the March for Their Lives, an event registering the public’s anger that the parliament of the United Kingdom has imposed legal abortion upon Northern Ireland.

In July, Parliament voted 328-65 to repeal Sections 58 and 59 of Northern Ireland’s 1861 Offences Against the Person Act, which forbid both women and doctors from committing abortions. Pro-lifers in and out of the province were outraged that the UK imposed their will on the people of Northern Ireland.

On Saturday, concerned pro-lifers responded by marching to the Stormont parliament buildings where the Northern Irish assembly is located, The Independent reports. There, they bowed their heads in six minutes of silent witness. The event was organized by the pro-life groups Precious Life, the Life Institute, and Youth for Life NI, according to CatholicIreland.net. The organizers say they saw a turnout of more than 20,000 marchers.

Enormous crowd gathering at Parliament Buildings for a silent demonstration against a planned liberalisation of Northern Ireland’s abortion laws pic.twitter.com/Jq8HmweXHh

Here is s drone shot of the 20,000 people (based on algorithms of the photos) who gathered at #Stormont to protest against abortion – great job ⁦@NIvoiceless⁩ ⁦@BothLivesMatter⁩ ⁦@careforni⁩ ⁦@EANInews⁩ ⁦@EAUKnews⁩ and everyone else involved. pic.twitter.com/ixGoYiEO9f

“We organised this event which was open to people of all religions, all political persuasions and all cultural backgrounds so we could come together and unite on this issue, and stand in silent protest,” pro-life march organizer Sarah Crutchley said. “We want our silence to say two things: that first, we, as the people of Northern Ireland, were not asked about this change in legislation, and that it actually goes against public opinion here, and that every sitting MP from Northern Ireland voted against this change, and that the unborn children, they have no voice, they cannot speak so they were not considered in this legislation.”

Further complicating the issue is the fact that Northern Ireland’s assembly has been suspended for more than two years and has been unable to reach an agreement on reconvening. The UK Parliament has set a deadline for the province’s assembly to come together by October, otherwise it will begin legalizing abortion.

“We can see children suffering, not able to get to school. Hospitals not functioning, we can see so much that is wrong” without a functioning provincial government, O’Loan said. “And to compound all that's wrong, to bring in abortion, unregulated abortion, up to 28 weeks. Just like that. And then to move to march, to pass a set of regulations, which cannot be debated and amended. That is wrong.”

Faithwire’s Will Maule notes that Northern Ireland saw just 13 abortions from 2016 to 2017, whereas England and Wales saw an estimated 200,000.