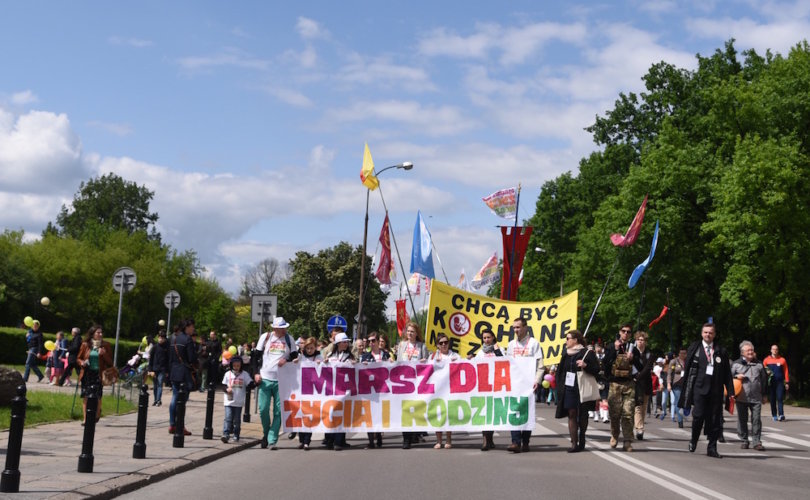 WARSAW, Poland, May 17, 2016 (LifeSiteNews) – Pro-life advocates held over 140 marches across Poland on Sunday, with participants totalling somewhere between 200,000-300,000 despite bad weather in some cities.

The Center for the Support of Family and Life Initiatives has coordinated the events since 2006 on May 15, a pro-life feast in Poland. A local committee with representatives from social and church organizations organizes each march. Some marches took place before May 15, and others will happen in June.

The march’s theme was “Every life is priceless,” a reminder of the value of every life, most specifically that of the unborn.  “Everybody, regardless of his or her physical, spiritual or financial state, is invaluable, and nobody can deprive him of the fundamental right to life,” said the Center’s Paweł Kwaśniak. He explained that Polish abortion law allows the killing of 1,500 unborn children a year, in most cases for eugenic reasons.

During the marches, signatures for the abortion ban were gathered. These are needed for the Parliament to vote on the citizens’ bill. “This year there is a chance like no other to completely protect all human life by law,” Kwaśniak said. He emphasized that current abortion legislation, which allows for abortions in some cases, is a remnant of the 60-year old law introduced in Poland by the Communists.

Renowned doctor Bogdan Chazan, who lost his job as a hospital director for his pro-life views, expressed the same hope for the change of law. He lead the march in Rzeszów in eastern Poland, where he had begun his career as a young doctor. “We are talking not only about the abortion ban, but about the full and complete defense of life,” Chazan said, adding that the proposed ban was created neither by the Church nor the government, but by concerned Polish citizens.

The government has taken notice of the actions of pro-life citizens. While speaking on the occasion of the United Nations-declared International Day of Families, also held on May 15 every year, President Andrzej Duda acknowledged the citizens’ bill as well as the massive marches. In a televised message put on his official website, he and his wife, Agata Kornhauser-Duda, spoke about the importance of families that teach about life, love, patience, responsibility and respect toward the elderly. They also expressed great respect for families who take care of them as well as special needs children.

Prime Minister Beata Szydło sent a letter to the participants in a pro-life march in Oświęcim in which she acknowledged the strengthening of the family as one of the most important goals of her policy.

In Oświęcim, the march was linked with the celebration of the Baptism of Poland of 966 and a contest for the best historical outfit there. The same historical theme was present in Płock, where a pair dressed as Mieszko I, the first ruler of Poland, and his wife, Dobrawa of Bohemia, led the march. In the small town of Głogów, the participants, mostly children, also wore historical outfits. Rev. Janusz Idzik said that the march was a gift for John Paul II, who was born May 18. “We are used to talking about him, but now is the time to carry out his message,” he said, invoking John Paul II’s teaching about the protection of life from the moment of conception.

Sławomir Olejniczak from the conservative group Piotr Skarga Society for Christian Culture echoed this idea. “Poland can proudly wave the banner for the protection of life…and for a return to our Christian roots, the foundation of our civilization,” he said in an interview for the magazine Polonia Christiana. “It is a great challenge, especially this year when we celebrate both the 1050th anniversary of foundation of Polish state and the beginning of Christianity. This double anniversary shows how important Christianity has been for Poland. It has been critical for the foundation of its society, the existence of the state, and development of civilization,” Olejniczak added. “And that’s how it is supposed to be. We can show Europe the right direction.”

Archbishops, bishops and local clergy were very active in the events. Many marches were preceded by a mass. In Koszalin, while celebrating the Feast of Pentecost on Sunday, May 15, Bishop Edward Dajczak said that, “The descent of the Holy Spirit represents a fire that not only burns out our evil and weakness, but also brings us divine gifts.”

Politicians did not avoid the events. In Ełk, Mayor Tomasz Andrukiewicz was among the participants. In Warsaw, MPs Piotr Uściński, Robert Winnicki, and Anna Siarkowska came to celebrate life and family.

Before the marches took place, the organizers prepared an advertising spot using the poem “Children” by Saint John Paul II. They paid for thousand of posters, hundreds of thousand of leaflets, and videos and ads in local radio stations. Many famous people invited Poles to take part in it. Among them were Professor Bogdan Chazan, and conservative journalist Tomasz Terlikowski, one of 108 signatories of the Open Letter of Journalists Against Abortion To Members of Parliament. Famous actors Ewa Ziętek, Marcin Kwaśny, Małgorzata Buczkowska-Szlenkier and Ksawery Szlenkier also did not shy away from the pro-family, pro-life messages. Ultimately, the biggest TV and radio stations covered the events. Private station Polsat reminded viewers that before the election the ruling party Law and Justice (PiS) had promised to protect the unborn.

“We would like to send a clear and simple signal from Poland to other countries that there is a shift towards pro-life, and that this change is possible,” Kwaśniak told pch24.

Many attractions for the children and adults were organized at the end of the marches, such as picnics and family festivals, concerts, as well as sports, photography and culinary competitions with prizes. There was a honey harvest in Nowa Sól, and special cake for the participants in Inowrocław and Toruń. In Szczytno, there was horseback riding, and in Łódz, money was raised for charity. This year, the Stanisława Leszczyńska Single Mother Home was the recipient. The home is named for Stanisława Leszczyńska, a principled and uncompromising midwife who risked her life opposing abortion and defending women and their unborn children in Auschwitz.

Kwaśniak commented that, “The organizers wanted to show that Poles are not indifferent toward very aggressive radical feminists demands.” He seemed to have in mind a widely-promoted but sparsely supported demonstration in which a few Polish feminists left church while priests read a bishops’ letter in support of the abortion ban. “Their slogans attract a handful of radical activists in big cities, but the pro-life message resonates in every corner of the country,” Kwaśniak concluded.