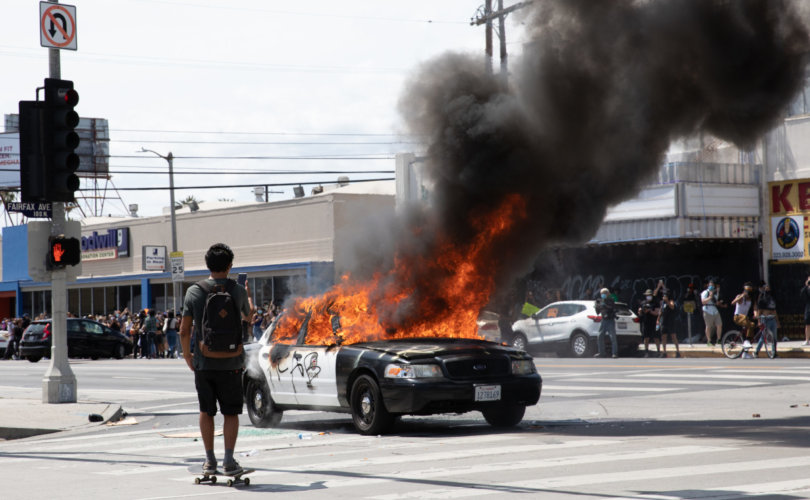 WASHINGTON, D.C., September 25, 2020 (LifeSiteNews) – More than 300 rioters in 29 states and Washington, D.C. have been charged for committing crimes “under the guise of peaceful demonstrations” since late May, the U.S. Department of Justice (DOJ) announced Thursday.

“Violent opportunists have exploited these demonstrations in various ways,” the DOJ said in a press release regarding the charges.

The DOJ stated that as of Thursday, of the 94 U.S. Attorneys’ Offices, more than 40 have filed “federal charges alleging crimes.”The charges incurred by rioters are vast and include attempted murder, assaulting a law enforcement officer, burglary of a federally-licensed firearms dealer, arson, damaging federal property, malicious destruction of property using fire or explosives, felon in possession of a firearm and ammunition, unlawful possession of a destructive device, inciting a riot, and felony civil disorder, along with others.

The DOJ said that many federal, state, and local law enforcement agencies across the nation, including the Bureau of Alcohol, Tobacco, Firearms, and Explosives (ATF), the FBI, and various U.S. Attorney’s offices, have investigated the cases.

The charges stem from violent protests mostly aligned with the group Black Lives Matter (BLM) that have rocked the United States in various cities since late May after a Minnesota man, George Floyd, was killed by a white police officer.

The DOJ said that around 30 people have been charged with “offenses related to civil disorder,” 80 regarding arson and explosive related offenses, 35 with charges of assaulting a law enforcement officer, and others for “burglary and carjacking.”

Many of the crimes committed by rioters are related to damage to private businesses and both private and public property.

In July, President Donald Trump called the protesters “sick and deranged Anarchists & Agitators.” Trump then said that law enforcement could easily control the protestors, but they “would destroy our American cities, and worse, if Sleepy Joe Biden, the puppet of the Left, ever won.”

The DOJ gave an example of one crime that took place outside the Supreme Court in Washington, D.C. involving a man who “suffered severe burns” after being “engulfed in flames” when he “poured a liquid from a gas can on to three U.S. Supreme Court Police vehicles.”

On Monday, the DOJ called out the Democrat-run cities of New York, Portland, and Seattle for allowing anarchy to reign, having permitted “violence and destruction of property to persist and have refused to undertake reasonable measures to counteract criminal activities.”

In early September, Trump issued a memorandum that asked the DOJ to review “Funding to State and Local Government Recipients That Are Permitting Anarchy, Violence, and Destruction in American Cities.”

The ATF is urging people to report suspected arson or explosive crimes committed that are “associated with the recent unrest.”

Additionally, the FBI is asking that if you know a person “who may have incited or promoted violence of any kind” to call the tip line at 1-800-CALL-FBI (800-225-5324) or submit images or videos at FBI.gov/violence.