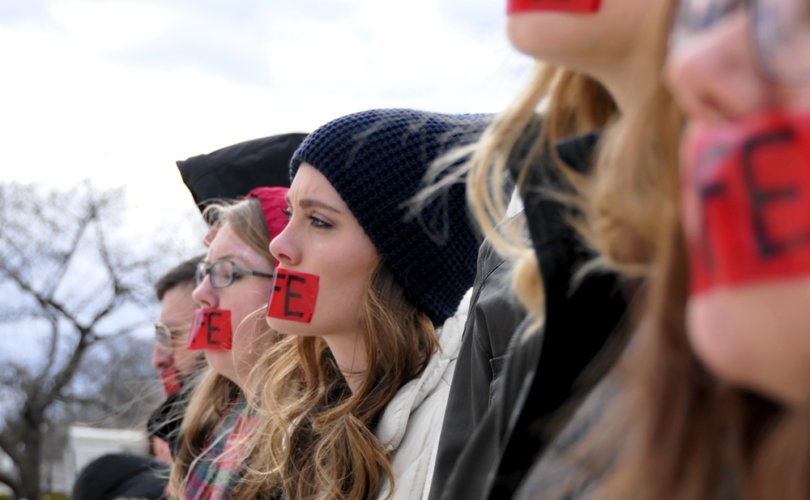 April 11, 2018 (LifeSiteNews) – Across the United States, pro-life high school and college students from more than 250 schools and more than 350 student groups walked out of class to protest abortion.

At 10:00 a.m. for each school’s local time on Wednesday, students left class to gather for seventeen minutes of silent witness for the ten children aborted by Planned Parenthood in that time period, and the more than 60 million babies killed since Roe v. Wade legalized abortion in 1973.

The National Pro-Life Walkout was devised by Rocklin High School student Brandon Gillespie of California, with organizational support provided by Students for Life of America (SFLA). Gillespie wanted the event to “honor all the lives of the millions of aborted babies every year.”

Students for Life covered the walkout with live video at several schools, including Rocklin, Moriarty High School in New Mexico, Los Alamitos High School in California, and Frederick East Classical High School in Maryland. SFLA reports enthusiastic crowds brandishing a variety of signs, as well as honks of support from passing cars. Several members of the Rocklin community turned out to support Brandon Gillespie, as well.

“We want to make students aware that this is an issue for their generation,” a Frederick East administrator identified as Kim told SFLA’s Michele Hendrickson, “because a lot of their classmates may not even be here because of the abortion movement.”

“So proud of the more than 60 students who participated in the #ProLifeWalkout from my high school,” Gulf Breeze High School student Blake Barclay of Florida tweeted, sharing pictures of the gathering. Students in Tennessee tweeted their participation, as well, with updates continuing throughout the day using the hashtag #ProLifeWalkout.

Students for Life of America president Kristan Hawkins shared a photo of a display at Los Alamitos High School, featuring 1,700 baby socks laid out to represent the estimated 1,700 babies lost to abortion daily.

So honored to join students at Los Alamitos High School in LA today for the #ProLifeWalkout. Look at this awesome display they also set up to remember the 1700 that will be lost today because of #abortion! #defundPP #abolishabortion pic.twitter.com/DRvzLK18mJ

So proud of the more than 60 students who participated in the #ProLifeWalkout from my high school. We are the #ProLifeGeneration. @Students4LifeHQ pic.twitter.com/qgmN88lFlh

Gillespie also hoped the event would highlight the double-standards of school administrators who were far more receptive to a gun control walkout the month before. His history teacher, Julianne Benzel, was suspended for two days after she questioned in class whether schools that accommodated the gun event would similarly accommodate pro-life students.

Gillespie says the school confirmed his suspicions by waiting until the last minute to respond and denying him several accommodations it had made for the gun walkout, including flexible lesson plans and the use of school sound equipment. A district spokesperson claimed the anti-gun event was “viewpoint neutral” and the pro-life event was not, despite the fact that the former’s organizers supported and opposed specific pieces of legislation.

Other schools displayed a similar double standard. Students for Life published comments from several unidentified students reporting their administrators’ decisions. “I could hold it among my friends if we talked to the office first,” one said, but “I am unable to put up posters around the school to raise awareness.” Another said his principal, who asked that his decision not “go to the media,” suggested that students gather at 8:30 a.m. instead, so as not to “disrupt instruction.”

Others report that their administrators expressly forbade walking out and/or dispensing information, despite approving the gun walkout, claiming the subject was too divisive. “My principal said that abortion is too political,” one student said, whereas “everyone agreed about the gun walkout.”

Campus Reform reports that most Ivy League institutions and more than 100 other colleges announced that students would not be penalized for participating in the gun walkout. But while most schools gave pro-lifers similar guarantees when asked, they did not proactively release statements on the subject.