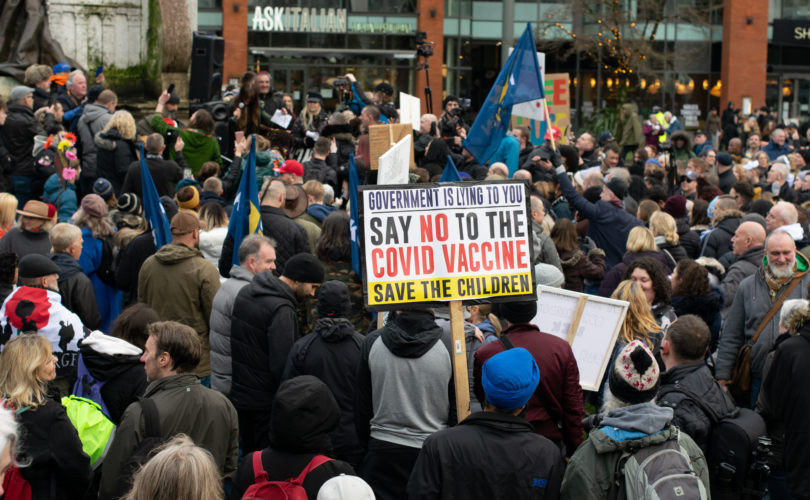 May 12, 2021 (LifeSiteNews) – On Saturday, May 15, people in more than 40 countries will participate in the second World-Wide Demonstration protesting the unprecedented COVID-19 restrictions that have severely curtailed basic human rights, calling for an end to “ubiquitous public incarceration.”

Since the spring of 2020, severe measures have been in place in most countries as part of an advertised bid to prevent the spread of COVID-19 infections. More than a year after the onset of these restrictions – which were typically introduced as “temporary” – the number of people opposing them has grown substantially.

The May 15 event is organized by World-Wide Demonstration, which started as an action group in Germany in the spring of 2020. On the one-year anniversary of the start of the restrictions, the group staged the first global protest on March 20. Cities across the world saw protestors march against lockdowns, mask mandates, and mandatory vaccines.

Buoyed by that success, the second event looks to build on the popular support in a march for “Freedom, Peace, and Human Rights.”
In a recently released press release, the group highlighted five “important freedoms” that will be the subject of the upcoming protests: “freedom of speech, freedom of movement, freedom of choice, freedom of assembly, freedom of health.”

The group stated that “excessive coronavirus restrictions must come to an end, and all state of emergency declarations enabling these measures must be repealed.”

Furthermore, it called for an end to the “tyrannical suppression of dissenting voices,” as well as the police response to such opposition, which was described as being “violently crushed” by police and law enforcement.

Clearly stating its firm and vocal opposition to measures such as mask mandates, mandatory vaccines, vaccine passports, and movement licenses, the group noted how its supporters would not tolerate such measures being imposed. “We cannot allow our Human Rights to be re–packaged as Human Privileges, to be conditioned upon compliance with Authoritarianism.”

The group pointed to an “International Freedom Movement” that is “building alternatives to established power structures, and ways of living.” Mentioning an exodus of people from populated cities, and societal resistance to the COVID restrictions in all walks of life, World-Wide Demonstration proclaimed that “society is pushing back against pervasive and restrictive socially enforced norms.”

“The Light of Freedom cannot be extinguished. Throughout history, humanity has been tried and tested in difficult times, but in the end, Freedom Always Wins. We call on all opponents of the coronavirus restriction policies of their own government to participate in this World-Wide Protest.”

Germany’s domestic intelligence agency recently created a new section specifically for surveillance of a small number of people and groups protesting coronavirus restrictions. Meanwhile, the United States Postal Inspection Service, a law enforcement arm of the USPS that most Americans don’t know exists, was revealed to be spying on Americans’ social media.

“And two, if Big Brother mailman is looking for criminal activity, that would normally be the FBI’s job, and yet according to a memo obtained by Yahoo News, the U.S. Postal Inspection Service is running what it calls the Internet Covert Operations Program, or ICOP. And the primary objective appears to be collecting data about planned protests, in the document obtained by Yahoo.”

Gallagher continued, “In the document obtained by Yahoo, Big Brother Mailman was looking for inflammatory posts about the worldwide Rally for Freedom held back in March. That's where thousands of people around the world protested COVID lockdowns. But instead of looking for potential nefarious behavior across the board, the main surveillance was of Facebook and ‘right-wing leaning Parler and Telegram.’”

‘We choose to live free’

The May 15 protest is being held in multiple locations that include Australia, Argentina, Brazil, Canada, France, Germany, India, Sweden, Spain, the U.K., and the United States.

Details of the event, with locations and times, are being shared on the social media site Telegram. World-Wide Demonstration’s official page can be found here, in which details of all the events are listed as they are announced, along with a list of the various countries, cities, and group chats giving specific details.

“The corrupt and contemptuous actions of governments and non-government organizations during the coronavirus pandemic is an international problem that calls for an international response,” read the statement.
“We choose to live free.”

Below is a provisional list of the locations and some Telegram groups for protests:

Bosnia and Herzegovina, Sarajevo – x (No Telegram group made)

Serbia, in all cities – t.me/worldwideserbia