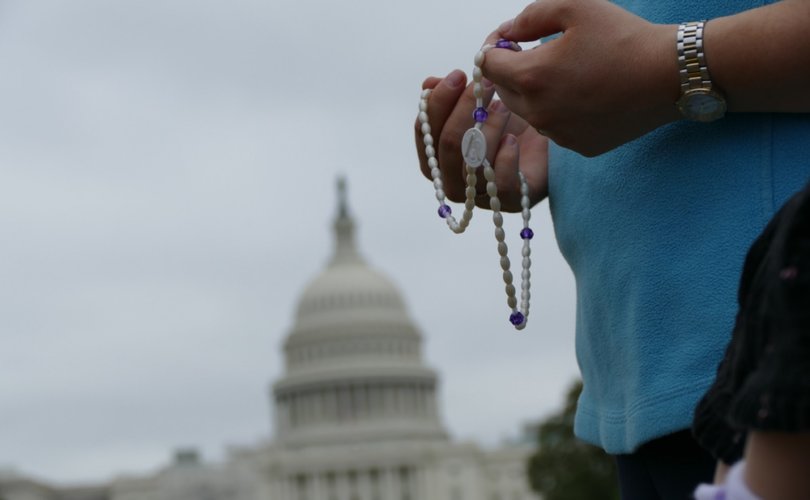 PINE BLUFF, Wisconsin, October 4, 2018 (LifeSiteNews) — Catholics in more than 40 countries across the world will unite this Sunday to fight the forces of evil prowling the earth and the Church by praying the rosary.

An effort that began as a U.S. response to Poland’s flourishing Rosary at the Borders last fall has gone global with rosary rallies planned worldwide in what organizers are calling a “clarion call of the Immaculata.”

The term Immaculata derives from the word immaculate, which in Catholic theology means free from sin, also denoting the Virgin Mary and the Immaculate Conception.

“This is a worldwide effort to combat the powers of darkness,” the Rosary Coast to Coast website states.

Citing the myriad social ills that have befallen the culture in the U.S. and the world – including sexual hedonism, abortion, divorce, pornography and drug use – the rosary effort recalls Our Lady’s appearances throughout history, where she predicted the societal decay and called for Catholics to pray in reparation.

Casualties often go unseen in this war with no borders, the initiative’s information also says, but very few are left unwounded.

“The enemies encamped against us seek to rob us of our dignity – the essential dignity of the human person, being made in the image and likeness of God,” it states.

“What was once done in darkness is now celebrated in the light,” the rosary organizers continue. “Yet, where before we may have been blinded, God’s unfathomable mercy is opening the hearts, the minds and the eyes of people of Faith. Our Lady’s Clarion Call – the call once trumpeted at Quito, LaSalette, Fatima, Tre Fontane and Akita — is upon us.”

Several U.S. cardinals and bishops have endorsed the Rosary Coast the Coast. Hundreds of U.S. sites have registered participation in the rosary rally. The initiative operates under the Mantle of Our Lady of Guadalupe, and its patrons are St. Michael the Archangel, St. Maximilian Kolbe and St. Padre Pio.

Catholics across the world have initiated several rosary rallies after Poland’s successful rosary crusade last October 7, with more than a million Polish Catholics encircling their country with prayer.

“We, in the United States, share the conviction, now seen and acted upon in the international community, to enter fully into the spiritual warfare we are facing and to pray for our respective nations at this watershed moment in history,” the Rosary Coast to Coast site states.

Since July, Catholics in more than 40 nations, including churches in the Americas, Europe, Africa, Middle East and Asia, have united with the U.S. Rosary Coast to Coast initiative to pray the rosary for their respective countries.

The effort was done under the banner of the New Holy League of Nations.

Pope St. Pius V founded the original Holy League in response to the grim state of Christian Europe in 1571. It consisted of small groups of Catholic men and armies from various Catholic European nations.

Under the spiritual leadership of Pius V and the military leadership of Don John of Austria, through praying the rosary and fasting the Holy League implored the Lord’s grace and assistance through the intercession of the Blessed Mother. By God’s grace, on October 7, 1571, at the Battle of Lepanto, the Christian fleet won a huge victory, saving both Christendom and western civilization.

The Battle of Lepanto and the Holy League endure hundreds of years later as effective reminders of the power of praying the rosary and Catholics uniting in prayer for Our Lady’s intercession.

The New Holy League of Nations is sponsoring the 54-day novena and Rosary Coast to Coast, it said, because the Church finds itself in a similar situation to that of the Church in the late 16th century.

“However, instead of a physical enemy on the horizon,” it states, “the Church and the family (the domestic Church) are threatened daily by relativism, secularism, impurity, and confusion regarding Church teaching.”

International organizers of Sunday’s rosary rally encourage participants to live-stream their respective rosary gatherings through Facebook Live, or through the Periscope App, with the hashtag #RosaryCoastToCoast and #HolyLeagueOfNations.

Photos and video may be similarly tagged on all social media sites as well.

Organizers note that Pope Francis recently exhorted the faithful to pray the rosary throughout October, along with the St. Michael the Archangel prayer, “to protect the Church from the devil.”

“Answering this papal exhortation,” they say, “coordinators in Italy have announced that a Rosary Rally will be held, in St Peter’s Square, October 7. Organizers are asking those who wish to join to meet at the obelisk in the middle of the square at 3 p.m. to unite in prayer with the world.”