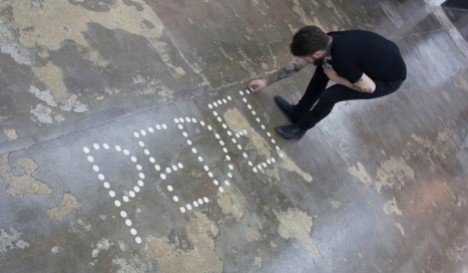 Azcona desecrates the Eucharist by spelling out the word 'pederasty' with consecrated hosts.

PAMPLONA, Spain, December 9, 2015 (LifeSiteNews) – Over 4,000 people attended two reparation masses in the cities of Pamplona and Tudela in Spain, on November 25, after Archbishop Francisco Perez called faithful Catholics to atone for a blasphemous art exhibit being shown at a local government venue.

“We consecrated 4000 hosts and they were not enough,” said the prelate, apologizing to those who weren’t able to receive Communion during the mass in Pamplona, reported local media.

During his homily, Archbishop Perez noted that “true freedom of expression does not encompass a supposed right to offend or show disdain for that which is most sacred.”

“Please let us defend the right to life, to marriage and family,” he urged. “To educate children and the youth, to serve for the common wellbeing, for the weak and those in need, a true work culture and the peace between nations.”

Some media outlets report the archbishop gave thanks “for the nearly hundred-thousand testimonies” from all over the world, “who adhere themselves to this celebration and pray that that which is most sacred to Christians and Catholics, which is the Eucharist, be respected.”

“The Church wishes to be a messenger of the civilization of truth, justice, peace and love, a civilization which only God can offer,” he concluded.

Local testimonies gathered by LifeSiteNews report over a hundred priests from different parishes concelebrated the mass held in the Pamplona Cathedral.

A simultaneous mass was celebrated in the Cathedral of Tudela at 7:00pm local time.

“The bishop has spoken about charity and mercy,” related one of the attendants. “He has asked that young people who feel called by God in their hearts, open their lives to Christ, to give themselves to Him. After the homily he asked to remain silent for a few moments. He was visibly hurt.”

Another spoke of the “atmosphere” in the Cathedral: “Prayer, repentance, forgiveness, silence, affection. Some people were crying and others could not finish singing as their voices would break. I had goose bumps. Priests, nuns, children, students, monks, fathers and mothers…”

According to some testimonies, some people waited over 20 minutes in line to receive Communion and some others were unable to as the 4000 consecrated hosts were not enough for all. “People were kneeling down to receive Communion even if we didn’t fit very well. It was impressive, the faith and pain people felt because Jesus was so gravely offended.”

The reparation masses come after local performance artist Abel Azcona stole 242 Communion hosts from different Catholic churches and used them to write the word “pederasty” on the floor as part of his show. The consecrated hosts have been withdrawn from the exhibition but pictures of what the artist did remain there for the public to see.