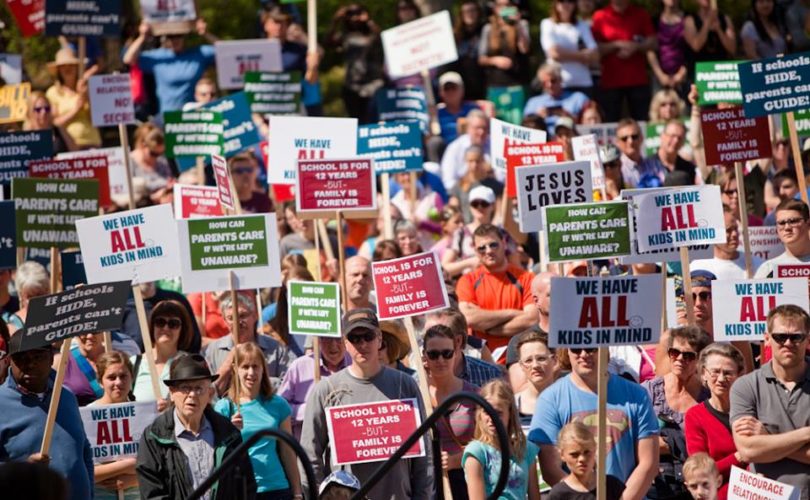 EDMONTON, Alberta, May 16, 2016 (LifeSiteNews) – More than 4,300 Alberta parents rallied in Edmonton and Calgary on Saturday against New Democratic government policies mandating school teachers and bureaucrats to keep parents in the dark about their children’s struggles with sexuality and gender.

Two culturally and ethnically diverse crowds blending born-and-bred Albertans and immigrants from the Middle East, Asia, and Africa marched through Calgary to City Hall and assembled in front of the provincial legislature in Edmonton. Each was over 2,000 strong and equally opposed to the NDP government’s “gender guidelines” mandating schools to encourage gender dysphoric students in changing their gender identities without informing parents.

“The media keep reporting this is about transgender washrooms,” Donna Trimble, the executive director of Parents for Choice in Education and organizer of the Calgary rally told LifeSiteNews. “But that is totally wrong.” For PCE and other parental organizations the issue is Bill 10 and the government’s “gender guidelines.”

The first forces every public, Catholic, and private school to set up gay-straight alliance clubs while the second empowers teachers to keep it from parents when students disclose same-sex attraction or gender dysphoria and to encourage the students to pursue their inclinations.

“These guidelines actually tell teachers they can keep this secret not only from parents but from social workers,” Trimble said. “There will be no second set of eyes on the issue, just the teacher’s or school counsellor’s. But we believe the parents are the best equipped to understand their children and who love them and care about them as none else does.”

She told her Calgary audience, “Parent choice is a mirage if the school setting itself is transformed by the government, from afar, into a one-size-fits all environment. This is what is happening today here in Alberta. Parents may think they have choice, but if the present trend of government coercion in schools is not halted, regardless of the type of school may have there will no longer be any genuine difference.”

Calgarians also heard from Chinese immigrant Stephen Zhang, who described himself as a “proud father of two” who had escaped a totalitarian regime to live in a free country where it was accepted that parents “should decide what is good or bad for our kids, not the state.”

“But if we do not defend the choices we enjoy, the freedom you are used to will be no more,” he said.

And Rahel Manaye, an Ethopian who led hundreds of East Africans to the event, told the crowd that her fellow countrymen had come to expect the public schools to encourage their children “to exercise their culture and their beliefs in the schools. But now “Bill 10 strips that from them.” Schools get their best results, she argued, “by including parents not excluding them.”

Another parent, Sheldon Johnson of the organization Children with Disabilities, said that trust between parents and teachers was especially crucial in the education of children with disabilities, who could not express themselves well, and whose impaired communications about sexuality or gender could be misinterpreted by over-zealous teachers or assistants. Bill 10 and the guidelines, said Johnson, “could place these children at risk” in order to serve “a small minority” of transgender students.

The emcee at the Edmonton rally, Theresa Ng, a public school teacher-turned-stay-home mother, quoted from a government document showing the government’s policy was rooted in a belief that transgender students need protection from parents.

Watch video of Donna Trimble speaking at the Calgary rally:

Circulated to MLAs of all parties, it states in part, “that not all students are supported in their homes when it comes to their expressed gender identity. A 2015 Canadian Trans Youth Health Survey found that 70 per cent of respondents felt their family didn’t understand them and one in three did not have an adult they could discuss their problems with. Nearly two-thirds of those surveyed reported self-harm in the past year and more than one-in-three said they had attempted suicide.”

Ng agreed there was bullying in schools for a variety of reasons. “But we should not be removing parental rights due to emotional rhetoric. The fact remains that teachers in a free society answer to the parents.”

She added that the government’s research also called for schools to help strengthen the transgender student’s bonds with his or her family. The same report states, “When youth had high levels of parent support and family connectedness, they reported much better health.” How could schools do that while cutting parents out of the loop on crucial gender issues, she asked.

Ng also reported getting feedback from fellow teachers indicating they were already swamped with extra-curricular responsibilities without becoming their pupil’s confidantes when facing life-changing choices.

Both leaders lamented the complete absence of MLAs at the two rallies. “They are too concerned about being politically correct,” said Trimble.  Added Ng: “If they don’t respond and start representing us, we’ll just keep coming back and growing in numbers.”