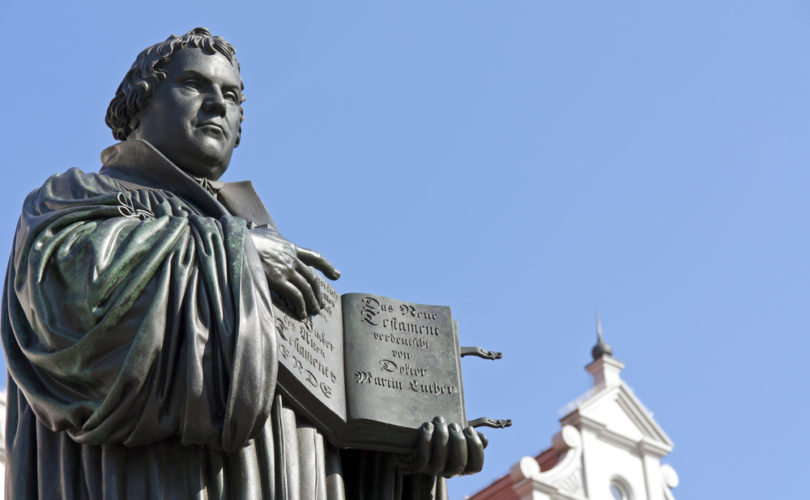 April 27, 2021 (LifeSiteNews) – Hundreds of priests in Germany have vowed to defy the Vatican’s ban on same-sex blessings. A much-hyped blessing service for same-sex couples titled “Love wins, blessing service for lovers” is planned for May 10 with more than 50 Catholic parishes so far signing up to offer such a blessing.

Last month, openly homosexual German priest Bernd Mönkebüscher created a Facebook post to protest the Congregation for the Doctrine of the Faith’s March 15 declaration that the Church cannot bless same-sex relationships since God “does not and cannot bless sin.”

Mönkebüscher called the Congregation’s teaching “outdated” in his declaration of protest created with the help of Burkhard Hose.

“In view of the refusal of the Congregation for the Doctrine of the Faith to bless homosexual partnerships, we raise our voice and say: We will continue to accompany people who commit to a lasting partnership and bless their relationship,” the declaration of protest states.

“We do not refuse to celebrate a blessing. We do this in our responsibility as pastors who promise people at important moments in their lives the blessing that God alone gives. We respect and appreciate their love and, moreover, believe that God's blessing is with them. Theological arguments and insights have been sufficiently exchanged. We do not accept that an exclusionary and outdated sexual morality is carried out on the backs of people and undermines our work in pastoral care,” the declaration added.

Mönkebüscher told LifeSiteNews that his declaration has received the support of more than 2,500 individuals, 551 of whom are priests. The declaration has already been sent to the head of the German Bishops' Conference, Bishop Georg Bätzing.

Bishop Bätzing, in comments this week about the May 10 event, said that it would not be a “helpful sign and a way forward.”

— Article continues below Petition —
PETITION: Call for Vatican to rescind restrictions on private and traditional rite Masses at St. Peter's
Show Petition Text
19371 have signed the petition.
Let's get to 20000!
Thank you for signing this petition!
Add your signature:
Show Petition Text

“Of course, people with a homosexual orientation, including those living in a same-sex partnership, have a place in the Church. They are welcome to us. It is part of the pastoral ministry of the Church to do justice to all these people in the respective concrete situations on their path through life and to accompany them pastorally. In this context, however, I do not consider public actions, such as those planned for May 10, to be a helpful sign and a way forward. Blessing services have their own theological dignity and pastoral significance. They are not suitable as an instrument for ecclesial-political manifestations or acts of protest,” he told Dbk.de.

Bätzing defended the bishops’ Synodal Path as the proper context for having a discussion about blessings for same-sex couples.

“In Germany and in other parts of the universal Church, there have been discussions for some time about the way in which the Church's sexual morality, also regarding homosexuality, can be further developed with viable arguments — on the basis of fundamental truths of faith and morals, progressive theological reflection, and likewise in openness to more recent results of the human sciences and the life situations of people today. This also includes an appropriate discussion of the question of blessing services. In the present situation, the Synodal Path is a central place to discuss the topic of successful relationships in a comprehensive way,” he said.

It is expected that many of the priests who supported the declaration of protest will be giving blessings to same-sex couples on May 10.

Bishop Franz-Josef Overbeck of Essen, who has called for the Church to reassess homosexuality, has stated that priests in his diocese who bless same-sex couples next month will face no canonical consequence.

Spanish Bishop José Ignacio Munilla Aguirre of San Sebastián reacted to news of the blessing event in Germany with a call to Catholics around the world to pray for the Church in Germany so that it be faithful to the Magisterium and not to fall into schism.

“I invite you to join a chain of prayer and fasting for the unity of the Church in Germany and throughout the world. Lord, grant us communion in fidelity to the Magisterium of the Church,” he tweeted April 14.

Cardinal Raymond Burke commented last month that defiance to the Church’s teaching against same-sex blessings shows that an “aggressive homosexual agenda” is dominating those who have been elevated as shepherds.

“The blowback is simply an expression of a worldliness, a mundanity, which has entered into the Church by which the aggressive homosexual agenda is now dominating even in certain ecclesial circles and even among certain bishops,” Cardinal Burke, who is the former head of the Vatican's highest court and one of the world’s foremost canon lawyers, told EWTN’s Raymond Arroyo in a March 25 interview.

Burke went on to say that shepherds who openly defy the decree should voluntarily “renounce” their office.

“The bishop, if he's pained by what's declared by the Congregation of the Doctrine of the Faith, then he must examine himself with regard to his own coherence with the Catholic faith. And if he is not holding to the Catholic faith, then he should renounce his office. He has to be relieved of his office as diocesan bishop, because this is simply unacceptable. It can’t be,” Burke said.