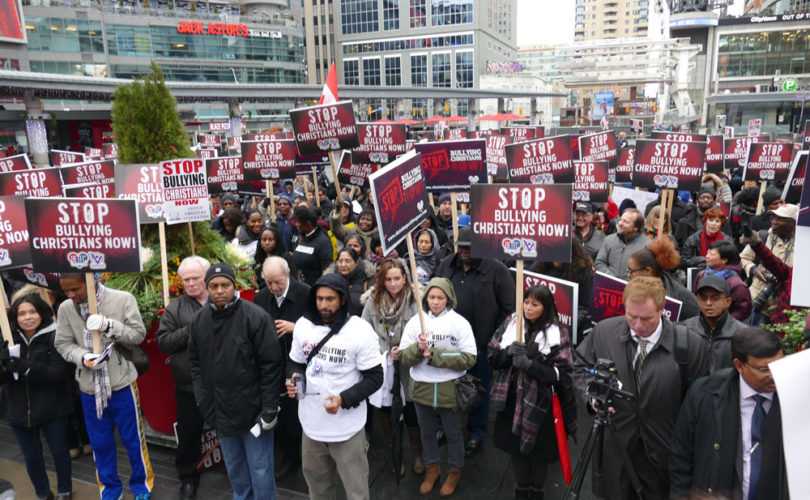 Participants listen to speakers at the November 21 “Stop Bullying Christians” rally at Toronto’s Dundas Square, which organizers say drew a crowd of about 600 to 700 people.Lianne Laurence / LifeSiteNews

TORONTO, November 24, 2015 (LifeSiteNews) – An estimated 600 to 700 participants at the “Stop bullying Christians” rally prayed, listened, waved signs, danced and sang hymns in Toronto’s Dundas Square on a cold, overcast Saturday afternoon before marching to City Hall to protest what they say is the city’s blatant discrimination against Christians.

Rally organizer David Lynn urged the crowd, which gathered on one side of Yonge Street to face an Eaton’s Centre teeming with Christmas shoppers, to stand up for their Christian faith whatever the cost.

“Stop being afraid!” said the charismatic street preacher and pastor-founder of the non-denominational Christ’s Forgiveness Ministries. “I am a Christian! You are a Christian! And being a Christian is the greatest thing that you could ever be!”

The rally was the latest pushback against the City of Toronto and the management board of Yonge-Dundas Square’s October decision to ban the Christian group, Voices of the Nations (VON), from using the square for its annual August music event.

Voices of the Nations was denied a permit to use the square for the first time in six years because it allegedly violated a law against proselytizing in the public square.

“If you’re praising Jesus, ‘praise the Lord,’ and ‘there’s no God like Jehovah,’ that type of thing, that’s proselytizing,” Natalie Belman, manager of events for Yonge-Dundas Square, told VON’s Leye Oyelami, as verified in an audio recording obtained by LifeSiteNews.

LifeSiteNews subsequently launched a petition urging the city to repeal its decision, drawing about 30,000 signatures. VON director Peter Ruparelia has delivered it, along with a 10,000-name petition from TheRebel.media, to Mayor John Tory’s office.

(The LifeSiteNews petition is still active and has reached 34,153 signatures, and VON now has its own petition as well.)

Calgary-based Justice Centre for Constitutional Freedoms, acting on VON’s behalf, threatened to sue the City of Toronto for violating VON’s religious and freedom of expression rights if it did not repeal the decision by November 10.

JCCF is now appealing the Dundas-Yonge management board’s decision to the City of Toronto on December 10, on VON’s behalf.

Dr. Charles McVety, president of Canada Christian College, told Saturday’s rally that Christians should be at that public appeal hearing.

“The public, that’s us, this is our city,” he said. “We need you to be there front and centre. The government doesn’t always recognize the power of God, but they do recognize power.”

Faith Goldy, Christian political commentator and broadcaster, told the rally that Voices of the Nations experienced not just bullying but “illegal censorship.”

“And the truth is that in this country, there is a new normal, and that is that Christians can be treated as second-class citizens,” she said.

She pointed to other examples: Justin Trudeau, Liberal prime minister, “bans pro-lifers from his party,” while Ontario’s Liberal premier Kathleen Wynne “institutes gay-straight alliances and an insidious, secular sex-ed into schools that have the denominational right to teach that Jesus Christ is Lord.”

“And now we are being told we cannot say ‘Jesus’ in public?” she asked. “I have a right to freedom of religion, expression, assembly, conscience, and I will exercise that right.”

“Why so quiet, Mr. Mayor? Would you allow Muslims to be banned for daring to utter the name ‘Mohammed’? Why can we not say ‘Jesus’ in this square?” she asked rhetorically, before exhorting the crowd: “Say it with me: ‘Jesus! Jesus!’” and the crowd responded enthusiastically, as the square resounded for several minutes with the name of “Jesus!”

“I hope Mayor Tory can hear you all the way from City Hall,” observed Goldy. “Because he better get used to it, because we’re not going anywhere.”

VON director Ruparelia told the rally that “to this day” the City of Toronto has not contacted him, despite a VON delegation, including himself, hand-delivering the 40,000-name petition. “So basically, they’re telling us that 40,000 people’s opinion doesn’t matter.

Moreover, had it not been for their lawyers with the Justice Centre for Constitutional Freedoms, VON would not even be aware there was an appeal process, Ruparelia said.

“It’s sad … we live in one of the best cities in the world, where all religions and cultures abide together in unity and peace,” the softspoken Ruparelia told the rally. “So it just saddens me that [the city] didn’t even email us or even acknowledge us.”

He urged rally participants to contact their city councilors to protest the decision.

“I just want to thank those who came out today, from the bottom of my heart,” Ruparelia said. “We need to show unity, and right now I see unity, I see every culture, I see every denomination. We are one. I thank you.”

Organizer Lynn told the crowd about his own experience of persecution in his street ministry, and that he had listened to the audio between VON’s Oleyami and Belman “and it was awful.”

But “God arranged this situation so we could come together,” Lynn said.

“It’s funny, I’ve learned…that every time the enemy tries to stop the Gospel, all that God does is use that to bring Christians together and to create a louder voice,” he told the crowd. “So I’m encouraged today to know that Christians are coming together, standing up and being empowered.”

Lynn told LifeSiteNews that “coming to a rally, this is a new thing for the Christian community.”

He sees two reasons for this. “I think a lot of Christians may not know there is a strong anti-Christian bias” in the culture, “or if they do, they’re afraid to talk about it. They don’t want any trouble, they just kind of let it go.”

Lynn says that the anti-Christian prejudice “is getting worse,” but that in the history of the Christian faith, “great revivals” have occurred in the midst of persecutions.

“I’m believing that Toronto will see a revival and many will get saved, and we might just spare another generation before the coming of our Lord and Savior Jesus Christ,” Lynn said. “It’s possible, and as we can see, so many people are rising up. It is possible.”

McVety, too, stressed that Christians need to unite and stand up.

VON’s Ruparelia is “under attack, and we as a church stand with him, because we know that if he falls, we fall,” he stated in prayer. “If he loses his right to proclaim Jesus Christ as Lord, then we lose our right.”

Ruparelia’s wife Beena, who converted to Christianity from Hinduism, agreed. “We need to stand for Jesus,” she told LifeSiteNews. “It’s about souls. The Bible says that we have to win souls and spread the Gospel.”

She reiterated that Voices of the Nations is willing to “go right to the Supreme Court” to reverse the decision by the Dundas-Square management, but right now they are looking to the appeal.

“We’re just going by faith. We’re fasting and praying that they’ll overturn their decision on December 10.”

Those who wish to donate to Voices of the Nations, sign their petition, or want more information on December 10 appeal, can go here.