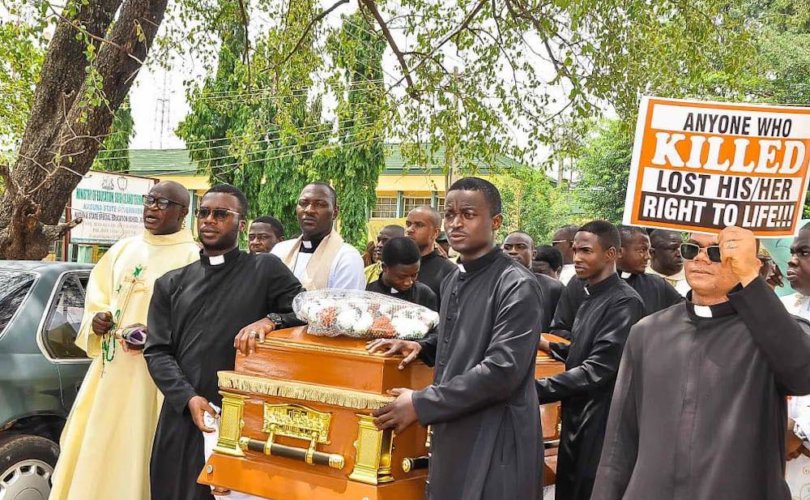 KADUNA, Nigeria (LifeSiteNews) – A group of over 700 priests staged a peaceful protest on Thursday before the burial of a Nigerian cleric who was killed by Islamic terrorists in the northern state of Kaduna.

Fr. Vitus Borogo (50) was murdered last Saturday during a raid at Prison Farm, Kujama, while his brother was abducted by the attackers.

The following day saw Father Christopher Odia (41) abducted from his rectory in the southern state of Edo and killed by his kidnappers.

Priests from the Archdiocese of Kaduna held placards saying “We Are Priests, Not Terrorists!!!” and “Anyone Who Killed Lost His/Her Right To Life!!!” before the burial of Fr. Borogo.

Archbishop Matthew Ndagoso told mourners that Nigeria had become a failed state under President Muhammadu Buhari due to the breakdown of security experienced across the country.

“But in our confusion and trauma, we believe God is in it,” he said at the Queen of Apostles Catholic Church. “And this is what gives us hope and a reason to live.”

The archbishop prayed not just for the Borogo family, but also for their persecutors.

“They are human beings and therefore they are not beyond redemption – nobody is beyond redemption,” Archbishop Ndagoso said. “It is our hope and prayer that God in His time will touch the hearts of these people to lay down their arms and allow their fellow citizens to live their normal lives.”

Fr. Borogo was a chaplain to Kaduna State Polytechnic college, while Fr. Odia was a school principal.

The Diocese of Sokoto shared better news after the tragic deaths, however, when two Catholic priests, Fr. Stephen Ojapa and Fr. Oliver Okpara, were released from captivity.

The priests were kidnapped in the early hours of 25 May according to Vatican News, after gunmen attacked the rectory of St. Patrick’s Catholic Church, Gidan Maikambo, in Katsina state.

Two other persons abducted with the priests were also freed.

“With hearts full of joy, we announce that our brethren Fr. Stephen Ojapa, Fr. Oliver Okpara, Mr. Hassan Hassan & Ms. Ummie Hassan who were abducted by gunmen at midnight of 25th May, 2022 in the rectory of St. Patrick’s Catholic Church, Gidan Maikambo, Kafur LGA of Katsina State, have all gained freedom,” the statement read.

“We thank you for your prayers, support, encouragement and show of love. May the Name of the Lord be praised, now and forever. Amen.”

Fulani Islamists and the Islamic State of West Africa Province (ISWAP) continue to wreak havoc in large swathes of Nigeria.

Eight people were killed and 38 kidnapped on June 19 at a Catholic Mass and a Baptist service in the northern state of Kano.

The government suspects the terrorist group Islamic State West Africa Province (ISWAP) was responsible for the June 9 attack, though ISWAP has not claimed responsibility.