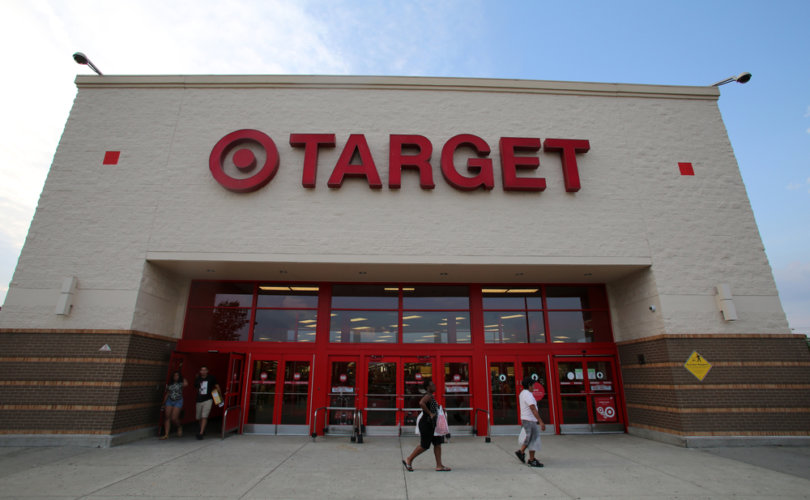 April 26, 2016 (LifeSiteNews)—Over 750,000 people have pledged to boycott Target over the company’s new policy allowing men to use women’s bathrooms.

The American Family Association, which launched the petition, says the fact that it’s generated such a large response in only five days shows how outraged Americans are.

“American families are concerned about their wives and daughters being harmed by predators or voyeurs who will now have more freedom to enter women’s bathrooms,” AFA president Tim Wildmon.

“There are many more sex offenders in America than transgender people, so we believe that Target should keep separate facilities for men and women, but for the transgender community and for those who simply like using the bathroom alone, a single occupancy unisex option should be provided, as AFA has proposed.”

Target announced its new policy last week, writing in a statement that it would allow people to use bathrooms based on their self-determined “gender identity” and not biological reality.

“Everyone deserves to feel like they belong.  And you’ll always be accepted, respected and welcomed at Target,” the company wrote in its statement announcing the new policy.

Clearly, the more than 759,000 people who have promised to boycott Target over this issue don’t feel that the company respects or welcomes them and their views on men in women’s bathrooms and vice versa.

Target spokeswoman Molly Synder defended the new policy as “inclusive,” despite the fact that many Target stores already offer “single-stall, family bathrooms for those who may be more comfortable with that option.”

“Target's policy is exactly how sexual predators get access to their victims,” AFA’s petition says.  “And with Target publicly boasting that men can enter women's bathrooms, where do you think predators are going to go?”

Over the past several years, there have been numerous cases of men using transgender bathroom policies as an excuse to enter women’s bathrooms and intimate facilities like locker rooms.

For example, in February, a Seattle man entered a swimming pool changing room and undressed in front of a young girls’ swim team, claiming he had the right to do so under transgender policies.

In 2014, a man was jailed after entering Ontario women’s shelters posing as a woman and subsequently committing sexual assault.  He was a convicted rapist and had a history of criminal sexual abuse.

Nearly a year ago at a Missouri Target, a man was arrested for illegally filming women in a dressing room.

Earlier this month, a Pennsylvania man was charged with invasion of privacy for spying on a 10-year-old girl in the bathroom.  He allegedly spent an hour in the women’s restroom viewing pornography and was later charged for possession of child pornography.

Unisex bathrooms are a “common-sense approach” and “reasonable solution” to the issue of transgendered customers, the petition suggests.  “Target should keep separate facilities for men and women, but for the trans community and for those who simply like using the bathroom alone, a single occupancy unisex option should be provided.”

Target’s new policy allows men to use women’s bathrooms
Sexual predator jailed after claiming to be ‘transgender’ to assault women in shelter
Man strips in front of girls in locker room, says transgender law allows it