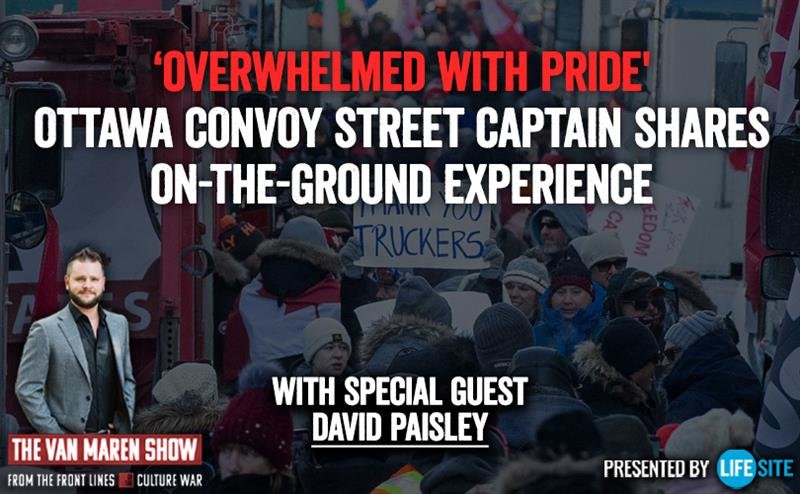 (LifeSiteNews) — This week’s guest on The Van Maren Show is David Paisley, an HVAC worker who’s been protesting with the Freedom Convoy in Ottawa over the past few weeks.

“This was so much bigger and encompassing than anything the organizers could have imagined or hoped for, really,” Paisley said. “And the great, true story of this is an incredible movement, grassroots movement. Perhaps the most incredible grassroots movement that, certainly in my lifetime, Canada has seen.”

Paisley, who became a protest street captain, described a scene where tens of thousands of fundamentally good people, united around the single goal of ending COVID mandates, looked out for each other and developed a sort of “organic city” within the capital.

“Garbage would start to build up, and so it’s like, well, we need garbage bags, so someone would take it upon themselves to buy some garbage bags. And then a certain trailer became the destination to drop off garbage bags if you had empty garbage bags,” he said. “And then there was snow, so the snow needed shoveled, and it started with one guy who had two or three shovels that he’d happened to bring with him in his work trailer. And people started using those to shovel. We quickly realized that’s not enough shovels. So word got out on social media: we need more shovels. And all of a sudden, hundreds of shovels showed up …”

Paisley noted how he felt “overwhelmed with pride” for his country and has been given a ray of “hope” after participating in the protests — feelings undoubtedly replicated in every other patriotic protester there.

Listen to this week’s episode below: