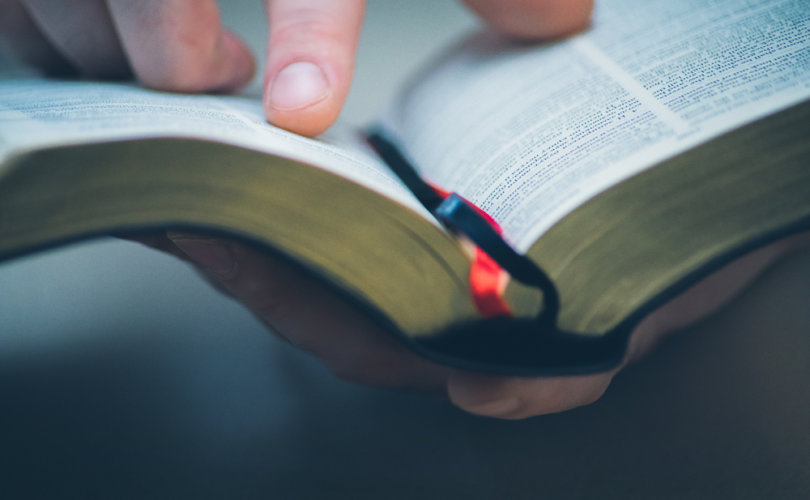 EDINBURGH, Scotland, July 30, 2020 (LifeSiteNews) ― The Catholic Bishops’ Conference of Scotland fears that the country’s proposed new “hate crime” legislation could criminalize the possession of a Bible or the Catholic catechism.

In a submission to the Scottish government on the Hate Crime and Public Order (Scotland) Bill, the Scottish Catholic bishops said they were concerned that the creation of new offenses within the multi-part legislation would impinge on civil liberties. Two of the proposed new offenses include “stirring up hatred” and “possession of inflammatory material.”

The provisions of the “stirring up hatred” offense are twofold yet imprecise. First, the behavior or communication must be threatening, abusive or, in the case of race, insulting. Second, either the actor must “intend” to stir up “hatred” against a protected group, or there is a “likelihood” that his or her behavior or communication will stir up “hatred” against a protected group. The bishops objected that the definition of “hatred” is so unclear it is open to “a wide interpretation.”

“The proposed threshold for an offence under the stirring-up provisions might be considered disproportionately low,” the bishops wrote.

They then provided a surprising hypothetical example: a group accusing a transgenderist of stirring up hatred against them for their biological realism.

“For example, A might disagree with B’s belief that a biological male cannot become a woman. A might even go so far as to say that B is ‘talking nonsense,’ and that he is ‘transphobic’ and say so either in person or on a social media platform such as Twitter. The term abusive means offensive or mistreating, and should B feel offended, the first case is met,” the bishops wrote.

“In terms of the second test, a group of people accompanying B deem the comments to be an intention to stir up hatred against them as a group, and thus the second test is met.”

“The test must be stronger and allow the law to be consistent and not forever stretched in multiple ways to meet the capricious sensibilities and mores of the current culture and public opinion,” they wrote.

The bishops more clearly defended the rights of Catholics and other Christians to publicly profess their beliefs in Scotland when they addressed the proposed new offense of possessing “inflammatory material.”

“We are also concerned that Section 5 of the Bill creates an offence of possessing inflammatory material which, if taken with the low threshold contained therein, could render material such as the Bible, the Catechism of the Catholic Church and other texts such as Bishops’ Conference of Scotland submissions to government consultations as being inflammatory under the new provision,” they wrote.

This time, the bishops offered as their example their own submission to the government on its proposed reform of the Gender Recognition Act 2004. In their submission, they had explained that the Catholic Church teaches that sex and gender are not “fluid and changeable” and that “male and female are complementary and ordered towards the creation of new life.”

“Such pronouncements, which are widely held, might be perceived by others as an abuse of their own, personal worldview and likely to stir up hatred,” they warned.

The right of Catholics to profess their beliefs about human anthropology was stressed later in the document, saying that the above opinions would need a “freedom of expression provision” in the proposed law for their protection from prosecution.

The bishops observed that “prominent public figures” have been accused of “hate” and “transphobia” for arguing that a man cannot become a woman and vice versa. They also cited people accused of “hate” simply for using pronouns corresponding to someone’s biological sex. They deplored the rise of “cancel culture” and hinted that some groups were being unfairly allowed to silence others.

“No single section of society has domination over acceptable and unacceptable speech or expression,” they wrote.

“Whilst the legislature and judiciary must create and interpret laws to maintain public order it must do so carefully, weighing in fundamental freedoms and allowing for reasonably held views, the expression of which is not intended to cause harm.”

The bishops warned that choosing censorship over the encouragement of respectful debate and tolerance would risk turning Scotland into “an intolerant, illiberal society.”

Anthony Horan of the Scottish Catholic Parliamentary Office told LifeSiteNews that the Scottish bishops picked the hypothetical example of biological realists prosecuting a transgenderist to underscore their desire for fairness.

“Whilst we could have used any one of a number of situations to highlight the low threshold for criminal liability in the proposed new offence, this example is a measure of the bishops’ desire for consistency under the law,” he said.

“The bishops feel that the criminalising of someone who calls another person a ‘transphobe’ is just as wrong as criminalising someone who directs an inappropriate but otherwise relatively harmless remark at someone with same-sex attraction or who is pro-abortion.”

One of the ironies of hate crime legislation being a worry to Scottish Catholics is that Catholics have been victims of prejudice and sectarian hate in Scotland since the 16th century. Although relationships between actual faith communities in Scotland are now good, individual attacks on Catholics and Catholic churches still occur.

“The Bishops’ Conference has long engaged on the issue of anti-Catholic hate and will continue to do so, though the problem there is not so much in the legislation or lack thereof, as in both the deep reformation culture pervading Scottish society and the aggressive element of the emerging secular culture,” Anthony Horan told LifeSiteNews.

“We have, on many occasions, pointed out the disproportionate number of anti-Catholic hate crimes under religiously aggravated offences.”

Horan said that recently the government has been more willing to shift from references to “sectarianism” and to talk specifically about “anti-Catholicism.” This marked change, he said, came about as a result of intense pressure from the Bishops’ Conference after a spate of anti-Catholic incidents.

“However, much work needs to be done and we will continue to do what we can to pressure the government and work with stakeholders to address this problem.”

Leaders of other communities in Scotland have come forward to warn of the dangers the proposed “hate crime” legislation poses to civil liberties in Scotland. The Presbyterian Free Church of Scotland has expressed its concerns that the proposed new offenses will be detrimental for free speech in Scottish society. Its leaders also fear for the criminalization of the Bible.

“In particular we are concerned that there is a lack of clarity about what is meant by stirring up hatred and both offences are incredibly subjective in terms of deciding when material is actually abusive or inflammatory,” they wrote.

“Given people have been reported to the police for potential hate crimes for displaying verses from the Bible, could the secular courts decide that the Bible itself is inflammatory material which should be confiscated and destroyed?”

The Scottish Police Federation released a statement saying that the bill could lead to its members, i.e. the police, having to “determine free speech.” They too believe that the wording around the offense of “stirring up hatred” is too vague.

“We are firmly of the view (that) this proposed legislation would see officers policing speech and would devastate the legitimacy of the police in the eyes of the public,” said Calum Steele, the General Secretary of the Scottish Police Federation.

“That can never be an acceptable outcome – and we should never forget that the police in Scotland police only with the consent of the people.”

J.K. Rowling, the author of the Harry Potter novels, is the most prominent resident of Scotland to be accused of hate and so-called transphobia. Rowling has sparked transgender activists’ ire by asserting women’s sex-based rights to privacy in prisons, domestic abuse shelters, and wherever else women are physically vulnerable. Rowling has also spoken up recently in defense of children against transgenderist medical experiments.