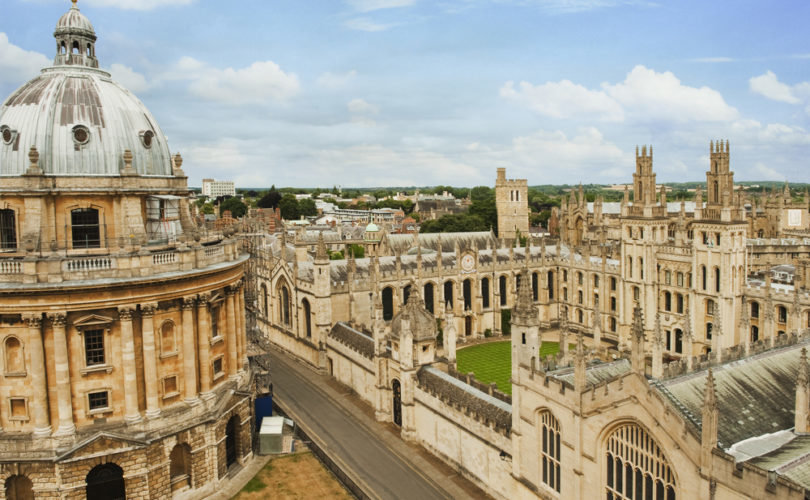 OXFORD – An attempt at Oxford University to restrict the activity of its student pro-life group has failed after the university’s student union voted 24-27 on May 28 to allow Oxford Students for Life to advertise their activities on campus.

The pro-life group’s website says they are “committed to fostering dialogue and education” on abortion, euthanasia, infanticide, and physician assisted suicide. “We also seek to provide women in need with practical help and support, so that they might feel free to choose life for their child, even in difficult circumstances.”

But Oxford University Student Union vice-president for women Sarah Pine alleged that the group was attempting to impose their will on expectant mothers with “directive counselling.” She put forward a resolution calling on the union “to instigate and maintain an advertising ban on LIFE and other organisations which provide directional abortion advice.”

The motion included a clause wherein the union would pledge “never to platform any group or organization which provides directional advice around abortion or explicitly stands against women’s right to choose.” According to Oxford Students for Life, in a statement on its website, the clause “seemed to go way, way beyond advertising regulations.”

The motion, according to the student union’s minutes, said that because “1 in 3 women in the UK will have an abortion” and “many Oxford students will have had an abortion or will choose to have one whilst being a student,” the council “has a pro-choice policy” that says the “best person to make decisions around pregnancy is the person themselves.”

“The organisations that give misleading advice can be actively harmful,” the motion adds. “Anti-choice messages can be triggering and harmful for people that have chosen to terminate a pregnancy.”

At the student union meeting, Oxford Students for Life members and supporters were told that the rule would not apply to religious groups with “pro-life views,” and was only meant to apply to student societies that “stand against women’s right to choose.”

But Oxford Students for Life said in their statement that their group’s mandate does not include such a stand. “Opposing women’s right to choose is no part of our campaigning; what we campaign for is the dignity of human life at every stage,” they explained.

The pro-life group, in a description of the event on their Facebook page, and republished on their website, said that the people proposing the ban “came across as decent people whose concern for women’s welfare is genuine – just as ours is.”

“But then democratic freedoms aren’t necessarily lost because of devious plots; they’re often lost out of apathy and sloppy thinking,” the post suggested.

Laura Keynes, an Oxford graduate and social commentator for a variety of British publications, said that the Oxford University Student Union’s attempt to restrict the pro-life group is just the latest example of left-liberal and feminist “totalitarianism” with its urge to oust the principle of freedom of speech.

In a piece at The Conservative Woman, Keynes notes that she experienced a crisis pregnancy while undertaking her doctorate at Oxford. “Had I known of a university crèche next to the library, or a faculty that tolerated sleeping babies in lecture theatres, I might have felt able to continue the pregnancy and my studies. OSFL wants students to have more not less – parenthood and an education, life for mother and child – not either/or,” she wrote.

Pro-life advocates’ freedom of speech was also under fire at Cambridge University Wednesday as pro-abortion demonstrators protested a debate on campus. Organized by the Cambridge Students for Life in conjunction with the Cambridge Medicine Society, the debate was titled “Abortion on the Grounds of Disability.”

“Whenever reproductive rights are debated, legitimacy is given to anti-choicers and we put our access to reproductive rights (which are already at risk, and always contested) in serious danger,” the group stated. The Varsity wrote that the demonstrators were not allowed into the debate hall, but held “a three-minute silence in solidarity with all women who have been denied an abortion.”

The Cambridge Medicine Society’s side in the debate was represented by Ann Furedi, head of the British Pregnancy Advisory Service, one of the UK’s busiest abortion organizations. The Varsity said Furedi was “reportedly sorry to see that the protesters did not want the issue discussed.”

The demonstrators chanted slogans and passed out leaflets to passers-by, and said, according to The Varsity, “Debate is a conversation of power, where the objective is to win: to overpower the other side. This is violence. It is not ‘discussion’.”

Keynes wrote, however, that the work of pro-life groups on university campuses is in fact about “changing structures on campus so that students who find themselves pregnant and unsupported can continue to study.”

“It’s about discussing interesting philosophical, medical, and ethical questions around when life begins. There are some too blinkered by ideology to see this,” she continued. “Liberal orthodoxy tells them pro-lifers are right-wing religious nut jobs, hell bent on taking women back to the Dark Ages, and the only response is to ban and censor pro-lifers on campus. No debate, end of discussion.”

Oxford Students for Life said, “Pro-choice groups have said very little of late about gendercide, or about the appalling disability discrimination which is fixed into UK abortion law, or about the increasing public awareness of the humanity of the unborn.”