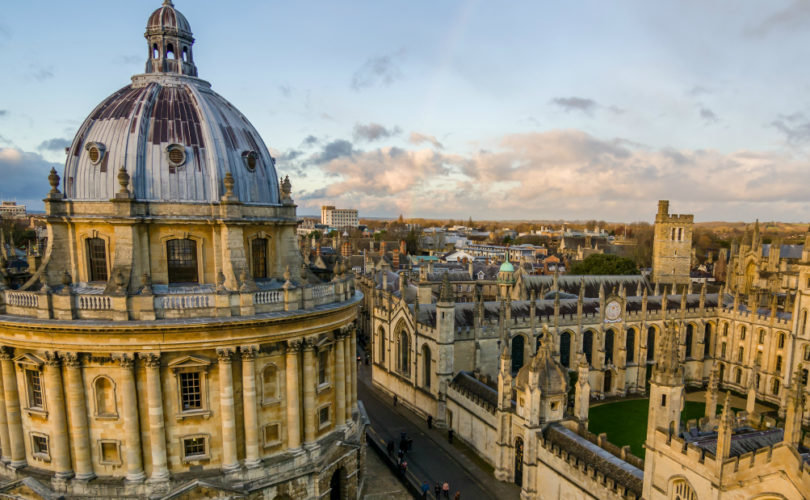 The small group of pro-life students at Oxford University say that they “didn’t ask to be in the middle of a free speech controversy,” but the controversy has coalesced around them. The most famous university in the English-speaking world refused to allow a debate on abortion to go ahead last week, citing possible “mental and physical security issues” after the university’s officially-sponsored feminist group threatened to disrupt it.

Oxford Students for Life issued a statement expressing their surprise that the debate was canceled, since other debates on similar topics have been sponsored by the group and have been “conducted without a hitch.” A member of OSFL, who has asked not to be named, told LifeSiteNews that after the Christ Church college censors refused to allow them to use their booked venue, they had still hoped to go ahead in a new location but there was not enough time, and the event was canceled on the morning of November 18, even as the speakers were arriving.

He told LifeSiteNews, “Whereas feminists used to complain that no opposing view was given [supporting] the opposite side in pro-life talks, here they are objecting to a debate even when the opposing side is given!”

The student said the college censors claimed that because the lecture theatre is in a residential part of the college, “the mob of protestors might have had the capacity to cause physical harm.” It was also suggested that the debate could be “triggering” for students who have had abortions.

The debate, scheduled for Tuesday, was to have been between Brendan O’Neill, the popular columnist and editor of Spiked, who has since been heavily critical of the decision to cancel the event, and American historian Tim Stanley. The motion was to have been, “This House believes that abortion culture harms us all.”

OSFL added, “Last year in Britain, over 185,000 abortions were carried out. What does this say about our national culture? Is it a sign of equality, or does it suggest we treat human life carelessly?” But the proposal to debate the moral value of abortion prompted howls of protest from self-described feminists in social media.

Brendan O’Neill has been outspoken in his criticism of the cancellation, calling the students involved in shutting it down representative of a new breed of “Stepford students,” who are happy to trade their intellectual freedom to “feel comfortable” and ideologically unchallenged. “Heaven help any student who doesn’t bow before the Stepford mentality.”

O’Neill’s response in the Spectator and the Telegraph has garnered much attention, since he was the one who was to have argued in favor of abortion in the debate, and he has published his intended speech for the Spectator.

OSFL posted a notice to their Facebook page on November 17 saying that the Women’s Campaign, a feminist activist group sponsored by the Oxford University Students Union, had “asked” them to cancel the event. The feminist group also demanded an apology for having attempted the debate. OSFL refused, saying, “it would be a shame if open debate was shut down,” but added that they would be happy to speak to any concerns and invited Women’s Campaign to a debate the following term.

“While we have hosted two all-women panel debates over the past year, this motion was about the wider social questions raised by abortion, and Tim and Brendan were invited as well-known commentators who have something to contribute to the discussion.”

Women’s Campaign published their demand that the event be canceled, saying they “condemn OSFL for holding this debate.”

“It is absurd to think we should be listening to two cisgender men debate about what people with uteruses should be doing with their bodies. By only giving a platform to these men, OSFL are participating in a culture where reproductive rights are limited and policed by people who will never experience needing an abortion,” the group said in a message that has since been removed but was saved by Buzzfeed.

Unknown persons who are thought by OSFL to be associated with Women’s Campaign, launched a Facebook page titled “What The F*** Is Abortion Culture?” that has since been removed, but garnered over 300 responses to their call to disrupt the debate. The text of their message was also saved by Buzzfeed, which quoted it as saying, “We don’t think this is okay so (assuming the event is still going ahead) we thought we should go and say hi!

“Bring your friends, and if you want take along some non-destructive but oh so disruptive instruments to help demonstrate to the anti-choicers just what we think of their ‘debate’.” Women’s Campaign also made a statement supporting a ‘disruptive protest’ if the debate was not canceled.

In response to the threats of disruption, Neil Addison, a legal expert in religious discrimination, wrote that “the college and the University appear to have failed in their legal as well as their moral responsibilities.” Students issuing the threats could be open to a charge of criminal harassment, he said. The “actions of the members of the threatening disruptive group could constitute a criminal offence of Harassment under s1A Protection from Harassment Act 1997 as applied by s7(3A) of the same Act.”

Both Christ Church College and Oxford University, he said, have “a legal duty” to “ensure that freedom of speech within the law is secured for members, students and employees of the establishment and for visiting speakers.”

On Thursday, in response to the uproar, Women’s Campaign issued a statement saying, “The WomCam committee would like to assure its members that it will be responding very soon to both Oxford Students for Life’s questions for the opposition of the debate and the recent Brendan O'Neill article on the front page of the Spectator. This is our highest priority, please bear with us and we will make a public response as soon as possible. Thanks.”

One student, Niamh McIntyre, boasted in an op-ed in the Independent, that she had “helped shut down” the Oxford abortion debate “between two men” because, “my uterus isn’t up for their discussion.”

“The idea that in a free society absolutely everything should be open to debate has a detrimental effect on marginalised groups,” she said. “The threat pro-life groups pose to our bodily autonomy is real, not rhetorical.”

McIntyre, identified at the Independent as “a second-year English student at Oxford University, and a writer interested in feminism and social justice,” wrote, “They thought it was appropriate to let men discuss if and when women should be able to make fundamental decisions about their own bodies.”

“Neither will ever have to consider having an abortion. As you can imagine, those of us with uteruses were incredibly angry that they were able to speak for and over us.”

Her article was blasted by a long string of commenters who accused her of a “Maoist” totalitarian impulse. “You are a basher of free speech and playing the victim card against what? being offended by ideas? This is specious, vacuous and means nothing at all. Such cognitive dissonance is astonishingly worrying,” one commenter wrote.

Brendan O’Neill responded to McIntyre on Facebook with an ironic jab, saying, “It’s not a debate between two men – because starting tomorrow morning I intend to identify as a woman for a 24-hour period. The transphobia of these protesters is DISGUSTING.”

In his Spectator piece, O’Neill called the protesters’ complaint that the two debaters had no right to speak because they had no uteruses “identity politics at its most basely biological.” He wrote in the Spectator that the demands of such protesters are now routinely “over-amplified on social media.”

He wrote, “At one of the highest seats of learning on Earth, the democratic principle of free and open debate, of allowing differing opinions to slog it out in full view of discerning citizens, has been violated, and students have been rebranded as fragile creatures, overgrown children who need to be guarded against any idea that might prick their souls or challenge their prejudices.”

“Where once students might have allowed their eyes and ears to be bombarded by everything from risqué political propaganda to raunchy rock, now they insulate themselves from anything that might dent their self-esteem and, crime of crimes, make them feel ‘uncomfortable’.”