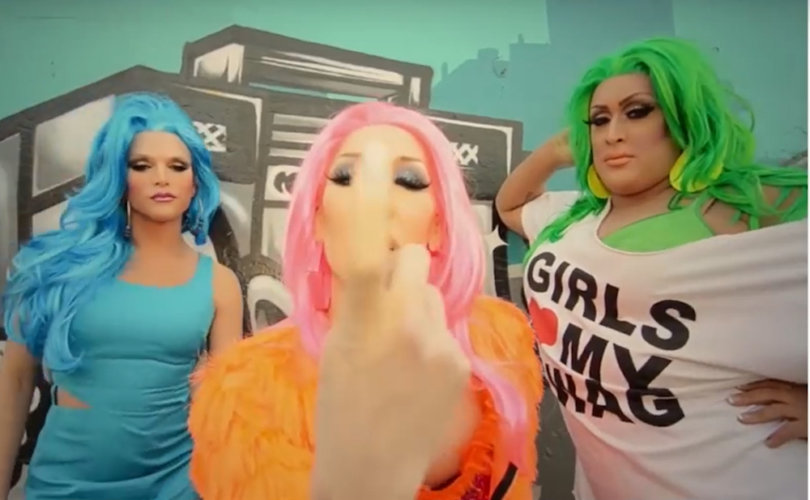 EMMAUS, Pennsylvania, July 3, 2018 (LifeSiteNews) — A Pennsylvania school district is under fire for showing students pro-homosexual videos without parents’ consent and refusing to let parents see the videos for themselves afterward.

For the pro-LGBT National Day of Silence on April 27, the Gay Straight Alliance (GSA) at Emmaus High School selected four videos that were played during morning announcements, the Morning Call reported. Two of the titles included “9 Questions Gay People Have About Straight People” and “Show your pride. Share your love.”

Those videos have since been identified. The BuzzFeed-produced “9 Questions” video features LGBT speakers mocking the description of homosexuality as a “lifestyle” rather than “just my life,” claiming gay couples not reproducing is a non-issue because “technically the world is overpopulated,” mocking straight people for being offended by assumptions that they’re gay, denigrating heterosexual marriage for high divorce rates, and more.

The YouTube-produced “Show your pride” is a compilation of videos of people “coming out” to their families and celebratory footage of same-sex “marriage,” set to Macklemore’s pro-homosexual anthem “Same Love.” A third video was dedicated to “educating students about gender fluidity – the idea there is no such thing as male or female,” according to conservative radio host Todd Starnes.

The videos, played without notifying parents in advance, provoked outrage among the community, with parents gathering to confront the East Penn School Board at a June 11 meeting.

“I do not support a publicly funded school pushing any political or social views on children,” parent Mike Huff said of the “purposeful, planned, indoctrination videos, which he said made his son feel “bullied” for being straight.

“Our community deserves much better than this from the administration and the school board,” parent Michelle Blagbrough agreed, citing a section of the state school code that guarantees parents a “process for the review of instructional materials” and a “right to have their children excused from specific instruction that conflicts with their religious beliefs.”

Superintendent Michael Schilder responded by claiming that because the videos were part of student projects rather than “staff work,” they didn’t qualify as “curriculum” subject to parental review. He even went so far as to tell WFMZ that this particular work “needs to be protected from public scrutiny.”

“A parent or member of the public has no right to view or access a student's term paper, speech, or multimedia project just because he or she objects to the topic,” Schilder elaborated, though he did give parents the videos’ titles and descriptions.

The religious freedom law firm Liberty Counsel intervened in the case with a June 22 letter arguing that Schilder’s defense “does not pass the straight face test,” because the “links to the videos are public records” rather than student-generated content, and parents are not seeking any information about the students in the GSA.

Liberty Counsel’s Richard L. Mast Jr. called the district’s formulation a “convenient” way to “bypass all public records laws and parental notice and consent requirements for objectionable content” by simply “finding a willing ‘student group’ to ‘select’ the material for them.”

Mast noted that many GSAs are affiliates of the Gay Lesbian Straight Education Network (GLSEN), and that “GSA ‘advisers’ frequently plan and instigate the activities of the GSA, and pass them off as ‘student-led’ and initiated.”

“(R)egardless of whether the students of the GSA ‘selected’ the YouTube video links shown to the other students (against the will of many) and without their parents’ knowledge or permission, those video links must be provided to parents upon request,” the letter continued. “District Policy 815, Acceptable Use of Technology Resources, Electronic Communication, and Information Systems clearly states there is ‘no expectation of privacy’ in videos ‘sen(t)’ or ‘display(ed)’ with its technology resources.”

“It is troubling that the school district intentionally hides its LGBT indoctrination from the parents,” Liberty Counsel president Mat Staver told Starnes. “The school district has harmed students with its radical LGBT propaganda.”

Schilder announced his retirement last December and stepped down on June 14.