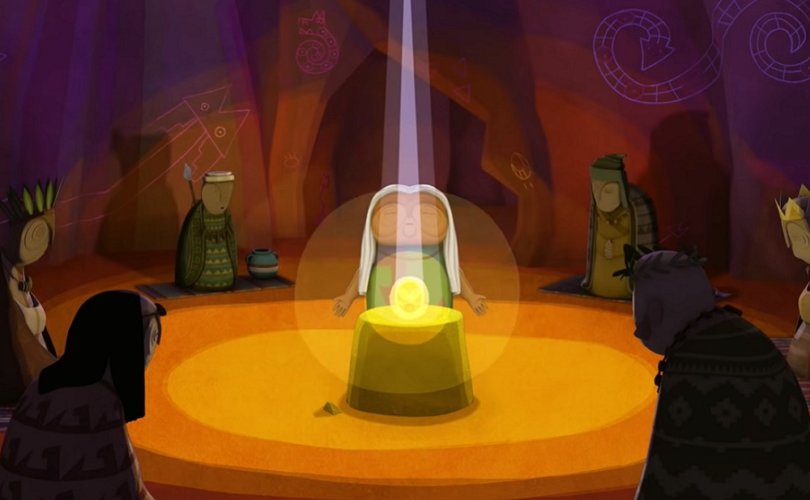 December 3, 2019 (LifeSiteNews) — The French animated movie Pachamama is proof – if proof is needed – that the “Mother Earth” cult that spectacularly revealed itself in the Vatican from the start of the Amazon Synod is being touted far more widely across the world, and that children in particular are being enticed to love and honor the pagan divinity of the Andes in the shape of “the Planet” for which all sacrifices must be consented to.

Pachamama, the story of the journey of initiation of two pre-Columbian children of the Andes, first opened in theaters in France in December 2018. While it is usual for films aimed at school-age children to come out just before the Christmas vacation, the date chosen for its release is significant: December 12, the feast day of Our Lady of Guadalupe, Empress of the Americas, the Pregnant Virgin and sweet Mother, who revealed herself to Saint Juan Diego in Mexico in 1531, sparking off the mass conversion of millions of Indians to the Catholic faith brought to them by the Spanish conquistadors who had arrived in the country some ten years earlier.

The majority of the indigenous Aztecs and Mayas of the region must still have remembered the terrifying times of human sacrifice when the serpent god, Quetzalcoatl, and other divinities were given their due of human victims — up to 80,000 in four days for the inauguration of a new temple — and the vision of the gentle but regal figure of the Virgin Mary was for them a complete novelty. Their pagan gods were frightening in their ugliness and evil in their demands; Our Lady of Guadalupe came with a message of love and of trust, to speak of the true God:

Know, know for sure, my dearest, littlest, and youngest son, that I am the perfect and ever Virgin Holy Mary, Mother of the God of truth through Whom everything lives, the Lord of all things near us, the Lord of heaven and earth[.]

Am I not here, I, who am your Mother? Are you not under my shadow and protection? Am I not the source of your joy? Are you not in the hollow of my mantle, in the crossing of my arms? Do you need anything more? Let nothing else worry you, disturb you.

She appeared on the hill of Tepeyac, where the temple of Tonantzin — yes, the goddess “Mother Earth” of the Aztecs known as “Pachamama” farther south in the Andes — had been destroyed by the Spaniards. Also known as Coatlicue in the Aztec pantheon, she was an unpleasant divinity, wearing a “skirt of serpents” and a necklace of severed hands, human hearts and skulls. Modern anti-Catholic historians are wont to identify the pagan goddess with Our Lady of Guadalupe, who they say is honored by indigenous Americans as an occult representation of their former goddess.

This syncretic (and blasphemous) interpretation of a fully Catholic veneration for the Virgin Mother of God must have presided over the choice of the release date of Pachamama, which unapologetically makes propaganda for the cult of nature and the idolatry of “Mother Earth.”

The animated film has been available to international audiences on Netflix since last June.

Remarkably, Pachamama has received particular acclaim from the French public education system, which considers it suitable to show to classes in elementary schools. Special teaching kits accompany the film, offering explanations and activities to accompany school viewings. Many teaching authorities in France — regional “académies” — have made these kits available to their personnel, thereby joining in the promotion of the film.

Considering that the French public education system is supposed to be secular and neutral toward all religions — and that it is, in fact, hostile to all of them, even if Catholicism is most badly treated — such promotion of a film that propagandizes religious veneration, sacrifice, and prayer to the Earth goddess is surprising, to say the least.

In the same way, “Pachamama” received enthusiastic reviews from the mainstream press in France, which would never dream of doing the same for films with a Catholic message.

Reviewers fell over themselves to commend the quality and the “poetry” of Pachamama’s graphic design. They spoke of the “vibrant” color scheme chosen by director Juan Antin — the typical greens, fuschias, yellows and reds dear to the Andean Indians — for his hero people: traditional inhabitants of the mountain regions of South America who are presented as being oppressed by the powerful Inca tribes and then by the more cruel destructiveness of the conquistadors, all in black and red.

Besides, the “good,” Earth-loving Indians have soft contours in plant-rich decors, while the Incas are angular and cubic, resembling their stone cities and temples, while the Spaniards are designed to look sharp and metallic like their death-weapons, using only the words “oro” (gold), “diamantes” (diamonds), “esmeraldas” (emeralds), “demonios” (demons, to qualify the Earth-worshipers).

Such are the easy tricks used to point all sympathies only one way.

The story itself is an ambiguous one. Telpulpai and Naira, who are both on the threshold of adolescence, hope to be received into the adult community during the upcoming ceremony of worship of Mother Earth, Pachamama. All are expected to sacrifice what they love most to the pagan divinity: the boy, Telpulpai, fails the test because he hides the feather he stole from a condor, while the girl, Naira, offers her pet llama to the sacrificer’s knife.

Historically, animals and even human beings, especially beautiful children, were killed during these ceremonies that took place around a blanket spread on the ground or a hole dug out to symbolize Mother Earth’s “womb” in order to give her food and drink to compensate for all that had been taken from her in the previous year, and to prevent the terrifying earthquakes with which she would show her discontent.

In the film, the shaman presiding over the cult holds back his knife when raindrops start to fall, and he says Naira’s offering was accepted but needs not be sacrificed because “Pachamama” is content already.

A “huaca,” or golden artifact representing a sacred symbol, plays a large part in the cult. A female elder shaman, Wallumama, takes the two heroes to the cave of the ancestors where it is kept — a cave guarded by great, ugly serpents among whom Wallumama, Telpulpai, and Naira walk without fear. In the cave itself, the mummified elders of the tribe stand guard around the egg-shaped “huaca” that is taken down to the village once a year.

There, the arrival of an Incan tax-collector who violently snatches the huaca to take it back to the emperor of the Incas sets off the storyline: the voyage of initiation upon which Tepulpai embarks, disobeying the shaman in order to bring back the tribe’s sacred object. Naira, although she is good and obedient to the laws of her tribe, in her turn disobeys and follows her friend.

Of course, the two are successful and return home just before the arrival of the Spanish conquistadors, who will be destroyed by the snakes and the power of the Pachamama while the recovered huaca brings with it life and fertility, and Telpulpai is accepted as a new young shaman.

Pachamama is Mother Earth, the spirit of the earth in a spiritual sense. In Amerindian cultures, man is part of the Pachamama, there is no separation between the two. It is a very different approach from that of our modern western culture, in which man is separated from nature and dominates it. This separation leads to a materialistic approach, which carries with it all the excesses we know: to make nature one’s own is potentially to destroy it.

The message is that we must share with the Earth the resources we produce, and not destroy everything for the sole purpose of accumulating wealth. It is the message defended by these pre-Columbian peoples that inspired us. They were invaded, robbed and dispossessed, but their culture remains a living heritage. This film is also there to help highlight them, because they have answers to the ecological crisis we are going through.

The rhetoric is exactly the same as what was deployed during the Amazon Synod: a message of “harmony” between man and nature, with nature portrayed as the oppressed nourishing Earth and man as its greedy exploiter and destructor.

The words of the film’s theme song are clear enough:

I am the tree, I am the stone, I am all and I am not; I am the child and the cactus, we are all one.

Pachamama, Mother Earth, forgive mankind; We are the new earth.

Sowing seeds of life in hearts.

Roots in the Earth, branches reaching to the sky.

I thank Mother Earth, all my ancestors; the moon and the stars, the whole universe.

The song is clearly a prayer, and a primitive, pantheistic one.

It is being touted to children as the answer to Earth’s problems, while at the same time, they have been indoctrinated about “global warming,” “exploitation” of earthly resources, and “climate change.”