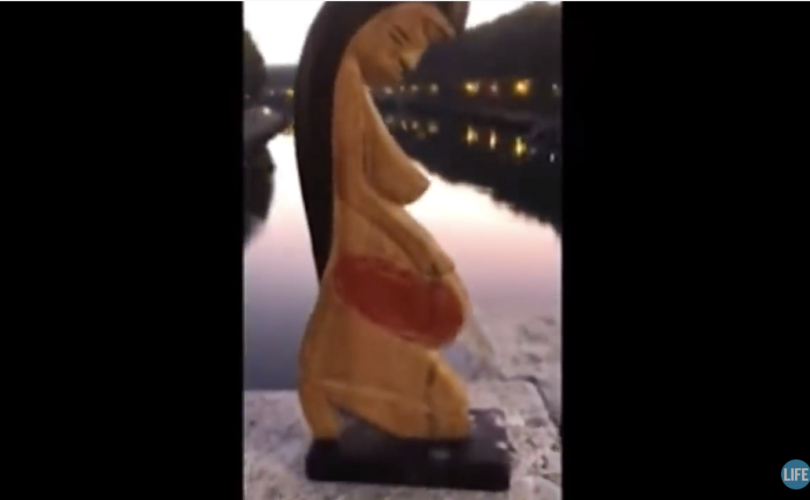 ROME, October 23, 2019 (LifeSiteNews) — Vatican media reaction to the hurling of the “Pachamamas” into the Tiber River this week has spanned the alleged five stages of loss and grief, from denial to anger to bargaining. But it has yet to reach the final stage of understanding and acceptance.

Despite the varied response from Vatican media officials, informed sources have told LifeSite that if you want to get normal people working in the Vatican to smile, just say “Splash!”

SIGN PETITION: Call on Vatican to remove all “pagan” symbols from St. Peter's and the Synod Hall! Sign the petition here.

Hours after a video emerged on social media on Monday, capturing the seizure and plunge of several replicas of the controversial statue into the Tiber River, Vatican media officials were asked for their reaction.

The prefect of Vatican communications and president of the Amazon Synod information commission, Paolo Ruffini, denied the need for a Vatican response. Ruffini said that “stealing” something from a public place and “throwing it away” is a “stunt.”

“We already repeated several times here that the statue represented life, fertility and Mother Earth,” he said. This was in fact the first time Ruffini openly called the image ‘Mother Earth’.

“It’s an act that, it seems to me, contradicts the spirit of dialogue that should always animate everyone,” he continued. “I don’t really know what to say except that it was a robbery that, perhaps it speaks for itself.”

Seemingly tone deaf to the concerns of many ordinary Catholics, and seeking to further downplay the statues’ jettison and journey down the Tiber, Fr. Giacomo Costa, also a member of the synod’s information commission, said it was “meaningless” to keep highlighting the statue, which “along with a parrot and a bottle of water,” merely “represented life in the Amazon.”

But downplay soon turned to indignation on Tuesday, when Vatican editorial chief, Andrea Tornielli, penned a front-page article in L’Osservatore Romano accusing the unidentified “new iconoclasts” of a “violent and intolerant act.”

“An image of motherhood and the sacredness of life, a traditional symbol for indigenous peoples representing the bond with our ‘mother earth,’ as described by Saint Francis of Assisi in his Canticle of the Creatures, was thrown away with contempt in the name of tradition and doctrine,” Tornielli said, effectively acknowledging that the statue was more pagan than Catholic.

The Vatican editorial chief recommended that the “new iconoclasts,” whom he said had “passed from hatred on social media to action,” read the following passage from the newly canonized St. John Henry Newman’s Essay on the Development of Christian Doctrine:

The use of temples, and these dedicated to particular saints, and ornamented on occasions with branches of trees, incense, lamps and candles; votive offerings on recovery from illness; holy water, asylums; holy days and seasons, use of calendars, processions, blessings on the fields, sacerdotal vestments, the tonsure, the ring in marriage, turning to the east, images at a later date, perhaps the ecclesiastical chant, and the Kyrie Eleison, are all of pagan origin, and sanctified by their adoption into the church.

But in comments to LifeSite, British historian and theologian Dr. Alan Fimister, an assistant professor of theology at St. John Vianney Seminary in Denver, suggested that Tornielli’s understanding of Newman is considerably flawed.

The British historian’s comments have been echoed by Luis Badilla, editor of the Vatican’s semi-official news aggregator, Il Sismografo. The rift between Tornielli and Badilla over the Newman passage further highlights the Vatican’s uncertainty about how to deal with the aquatic disposal of the “pachamamas.”

A brief glance at history reveals that there is historical precedent for destroying pagan idols and even hurling them downriver to their demise.

St. Vladimir the Great, the Prince of Kiev and founder of Ukrainian, Russian and Belarusian Christianity, threw the pagan idols of the Rus into the river Dnieper, before having his people baptized in its waters.

Coifi, the pagan high priest of the King of Northumbria, when he became convinced of the truth of Christianity, rode a stallion into his own temple and smashed it to pieces.

The story is recorded by St. Bede, who also tells of St. Gregory the Great’s letter to St. Augustine of Canterbury, in which he writes that if one can find locations, festival days and harmless folk traditions which are not per se related to idolatry, there is no need to suppress them. Encourage the people to be uncompromising in their rejection of idolatry, St. Gregory said, but one doesn’t need to destroy things that are not in themselves connected to idolatry.

The introduction of clearly pagan elements into ostensibly Christian worship in order to undermine a people’s adherence to Christianity was certainly a technique employed by the German Christians in the 1930s, when they were looking for a form of Christianity more acceptable to Nazism.

Andrea Tornielli branded the men who hurled the controversial Amazon Synod statue into the Tiber as the “new iconoclasts.”

Historically, the iconoclasts claimed that the depiction of Our Lord, the Blessed Mother and the saints was idolatrous. But the controversial Amazon Synod statue is officially not a depiction of the Blessed Mother at all, yet in the eyes of many ordinary Catholics was given the worship of obsequium (bowing on both knees) at the Oct. 4 Vatican gardens ceremony.

Both the iconoclasts and the iconodules (who believed one can worship Our Lord and venerate the saints through an image as long this  honors them through the image) would have been very clear that bowing to a pagan statue is idolatrous.