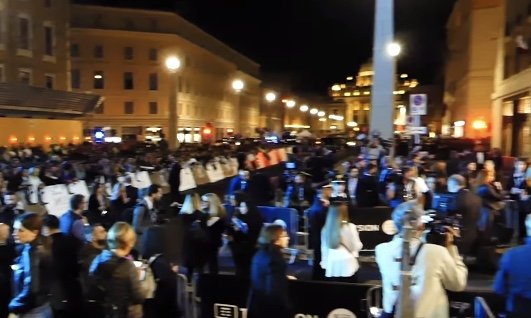 The European première of Maleficent, Mistress of Evil took place at an new auditorium not far from St Peter's Basilica.

ROME, October 11, 2019 (LifeSiteNews) — We now know a bit more about what happened after the pagan ceremony of the “Pago à la tierra” (“Payment to the Earth”) in the Vatican gardens under Pope Francis’ very eyes.

The next evening, on Saturday, October 5, the group of “indigenous” Amazonians — wearing feathers, t-shirts and trendy sports shoes — and their friends went to the church of Santa Maria in Traspontina in the middle of the Via della Conciliazione for a prayer vigil for the Synod on the Amazon, which opened the next day.

But that was not the only noteworthy event on the Via della Conciliazione that leads from the Castel Sant’Angelo and the Tiber to St. Peter’s Basilica. On Monday, October 7, the European “première” of Maleficent, Mistress of Evil took place in the new gigantic auditorium that is situated at its base, covering the large “Via” with fans wearing the evil Queen’s horned headdress.

One event was religious, the other very obviously secular, but their common denominator was confusion about the nature of good and evil, truth and error.

At Santa Maria in Traspontina, the multi-colored blanket used in the Vatican garden was deployed at the foot of the altar, which was itself covered by a hand-crafted net; other rainbow nets were visible in the sanctuary. A ritual to the Pachamama – “Mother Earth” – was once more celebrated after the objects that had strewn it in the Vatican gardens were brought in procession-wise and reverently placed on the blanket, together with ritual dancing.

The objects included at least one of the two wooden figurines of naked pregnant women crouching, seen the day before in the Vatican gardens, either a pagan fertility symbol or a nude “Our Lady of the Amazon” of which LifeSiteNews’ John-Henry Westen said in a video published Friday that he “frankly did not know which was worse” because “either way, it was totally outrageous.”

A slender young woman dressed in tight pants was then borne through the aisle toward the blanket in a model wooden boat, carried by native Amazonians.

The film of the event published by REPAM (the Pan-Amazonian network presided over by Cardinal Claudio Hummes, who is also a key organizer of the Synod) then shows the group prostrated around the blanket, with what is probably the Blessed Sacrament in the background. At any rate, the candles on the high altar were lit for the event and the ceremony was presided over by Cardinal Pedro Barreto, who proclaimed, “This evening, heaven is on earth.”

It was the same young woman who danced in the aisle with what appeared to be the New Testament.

In a side chapel of Santa Maria in Traspontina a poster had been placed to show that “everything is connected” (Laudato sì). Here, it was a photo of a small mammal connected to the breast of a naked indigenous woman sucking it while she carried a child on her other arm.

The photo was explained in three parts linked by arrows, starting from “Yo” (“I”) and leading to “Otro-Yo”: “Another I,” the child.

Is this to show that the indigenous are elements of a community that justifies forgetting the difference between “I” and “you”? Another arrow led to “Otro Naturaleza Cosmo” (“Other, Nature, Cosmos”) represented by trans-species suckling.

The church was also decorated with portraits of “martyrs” such as Xicão Xukuru, leader of the Xukuru do Ororubá in Pernambuco, who sought to revive ancient rituals that had disappeared “because of white man,” and who was killed.

We now have an even clearer idea of what the creation of a new liturgy of the “Amazonian rite” evoked on the first day of the synod's discussions, Monday, October 7, would look like. If the ceremony to the Pachamama in the Vatican gardens was a foretaste, Santa Maria in Traspontina felt like a more advanced experiment, with women in the main roles, of course.

All were invited to join hands or raise them to heaven to sing the “Our Father of Martyrs” (indigenous people “martyred” by white men in the Amazon, not martyrs of the faith).

Here is the translation:

“Our Father, of the marginalized poor,

Hallowed be your name among those who die defending life.

Your name is glorified when justice is our measure.

Your kingdom is a kingdom of freedom, fraternity, peace and communion.

Cursed be the violence that devours life through repression …

“We want to do your will, you are the true God of deliverance …

We will not follow doctrines corrupted by oppressive power …

The bread that brings humanity, that builds man rather than cannons …

“Forgive us when, out of fear, we remain silent in the face of death …

Forgive, and destroy kingdoms where corruption is the strongest law.

Protect us from cruelty, from the death squad, from the empire …

“Our Father, of the marginalized poor,

Our Father, of the martyrs and the tortured … ”

Maleficent on the Via della Conciliazione

Faithful Catholics may be becoming hypersensitive to the worrisome information coming from Rome. But how could we not be struck by the holding of the European première of the latest Disney film, Maleficent, the Mistress of Evil on the Via della Conciliazione in the shadow of St. Peter's in Rome, on Monday, October 7, just one day after the official opening of the Synod on Amazonia?

All the more so because the sequel to the 2014 Disney film Maleficent, a re-reading of Sleeping Beauty from the point of view of the wicked godmother, was originally scheduled for release in the spring of 2020. …

The film was premiered six months in advance in a place and at a time that could not be more symbolic, with St. Peter’s Basilica clearly visible in the background. The gala première was held in the presence of Angelina Jolie – “Maleficent” – and Michelle Pfeiffer, who played “Queen Ingrith,” mother of “Princess Aurora,” whose upcoming marriage with “Prince Philip” stirred up a new enmity between the two women in this sequel.

A large crowd had gathered to see the two stars arrive triumphantly at the auditorium. Many onlookers were wearing the horns characteristic of the evil godmother. In the original tale of Sleeping Beauty, she was the embodiment of evil. But Maleficent 1 had already explained in 2014 that the wicked godmother had suffered a lot and that she had good sides to her.

Critics have already saluted the sequel as a very “feminist” film, concerned with “diversity” and the environment. Maleficent stages both the opposition between the two women and their alliance.

“The film continues to explore the complex relationships between the witch and the future queen, as they forge new alliances and confront new adversaries in their struggle to protect their lands and the magical creatures that inhabit them.”

Good and evil no longer clash. They cooperate to save the earth and biodiversity. This is the message. Perhaps it is also a sign, when 48 hours earlier Catholic Indians were prostrating themselves 120 meters from there in front of pagan statuettes in a church where Our Lord is present in the most Holy Eucharist.