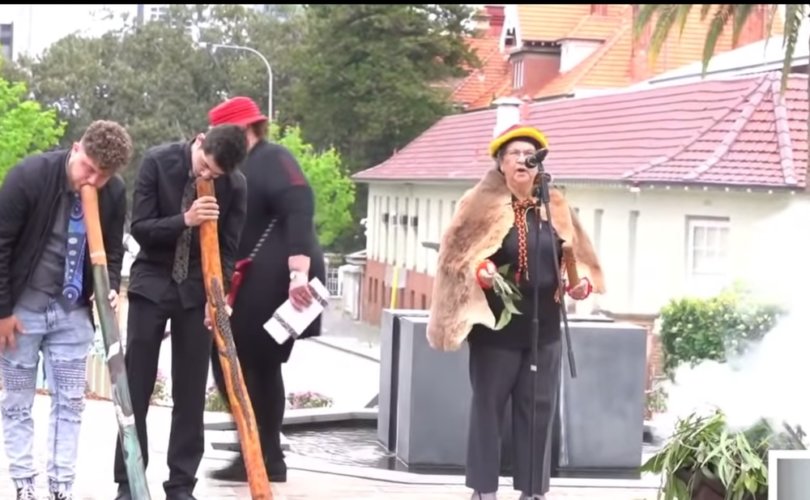 PERTH, Australia (LifeSiteNews) — A meeting of leaders of the Catholic Church in Australia began with a non-Christian ceremony that had the blessing of the Archbishop of Perth.

On October 3, some Australian Catholics were shocked  the ritual that took place immediately before the 5th Australian Plenary Council’s Opening Mass in St. Mary’s Cathedral, a “smoking ceremony” to drive away “spirits,” as Archbishop Timothy Costelloe SDB looked on in approval.

The popular “Welcome to Country” ritual began outside the cathedral as an Indigenous Elder, unnamed in the official program, explained the purpose of the ceremony was “to cleanse the bad spirits away from the area.”

“On this plenary council day, we’re going to try and drive the bad spirits away,” he said.

The Elder then cut pieces of eucalyptus branches and leaves into a bonfire, sending large plumes of grey smoke across the “sacred space” as a server dressed in a white Roman alb, holding a thurible, looked on in confusion.

As this Elder continued to stoke the fire, his female counterpart, also unnamed in the program, stepped to the microphone and explained, “As part of the smoking ceremony, we invite you all to come and walk through the smoke, wash yourself with the smoke.”

She added, “Don’t be afraid. It’s part of an old ceremony and tradition.”

This Elder then began chanting in her native language. This chant was accompanied by an ensemble of didgeridoos and tapping sticks to enhance the spiritual significance, for Indigenous practitioners, of the ritual.

“Come, good spirits, and be with us this day,” she added.

A steady stream of people began walking through the smoke to become ritually cleansed. This included the confused server, followed by the concelebrating priests and finally, Archbishop Timothy Costelloe.

The chanting Indigenous Elder then led a procession into the church, waving one of the smoking branches from the sacred bonfire. The Archbishop and concelebrating priests followed her into the desecrated church to the sound of didgeridoos, and waited at the foot of the altar as the Indigenous elder continued waving her branch to dispel the “spirits” from the Catholic Church.

Standing in the sanctuary, the Elder then welcomed the people “to the ancient land, whose heritage, traditions and customs and language is still practiced today” and offered a formal welcome in both the language of the Noongar people and English.

“The Aboriginal custodians welcome you all here to the land of the people of many breasts,” she said.

“This is crow and cockatoo dreaming land whose families and ancestors tread the grounds, leaving footprints upon the land where their spirit lingers on, surrounding us through stories as we listen, look, learn, talk and later on we will celebrate.”

The Indigenous elder then concluded the ritual with the Noongar gesture of peace and descended the altar for the formal commencement of the contemporary Catholic liturgy.

— Article continues below Petition —
SIGN: Show Pope Francis the Latin Mass will survive any suppression
Show Petition Text
36523 have signed the petition.
Let's get to 40000!
Thank you for signing this petition!
Add your signature:
Show Petition Text

As Plenary Council President and Archbishop of Perth, Costelloe stated, “We can be confident that the Lord remains faithful to this promise. And so, as we now seek to discern just what it is that God is asking of us in Australia at this time, our hearts do not need to be troubled or afraid.”

“We have not been called to advance any particular agenda, be it our own or someone else’s. We have been called to enter into a sacred space, as brothers and sisters in Christ, to listen deeply for the voice and to be alert to the leadings of the Holy Spirit.”

At the conclusion to his homily, Archbishop Costelloe stated, without irony, “As we solemnly inaugurate the first Assembly of the Plenary Council today, I want to be so bold as to say, therefore, that perhaps the most important thing God is asking of us at this time is to return the Church to Christ and return Christ to the Church.”

The Plenary Council is a formal gathering of both religious and lay representatives to promote “dialogue about the future of the Catholic Church in Australia”. This is to be accomplished through “Listening and Dialogue”, “The National Themes for Discernment,” and “Listening and Discernment”.

The Australian Catholic Church Plenary Council is an opportunity for major reform – praying that people listen to the Spirit speaking, especially through each other. Opening Mass online 2pm for those in Melbourne. #Catholic #CatholicEducation https://t.co/3L4fDBpZva

This desire to promote dialogue, listening and discernment has been heavily criticized by concerned Catholics as an attempt to promote progressive reforms, including neopagan syncretism in the liturgy, into the Catholic Church. This concern was stoked by the Council’s instrumentum laboris, or working document, which promotes pagan practices such as “dadirri” as a form of contemplative prayer. Dadirri is a form of pagan meditation leading to dialogue with “the spirit” and has been referred to as the “guide” of the 5th Plenary Council.

The Council will conclude on October 10.

Some critics of the decision to hold a pagan smoking ceremony before the 5th Plenary Council’s Opening Mass have compared it to the scandal that broke out during the 2019 Synod of Bishops for the Pan-Amazon Region. During that October meeting, a wooden image identified with the Andean fertility goddess “Pachamama” was venerated and paraded into Saint Peter’s Basilica.