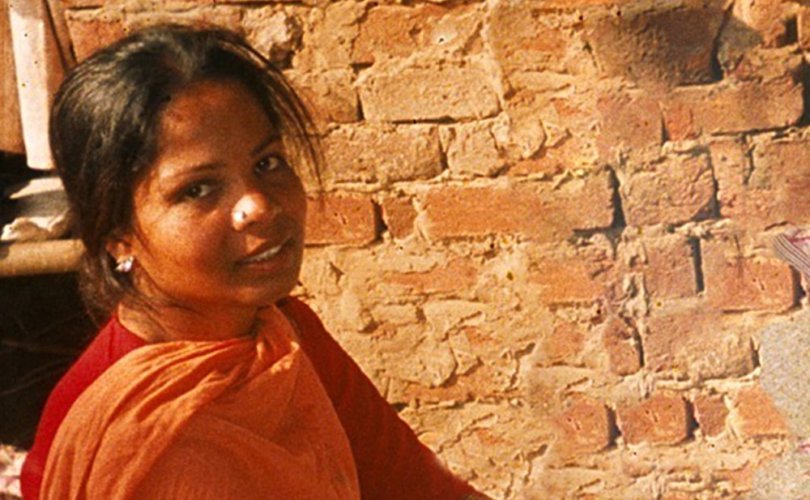 OTTAWA, May 8, 2019 (LifeSiteNews) — Asia Bibi, a Christian woman who was sentenced to death in Pakistan for violating Muslim law, has arrived in Canada in the hope of starting a new life.

After spending years on death row in her native Pakistan, Asia Bibi (aka Asia Noreen) may spend the rest of her life looking over her shoulder despite finding refuge in Canada. Muslims have sworn to kill her despite being acquitted of charges of violating Pakistan’s laws barring blasphemy. She was sentenced to death in 2010 after being accused of blasphemy under Pakistani religious law following a dispute with two Muslim women in her village over a cup of water. According to Bibi’s accusers, Muslim sharia law forbids Christians from using the same eating and drinking utensils used by Muslims.

This is great news for Asia Bibi, who can hopefully live a peaceful life free of threats and imprisonment now. But there will continue to be more people suffering like she has while mobs and governments seek to punish the bogus “crime” of blasphemy.

Bibi told her persecutor, “I believe in my religion and in Jesus Christ, who died on the cross for the sins of mankind. What did your Prophet Muhammad ever do to save mankind?” For these remarks, Bibi was beaten by her Muslim neighbors who had pursued her home. Police arrived to arrest her and take her into custody, pending trial. Once convicted, she faced possible hanging, which is the prescribed death for blasphemers in Pakistan. While no one has been hung for blasphemy yet in modern Pakistan, many of the accused have died at the hands of enraged Muslim mobs.

Bibi’s case soon garnered the attention of the world, gaining support from Pope Benedict XVI and Pope Francis, as well as various Christian groups around the world. When they called for Bibi’s release, Salman Taseer, a Pakistani Muslim politician, and Clement Shahbaz Bhatti, a Catholic who was serving as Pakistan’s Minister for Minority Affairs, were murdered on orders of Muslim militant groups.

Today, as Asia Bibi, Christian mother of 5 sentenced to death for 'Blasphemy', is finally free & out of Pakistan, we remember the heroes who were murdered for defending her & opposing this cruel law: Shahbaz Bhatti, Minister of Minorities, and Salmaan Taseer, Governor of Punjab. pic.twitter.com/bcJMkpYLvo

U.S. Secretary of State Mike Pompeo extended best wishes to Bibi, saying in a statement that she has been “safely reunited with her family.” International attention forced the hand of Pakistani authorities to secure Bibi’s departure.

Canadian Prime Minister Justin Trudeau said in November 2018 that negotiations were afoot to bring Bibi to Canada. Confirming that Bibi’s husband, Ashiq Masih, had begged for asylum in Canada, United Kingdom, or the United States, Trudeau said Pakistan was “very dangerous” for him and his family. Recently, Pakistani Prime Minister Imran Khan told the BBC that Bibi would soon leave Pakistan.

In October 2018, the supreme court of Pakistan overturned Bibi’s conviction and she was eventually released from prison. Violent protests, led by the Islamic group Tehreek-e-Labbaik, broke out across Pakistan as Muslims called for the murder of the judges of the high court. Meanwhile, Bibi and her family were taken into protective custody. In hiding, she and her family were hunted down by Muslim extremists who went on a house-to-house search for her. While she remained in custody, two of Bibi’s daughters preceded her to refuge in Canada.

Bibi’s lawyer, Saiful Malook, and his family fled Pakistan fearing for their lives after her acquittal. According to Fr. Raymond J. DeSouza, a Canadian Catholic priest and columnist, 10 million Pakistani Muslims stand ready to kill Bibi for a reward, which has been offered by a Muslim religious leader.

#AsiaBibi is FINALLY out of Pakistan!!! Praise God Almighty!!!! https://t.co/iJpSaKInop

Currently, Bibi’s whereabouts in Canada are unknown. There are reports that she may be provided with a new identity while authorities find a new home for Bibi and family. Canadian authorities are expected to protect her and members of her family. The Catholic Church is also expected to provide a welcome to her, even while there are fears that churches may in turn become targets for Muslim terrorism. Prime Minister Justin Trudeau refused comment on May 8.

According to the CIA Factbook, Christians and Hindus together constitute but 3.6 percent of Pakistan’s 200 million people. The majority, however, of persons accused of blasphemy are non-Muslims. Hindus constitute the largest minority group in Pakistan, which broke away from India in the late 1940s.

According to Open Doors, Christians are especially targeted by Pakistan’s sharia blasphemy laws. The group, which advocates for religious freedom, stated, “Under Pakistan’s notorious blasphemy laws, Christian persecution is a growing problem and Christians continue to live in daily fear that they will be accused of blasphemy — which can carry a penalty of death. Additionally, radical Islamists seem to be gaining more political power, and the new ruling government must maintain good diplomatic relationships with some radical groups. Christians are largely regarded as second-class citizens, and conversion to Christianity from Islam carries a great deal of risk.”