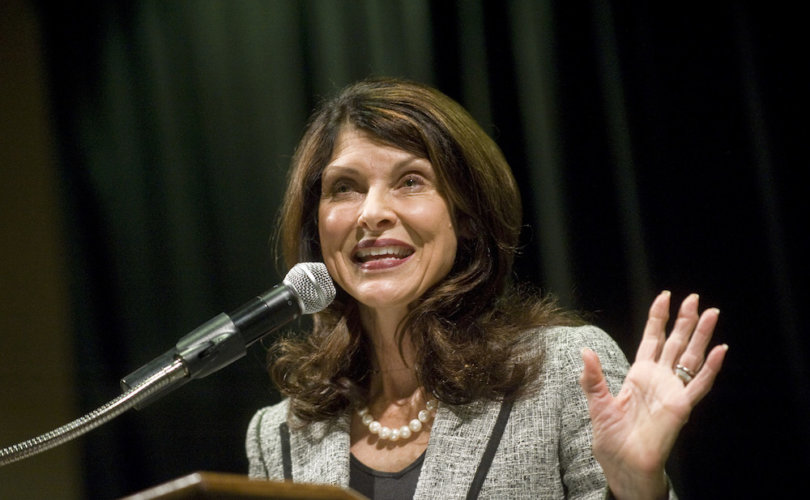 WASHINGTON, D.C., January 31, 2017 (LifeSiteNews) – Millions of children have lost their lives since abortion was made legal in 1973 in the US. Tim Tebow could have been one of them.

Thirty years ago, a doctor told his mother, Pam, to abort because there were complications with the pregnancy that endangered her health. The physician said the baby was similar to a tumor – which is to say, not a person – that should be removed. Like the unborn child was a disease.

She and her husband, both Christian missionaries, never hesitated to choose life.

If they had aborted, the world would have been denied a Heisman Trophy winner and a sports personality who has inspired millions with his faith and his witness for life.

Pam Tebow came to the 23rd annual National Memorial for the Pre-Born and their Mothers and Fathers at DAR Constitution Hall that preceded Friday's March for Life to receive the National Pro-Life Recognition Award and to share her story. She has told it countless times to groups around the country, but she never tires of spreading the gospel of life because it's a “God story.”

For the Tebows, this “God story” started in the Philippines, where they were working as missionaries. Pam's husband, involved in the pro-life movement before leaving America, became overwhelmed thinking about all the babies lost to abortion. He prayed for guidance and made this request to God, “Lord, if you give us a son, we'll raise him to be a preacher.”

Pam was blessed to become pregnant but began bleeding almost from the start. Knowing the poor medical offered in the Philippines, they were concerned but never wavered in spite of her doctor pushing for an abortion.

“She said, 'You know, it's not really a baby. It's a mass of fetal tissue. It's a tumor,” Tebow said. “She advised me that I needed to abort and abort immediately in order to spare my life.”

“Well, we chose to trust God. At the time, it didn't seem like a courageous choice. It was the only thing that we knew to do and we wanted to trust God with that little boy we had prayed for.”

The bleeding eventually abated and the family traveled to the capital city of Manila, where Tim was born. An American-trained doctor saved both of their lives.

Tim was somewhat malnourished at birth and so “we asked for all of our family to pray that he would become big and strong.”

God definitely answered their prayers in a big way.

“Timmy the tumor,” as his siblings teasingly called him as a little boy, grew into a strapping 6-foot-3, 245-pound quarterback who went on to star at the University of Florida, where he won the Heisman, college football's top award, as a sophomore.

That's when Tebow's life journey started to gain national attention. During an interview with ESPN as one of the Heisman finalists, he shared his pro-life story — and the sports network surprisingly aired it.

“That gave us an instant testimony,” Pam said.

A few years later, the Tebows decided to spread the message to an even bigger audience with a 30-second commercial during the Super Bowl that became a lightning rod for controversy because of its pro-life message.

“We told him, if you do this commercial, you know you'll be persecuted,” Pam said. “He said, that's OK, this is my story and I want to share it. So he did and all his sponsors dropped him. But it was worth it.”

How worth it? It's estimated that five million people worldwide changed their stance on abortion because of a commercial that showed a mother's life-giving love for her son — and that all life is sacred.

The Tebows have never shied away from speaking about their Christian faith. Tim became known in college for wearing Bible verses and for a phenomenon known as “Tebow-ing,” when he knelt in prayer in the end zone after a touchdown.

Millions of fans embraced him, but the media persecuted him for wearing his faith on his sleeve. Sports is somewhat similar to politics in that the maintain press generally doesn't cotton to religious references or outward displays of faith.

Tim had a brief run in the NFL, highlighted by helping the Denver Broncos reach the AFC championship game in 2011, before moving into broadcasting. He is currently taking a stab at professional baseball with the New York Mets' organization.

And he and his family continue to touch lives. In Tim's book, “Shaken,” he talks about meeting some of the women who changed their minds and had their babies. Pam continually encounters women that made the life-changing choice.

She remembered one woman in particular who came up to her after a talk and said, “Mrs. Tebow, I didn't abort my baby because you didn't. And I was hooked forever (to work to save the unborn). It's a God story that honors God.”

The Tebows' other children are “all in” as crusaders for life, including a daughter who spreads pro-life material as a missionary in a country where the unborn child is considered nothing but a mass of blood vessels.

Pam then looked at the assembled crowd at the prayer service and passionately proclaimed, “It takes a team. It takes all of us, doesn't it, to take a stand for life.”