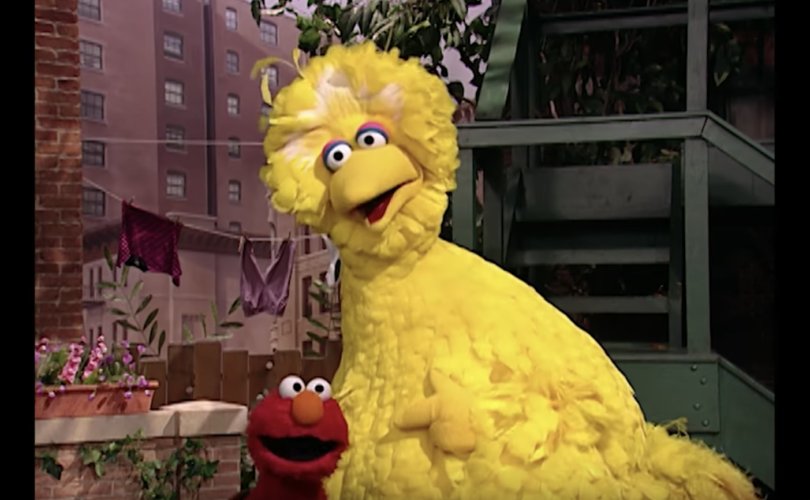 September 17, 2018 (LifeSiteNews) – Pampers is facing questions over whether it has decided Oscar the Grouch, Big Bird, Cookie Monster, Elmo, and the rest of the gang are too masculine to feature on its diapers.

According to the The New York Post, parents accustomed to the Sesame Street characters appearing on their babies’ nappies have been disturbed to find generic figures in their place. They feared the diapers were fakes, which goes to show how successful the 15-year partnership between Pampers and Sesame Street has been: in some parents’ minds, one now implies the other.

One parent was so annoyed that she made a complaint and says a representative from Pampers told her that the reason for the switch was gender-based.

“The Pampers rep said … parents who have daughters thought that the ‘Sesame Street’ characters are too masculine,” mom Susie Wong-Benjamin told the New York Post.

“We talk to thousands of parents every year to understand how our diapers are best meeting their babies’ needs and any new trends they might be interested in,” stated Laura Dressman. “We learned there was a growing desire from Moms and Dads for modern, fresh graphics.”

But when the Post asked Sesame Street why their characters had disappeared from Pampers’ diapers, a spokeswoman sent them a link to a press release about Pamper’s “current support for our gender equality work.”

“The link was to a year-old press release titled ‘P&G [Proctor and Gamble] and Sesame Street partner to promote gender equality,” which highlighted the female character Chamki, “a vibrant, 5-year-old Muppet” who is featured in the Indian version of “Sesame Street,” the Post reported.

The Pampers spokeswoman then went on call the Post story “inaccurate.”

“As a proud partner of Sesame Street for over 15 years, we love featuring Sesame Street’s iconic characters on our Pampers Baby Dry diapers,” Dressman told PEOPLE. In that statement, she said Pampers has “always included a range of Sesame’s characters — male and female (although we know from research that children love the characters equally). This includes Elmo, Zoe, Cookie, Rosita, Big Bid, and Oscar among others.”

However, the removal of Sesame Street characters from their children’s diapers, for whatever reason, may be a plus for some parents.

“I wasn’t interested in getting [my daughter] Yvonne into Sesame Street because of the creepy ideological stuff,” mom Colleen Fimister told LifeSiteNews.

In his book Primetime Propaganda, columnist Ben Shapiro cited Sesame Street as one of the TV shows that has a not-so-subtle left-wing bias.

At three years old, Yvonne is Sesame Street’s target market, but she won’t be watching.

Not to be left behind in the craze for all things LGBT, Pampers has hired a celebrated same-sex couple to be its brand ambassador in the UK. Olympian diver Tom Daley and his partner Dustin Lance Black, an American film director andLGBT activist, employed a surrogate to produce their son Robby Ray. The name of the Pampers range the men are promoting is called “Pure Protection.”