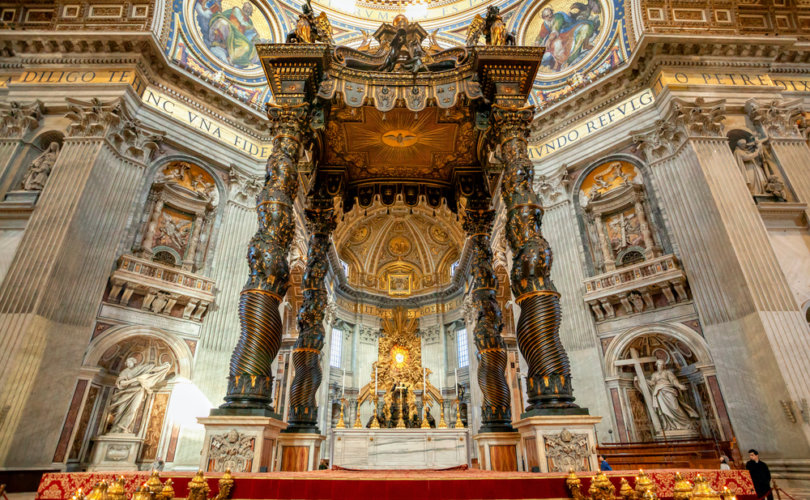 VATICAN CITY (LifeSiteNews) – In what is being decried as another attempt to “deface” the Catholic Church’s traditions, Pope Francis has given permission for a priest to say Mass on the high altar in St Peter’s Basilica.

Hitherto the altar usually has been reserved for the Pope alone, even under pain of excommunication.

The Italian news outlet Il Messaggero reported recently how the “revolution” of Pope Francis in the Catholic Church has now led to the abrogation of the tradition of reserving the papal altar in the Vatican solely for the Pontiff.

“As a result of the revolution started by Pope Francis in the heart of Christianity, for the first time a simple priest – the biblical scholar Fabio Rosini – will celebrate Mass at the central altar, under Bernini’s Baldacchino, which for centuries was reserved only for Popes,” wrote Franca Giansoldati for Il Messaggero.

The high altar, or the Altar of the Confessio, is the centerpiece of St. Peter’s Basilica, surmounted by the baldacchino made by Gian Lorenzo Bernini. Consecrated by Pope Clement VIII in 1594, it is situated on top of the tomb of St. Peter himself, which is found below the cathedral. The “Confessio”  refers to St. Peter’s confession, or declaration, of faith in Jesus Christ.

Traditionally, the altar has been reserved for the use of the Pope alone, with very rare exceptions made, as noted by Father John Zuhlsdorf, who reminded his readers: “anyone who dared to use the papal altar in one of the major Roman basilicas without a rescript incurred an excommunication, including cardinals.”

“This has never happened before,” added the popular priest.

The news was broken on Constanza Miriano’s blog, where she announced an October 2 pilgrimage to the Vatican for the “Wifi Monastery” group. The group – consisting of “people who want to live their baptism seriously and who are looking for help to live their faith more deeply and faithfully in their daily lives, with a united heart” – is holding a day of prayer and catechesis in the Vatican.

The Mass at the Papal Altar is to be the focal point of the day, and will be offered by Father Fabio Rosini, the Director of Vocations for the Vicariate of Rome, a Scripture scholar, and a frequent guest on Vatican Radio.

Miriano’s blog stated: “Mass will then be celebrated by Fr Fabio Rosini (the first time in the history of the Church that a ‘simple’ priest will celebrate on that altar above the tomb of St Peter): all priests who wish to concelebrate let us know, the vestments are available in the sacristy.”

LifeSiteNews spoke with Thomistic theologian and liturgy expert, Dr. Peter Kwasniewski, who explained the import of allowing minor clergy to celebrate on the Papal Altar.

“It is another ‘taboo’ that Francis wants to violate publicly, another ‘line’ he wants to cross in his enterprise of canceling all traditions,” he continued.

“Revolutionaries have to destroy any vestige of the sacred, the set-apart, the privileged, the untouchable, the elevated, the off-limits.”

Describing it as a “cancel culture move,”  Kwasniewski suggested that the decision to “deface this tradition” was an attempt to “lessen the mystique, the aura, the appearance of something fixed and unchanging.”

“It’s what we saw in the family synods, the youth synod, and the Amazon synod: continual transgressions of boundaries, to clear the way for perpetual change, for assimilation into modernity, which is identified with Absolute Spirit in a Hegelian sense: it is where humanity is destined to go, so the Church must shatter any customs of the past that might suggest that she is either ancient or timeless or embraces all ages without essentially changing.”

— Article continues below Petition —
SIGN: Show Pope Francis the Latin Mass will survive any suppression
Show Petition Text
36479 have signed the petition.
Let's get to 40000!
Thank you for signing this petition!
Add your signature:
Show Petition Text

Altar of the Pachamama

The Papal Altar is also the altar upon which was placed, at Pope Francis’s direction during the closing Mass of the Amazon Synod on October 27, 2019, a bowl of plants later associated with the false goddess Pachamama.

“Many saw in this bowl an occult sign, an offering to a demon, that was scandalously placed on God’s altar on which the Pope offers the Holy Sacrifice of the Mass,” wrote LifeSiteNews’ Maike Hickson.

Hickson also noted how even in late 2020, the altar had not been used for Mass since the Amazon Synod, and the infamous honoring of Pachamama statues. The absence of any Mass at the altar since the Synod was described by Professor Armin Schwibach, a Vatican Correspondent who has lived in Rome for more than three decades, as a “symbolic emptiness.”

Kwasniewski had similar thoughts regarding the current non-Papal use of the Papal Altar, telling LifeSiteNews that he sees “the significance here as one of undermining symbols and offices. Destabilization for the sake of ‘the God of surprises’.”

Regarding the landmark permission for use of the altar, Il Messaggero noted that it was “part of a long trail of radical changes in the use of St Peter’s Basilica that began with a series of regulatory measures that led, among other things, to a ban on Latin Masses, allowing only one celebration per day in the language of Cicero in the Vatican grottoes early in the morning.”

Indeed, Pope Francis has made a number of significant changes to the liturgy both in the Vatican and worldwide, in recent months.

On March 12, the Vatican issued a stringent directive regarding private Masses and Traditional Latin Masses in St. Peter’s Basilica. Private Masses were abruptly “canceled,” Masses limited to concelebration at set altars between the hours of 7 and 9 a.m., and celebration of the Extraordinary Form (or Traditional Latin Mass) limited to a small altar in the crypt, also between the hours of 7 to 9 a.m.

Then in June of this year, the Vatican’s Cardinal Archpriest Cardinal Mauro Gambetti, O.F.M, wrote on behalf of the Pope to order that Mass in the Vatican be celebrated only in Italian, with the readings and prayers of the faithful permitted to be said in “various modern languages.”

Just weeks later, Pope Francis issued his motu proprio Traditionis Custodes, severely restricting the Traditional Latin Mass throughout the world and declaring that the liturgy of Paul VI, or the Novus Ordo, is the “unique expression of the lex orandi of the Roman Rite.” The document rejected Pope Benedict XVI’s landmark 2007 document Summorum Pontificum, which freed all priests who wished to celebrate the ancient form of the Mass to do so, and instead required priests to request permission to say the Traditional Mass. It also instructed bishops to severely limit the presence of the Mass, as a sign of unity with the Pope.

Brian McCall, editor-in-chief of Catholic Family News, told LifeSiteNews at the time that the document was “an unjust law and therefore no law at all. It is an act of violence. (See St. Thomas Summa Theologiae I-II Q. 96 Ar. 4). It exceeds the authority of the lawgiver (as even Benedict XVI admitted in 2007) and is contrary to the common good. It utterly fails as a law.”