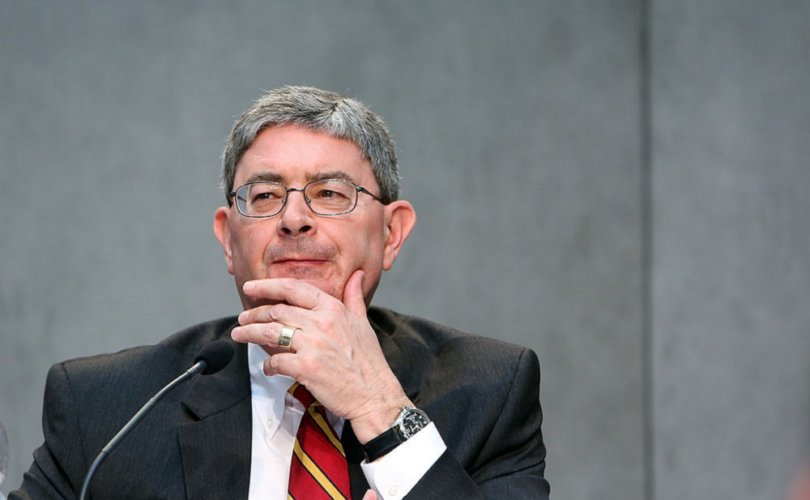 Smith turned to social media yesterday to critique a column by author and papal biographer Weigel that appeared in the National Catholic Register on December 31 and in First Things on January 1. In his column, Weigel suggested that for 2020, readers “resolve to limit [their] exposure to the Catholic blogosphere.”

In his “New Year’s Resolutions for Concerned Catholics: A Few Suggestions,” Weigel wrote:

In 2019, many Catholic websites went bonkers. There is no need to click on sites that specialize in all-hysteria or all-propaganda all-the-time. If you want reliable Catholic news, visit the websites of Catholic News Agency and the National Catholic Register. If you want sane commentary on the turbulent Catholic scene, go to the websites of Catholic World Report, First Things and The Catholic Thing. That’s more than enough for anyone. Limiting your blogosphere browsing to these sites, while ignoring the hysteria-mongers and propagandists, will lower your blood pressure while keeping you well-informed.

Smith, however, stated that this advice contains both “short-sightedness and even foolishness.”

“Weigel recommends a limited number of news services that Catholics should consult and warns people against others,” the retired seminary professor wrote on Facebook. “While many don’t like the tone of some sources, several of these are responsible for much of what we know about the corruption in the Church and their persistence has been invaluable in achieving the few successes there have been.”

“[D]on’t blame the messenger in respect to the news sources that investigate and report upon events that the others eventually report, somewhat less sensationally,” she advised.

“Remember that the news being reported is in itself sensational and some reporters have a flair for highlighting just how outrageous is ‘news’ that is no longer news.”

The philosopher mourned that some Catholics have “become inured to scandal in the Church” and praise bishops “for minimally doing their jobs” while being more reluctant to “rebuke those who continue to engage in cover up and tolerance of corruption” in their dioceses. She believes that hard-hitting news outlets are necessary for cleaning up the Church.

“The Church rather desperately needs news outlets that realize that ‘business as usual’ is not an option when the corruption is so pervasive,” she wrote.

“I am all for reporting good news and having hope and providing just and balanced treatment of all people and issues, but I think it unwise and unfair to try to marginalize those who have been and are in the forefront of exposing corruption,” she continued.

“[W]hen the history is written of this period, some of what are now considered to be extreme and fringe outfits will be lauded as heroes.”

Smith then employed the term “muckraker,” first used to describe American journalists of the late 19th and early 20th centuries who exposed the terrible working and living conditions of the American urban poor. Invented by President Theodore Roosevelt, the word “muckraker” or “muck-raker” was a badge worn with pride by such reporters as Upton Sinclair.

“Muck-rakers are rarely ‘balanced’ but they often expose corruption that other ‘more respectable’ reporters and analysts won't for fear of seeming sensationalist or alarmist,” Smith wrote. “It is hard to clean up the dirt without getting a bit dirty.”

Church Militant republished Complicit Clergy’s praise of the scholar for her defense.

“If it were left up to Weigel’s ‘reliable’ news outlets,” the piece read, “it is likely we would have largely remained in the dark about the Church’s sex abuse and financial scandals. These outlets are beholden to the bishops. While they are now covering the scandals, they were largely forced to by the new Catholic media outlets.”

Christine Niles of Church Militant told LifeSiteNews that Weigel’s remarks were “insulting in the extreme.” “Weigel’s derogatory characterization of authentic journalists as ‘propagandists’ — people who’ve stuck their necks out, sometimes at the cost of their careers and even at times their safety, to expose corruption in the hierarchy, all while establishment media maintained a safe and comfortable silence — is insulting in the extreme, and makes his comments not worth taking seriously,” Niles said.

“George Weigel’s admonishment that in 2020 people should avoid Catholic websites ‘that specialize in all-hysteria or all-propaganda all-the-time’ while sticking to the safety of establishment Catholic publications is stunningly tone-deaf,” Skojec said, “particularly for a man who admitted during an interview with Raymond Arroyo that [Archbishop Carlo Maria] Viganò had personally told him about the allegations that [disgraced ex-cardinal Theodore] McCarrick was under Vatican sanctions years ago, but who apparently never reported on this until after Viganò had to go into hiding for his testimony about the McCarrick cover-up.”

“People have turned to alternative Catholic media precisely because establishment publications ― and establishment Catholic writers like Weigel ― were failing to adequately expose or cover the very ‘disturbing’ ecclesiastical revelations Weigel concedes we'll be hearing more about in the coming year,” Skojec continued.

Skojec noted that it was alternative Catholic media that “pushed through the barrier of silence that had become the status quo” and made examination of Vatican and episcopal corruption “part of the daily Catholic conversation.”

“It was alternative Catholic media that forced establishment publications to allow such stories to run because everyone was already talking about them,” he added.

“It is precisely because alternative Catholic media aren’t beholden to bishops or bishops’ conferences or other insider influences that they have the freedom to address stories that would have traditionally been seen as untouchable.”

Whereas the remarks made by readers in the comments box of First Things indicated a willingness to take Weigel’s advice, most commentators at National Catholic Register were indignant at the idea of limiting their reading to Weigel’s list.