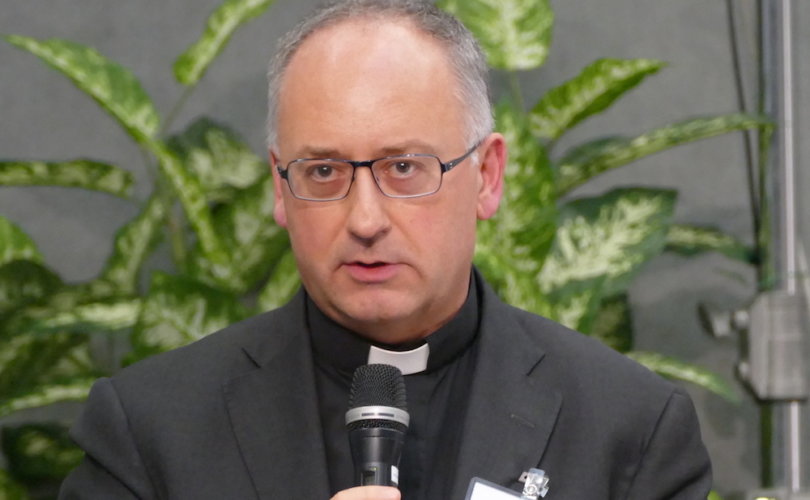 The Youth Synod is not a place for debate, Spadaro told reporters covering the Synod Friday. Rather it should be “a spiritual place, not a place of debate of opinions.”

LifeSiteNews has observed that reporters from all over the world and varying political spectrums — convened at the Vatican to cover the Youth Synod — have expressed frustration about the lack of information coming from inside the Synod hall.

In one example Philadelphia Archbishop Charles Chaput OFMCap gave a significant intervention yesterday, telling Synod Fathers that “LGBTQ” and other like language should not be used in the Vatican Youth Synod document.

“There is no such thing as an ‘LGBTQ Catholic’ or a ‘transgender Catholic’ or a ‘heterosexual Catholic,’ as if our sexual appetites defined who we are,” Chaput said, “as if these designations described discrete communities of differing but equal integrity within the real ecclesial community, the body of Jesus Christ.”

“This has never been true in the life of the Church, and is not true now,” he told the Pope, cardinals, bishops and young people gathered in the Synod hall.

Chaput’s comments are especially significant at a time when forces inside the Church and out would have Her alter or disregard Her eternal teaching on sexuality.

But there was no specific mention of his remarks at the synod press briefing Thursday.

Thomas Rosica, C.S.B., the chief executive of Salt and Light Television in Canada, and the English language media attaché to the synod, addressed journalists after the briefing, also did not mention of Chaput’s statements.

Rather, he said the session concerned the plight of migrants, the need for a listening Church, and the Church’s credibility in regard to the sex abuse.

Asked whether “homosexuality” and “gay relationships” were part of the interventions, Father Rosica responded, “Not those exact words, the issue was present, but there wasn’t any dominant issue.”

Confirming that the Church’s sexual abuse crisis was brought up in several interventions, Rosica said, “The sex abuse issue has affected young people, and they want clarity, transparency, authenticity from us.”

Spadaro suggested that releasing specifics would interfere with “discernment.”

“Something important is that the Pope said at the first extraordinary synod that the synod is not a parliament but discernment,” Spadaro said. “This is the significance of these requests.”

“In the end, discernment means that we are all together,” he continued, “and also that one is free to say what one wants, with great tranquility, knowing that what one says remains inside, because there is no real discernment if, in the end, I know that what I say will immediately go out.”

“In this case, there’s no freedom of spirit,” Spadaro said of releasing discussion specifics from inside the Synod. “[There can be freedom precisely because] you know that it is a spiritual place, not a place of debate of opinions.”

Spadaro is secretary of the synod's information commission and editor of Rome-based Jesuit magazine La Civiltà Cattolica, which is screened by the Secretariat of State prior to publication. He is often described as Pope Francis’ “mouthpiece.”

Earlier this year he tweeted support for a proposed interdict on venerable Catholic media EWTN over a segment on The World Over containing critical discussion involving a speech Spadaro gave a Georgetown University.

Spadaro has also criticized the four cardinals who raised the dubia requesting clarification from Pope Francis on Amoris Laetitia, and others who’ve questioned the pope’s document as well. Spadaro had co-authored an article charging conservative Catholics and Evangelicals in the U.S. with forming an “ecumenism of hate” in their opposition to abortion and same-sex “marriage.”

In a departure from past protocol, the Vatican is not releasing a list of the bishops who speak during each Synod session, nor is it publishing synopses of the talks, and not referring to anyone by name during the briefings.

Synod Fathers have the opportunity to give interventions, or their perspective on the matter at hand. The interventions and discussion are meant to aid in the ultimate completion of a final document, which the Pope can choose to consider in drafting his own post-Synod document.

Without access to the interventions, reporters and interested observers are left to rely on an individual Synod participant’s willingness to release their intervention or comment on that of another to attain any sense of what occurred in a given session.

Interventions were likewise not published for the Synod on the Family in 2014 and 2015, which resulted in the pope’s controversial exhortation Amoris Laetitia.

The withholding of interventions at that Synod was part of charges the Synod was being manipulated by contingents in favor of skirting the Church’s teaching on the sacrament of marriage and worthiness to receive the Eucharist, some saying the Synod on the Family was rigged for a predetermined outcome allowing Communion for Catholics living in objectively sinful situations.

Those same concerns have followed the Synod on Youth, beginning with controversy surrounding the Instrumentum Laboris, or Synod working document.

Chief among these was the insertion of the term “LGBT” into the working document.

The Holy See has never before used the term considered by many to be propaganda for a homosexualist agenda. Its first –ever insertion into an official document suggested an agenda and raised red flags, since the Church does not classify human persons by their sexual orientation.

The document has also been criticized for its handling of the issues of homosexuality, contraception, and abortion. Referencing these issues as “especially controversial” the document also says young people “may want the Church to change her teaching” on them.

Further concerns on the Youth Synod stem from reports that the viewpoints of young Catholics supposedly tapped for their input who expressed desire for sound liturgy and doctrine were bypassed for the Synod working document.