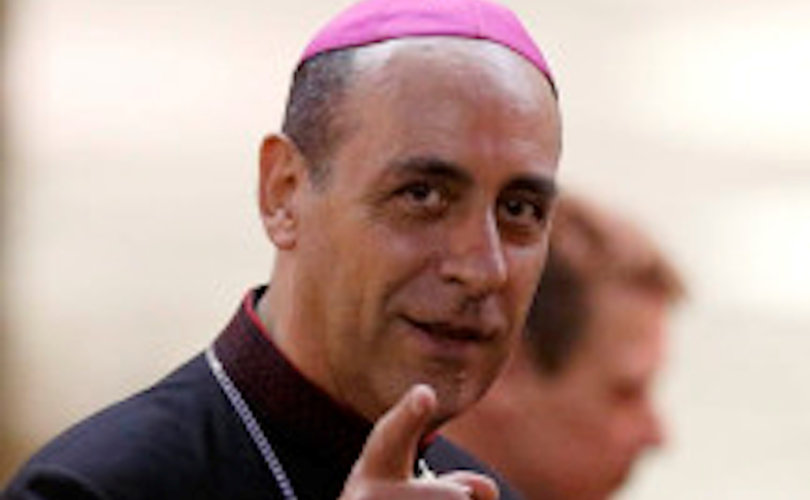 August 21, 2017 (LifeSiteNews) – A close papal adviser and the rumored ghostwriter of Amoris Laetitia said Pope Francis allowed Communion for adulterers “in a discreet way” through the document's most controversial footnote.

Archbishop Víctor Manuel Fernández, the author of Heal Me With Your Mouth: The Art of Kissing and the rector of the Catholic University in Buenos Aires, made the comments in the theological journal of the Latin American bishops. In the same article, he admitted that the pope's attempts to change sacramental practice to allow sacrilege failed at being subtle.

“Entitled 'Chapter Eight of Amoris Laetitia: What Remains After the Storm,' it gives Fernández’s most systematic defense of the document to date,” Austen Ivereigh wrote at Crux, where he provided translated excerpts.

Chapter eight of the apostolic exhortation contains footnote 351, which suggests that the divorced and remarried who lack an annulment may “in certain cases” receive the Sacraments. This contradicts the Church's perennial teaching that those participating in invalid sexual unions may not receive the Sacraments without amending their lives.

After Amoris Laetitia was released, prelates issued varying statements on it. Some, like German Cardinals Reinhard Marx and Walter Kasper, said it accomplished their modern goal of opening up the Sacraments to active adulterers. Others said the document must be read through the lens of all Church teaching, making it impossible for a footnote to change a practice that directly deals with sexual sin and sacrilege.

Four cardinals submitted a dubia, or request for clarification, to Pope Francis. They asked if Amoris Laetitia is aligned with Catholic morality. He hasn't answered.

The pope has said there is “no other interpretation” of Amoris Laetitia except the one provided by the bishops of Buenos Aires allowing Communion for the divorced and remarried.

Fernández began his article “by asserting the pope himself gave an authoritative interpretation of chapter eight of Amoris, where the footnote on Communion is found, in a letter to the bishops of Buenos Aires on Sept 9, 2016,” wrote Ivereigh. Papal correspondence can be a way for the pope to authoritatively teach, Fernández argued.

When it comes to moral absolutes, Fernández wrote, the “formulation of the norm … cannot cover everything, not the norm in itself.”

Fernández seemingly compared self-defense justifications for killing (the Church teaches it is morally wrong to intentionally take an innocent person's life) and stealing food for a hungry child to justifications for sex outside of valid marriage.

“It is also licit to ask if acts of living together more uxorio [i.e. having sexual relations] should always fall, in its integral meaning, within the negative precept of 'fornication' … there can be a path of discernment open to the possibility of receiving the food of the Eucharist,” Fernández wrote. “I say, 'in its integral meaning,' because one cannot maintain those acts in each and every case are gravely dishonest in a subjective sense.”

“In the complexity of particular situations is where, according to St. Thomas [Aquinas], 'the indetermination increases,'” he wrote.

“Adultery refers to marital infidelity,” the Catechism of the Catholic Church teaches. “When two partners, of whom at least one is married to another party, have sexual relations – even transient ones – they commit adultery. Christ condemns even adultery of mere desire. The sixth commandment and the New Testament forbid adultery absolutely” (CCC 2380).

Fernández argued it's unfair and “not easy” to describe a woman as an “adulterer” if she'd “been beaten and treated with contempt by her Catholic husband” and then has sex with another man, from whom she “received shelter, economic and psychological help from another man who helped her raise the children of the previous union, and with whom she has lived and had new children for many years.”

“It can happen that one of the spouses is the innocent victim of a divorce decreed by civil law; this spouse therefore has not contravened the moral law,” the Catechism continues (CCC 2386). “There is a considerable difference between a spouse who has sincerely tried to be faithful to the sacrament of marriage and is unjustly abandoned, and one who through his own grave fault destroys a canonically valid marriage.”

The Catechism does not give permission for that not-at-fault spouse to enter a new sexual union. (If the marriage is annulled, then the parties would be free to do so.)

The pope's “great innovation is to allow for a pastoral discernment in the realm of the internal forum to have practical consequences in the manner of applying the discipline,” wrote Fernández.

Fernández said the small, “hyperactive” group of critics of Amoris Laetitia use a logical “death trap.”

“Comfortable rigidity can be a betrayal of the heart of the Gospel,” he asserted. Such language is evocative of the pope's frequently-used accusation of “rigidity” against Catholics.