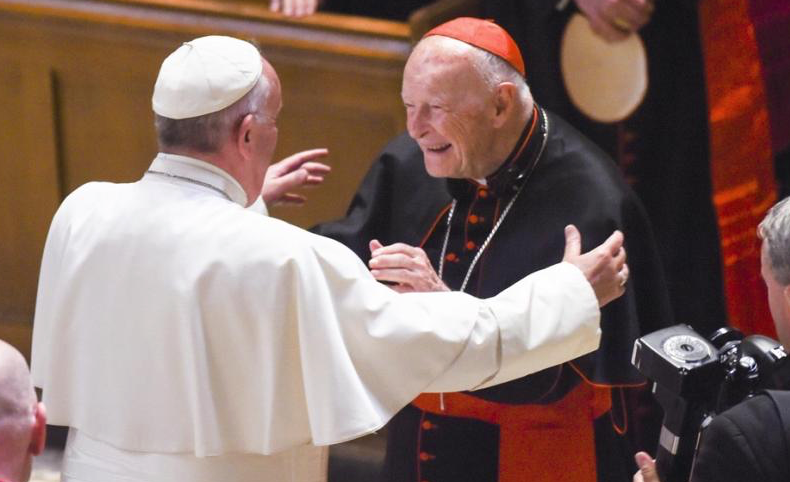 October 5, 2018 (LifeSiteNews) – Did disgraced former Cardinal Theodore McCarrick commit fraud when voting multiple times to approve a dubious $25-million Papal Foundation grant requested by Pope Francis? Considering he was for at least three of those final votes voting with a huge conflict of interest given the Vatican investigation into his child sexual abuse, it would certainly seem so.

This insight and much more comes in a blockbuster First Things report by Matthew B. O’Brien last week. O’Brien points out that three of the Papal Foundation’s most prominent clerical leaders – McCarrick, current Board of Trustees president Bishop Michael Bransfield and the Foundation’s first Executive Director Monsignor Thomas Benestad – each happen to be facing serious allegations of sexual abuse.

“Did these men use the grant-making power of the Papal Foundation to curry favor and buy protection from Vatican officials?” O’Brien asks. “Did they enable the misappropriation of the Foundation’s charitable grants?”

These questions and other irregularities with Foundation grant operations call for independent investigation, he says.

The alarming sexual abuse charges against McCarrick – beginning with the credible and substantiated allegation surfacing in June that he abused a minor decades ago, which then led to subsequent allegations and reports he routinely preyed on seminarians and young priests for years – have Catholics asking who knew what and when about McCarrick’s predation – and who covered for the prominent cleric, allowing him to be elevated to cardinal.

The charges have also shed light on the reported homosexual network in the Catholic clergy – an alleged power system, whose members cover for and promote their own.

McCarrick was one of three clerics who established the Papal Foundation in 1988.

Lay Stewards, or donors to the Papal Foundation, pledge “to give $1 million over the course of no more than ten years with a minimum donation of $100,000 per year.”

The money is invested to make a perpetual fund to assist the Church. The Foundation typically gives grants of $200,000 or less to benefit organizations in the developing world.

Fifteen U.S. bishops, including every U.S. cardinal living in America, comprise most of the Foundation board, which oversees the Foundation. The remainder of the Board’s members, a minority of nine, are laymen.

The Foundation gained media attention back in February after internal documents obtained by LifeSiteNews showed Francis had personally requested, and partially obtained, the $25 million grant to the Church-owned the Istituto Dermopatico dell’Immacolata (IDI) in Rome, which has, according to the former chairman of the Foundation’s audit committee, “a history of mismanagement, criminal indictments and bankruptcy.”

The pope’s original request had come in June 2017 via Holy See Secretary of State Cardinal Pietro Parolin through Wuerl, whom, as current chairman of the Foundation’s controlling board of cardinals, employed unconventional means, and “pushed hard to meet it immediately,” O’Brien writes.

By January 2018 half the funds were transferred, “over strenuous objections from a number of lay donors to the Foundation who were involved,” says O’Brien. The grant’s handling by the Board prompted the audit committee chairman and at least two other lay members of the Foundation to resign.

Cardinal Wuerl asked the Vatican not to require the second half of the grant due to the objections of the donating members of the Papal Founation.

As a result, Francis cancelled his regular annual audience with the lay donors of the Papal Foundation, scheduled for April, the first time a pope has not met with Foundation Stewards.

While at the Vatican for their April annual meeting, shocked Foundation donors were informed that the Board had decided to go ahead with the entire $25 million grant despite the objections.

McCarrick, who was an ex officio member of the Board of Trustees until his July 28 resignation from the College of Cardinals – owing to the credible substantiated abuse allegation against him – had advocated approval of the grant requested by Francis for the IDI, and McCarrick voted four times for it.

At least the three latter votes occurred after McCarrick would have been aware he was under investigation for abuse, according to the First Things report.

McCarrick’s alleged victim reached out to the Archdiocese of New York with the charges in May 2017, weeks before the Wuerl received grant request from Parolin. Before the archdiocese could have conducted an investigation, it would have needed authorization from the Vatican, since McCarrick as a cardinal fell under the Holy See’s canonical jurisdiction.

Under the law in Pennsylvania (the state where the Papal Foundation is incorporated) McCarrick would have committed fraud on the Foundation Board due to a manifest and gross conflict of interest in considering the grant request.

This is because the Vatican, to whom the Papal Foundation sends its grants for distribution, is the sole entity with canonical authority for McCarrick as a cardinal or archbishop – and thus the one responsible for policing and holding him accountable for the abuse charges.

McCarrick’s fraudulent votes would also have tainted the Foundation votes on the IDI grant, the First Things report says, and McCarrick's awareness that he was under investigation for any of the four votes renders the grant “voidable and returnable to the Foundation at the instigation of the Attorney General of Pennsylvania or any of the clerical or lay members of the Foundation’s boards.”

And further, every Foundation board member – the U.S.’s nine remaining resident cardinals, a half-dozen U.S. bishops and the nine Catholic laypeople – would be personally liable legally for the apparent failure of the Foundation’s controlling board of cardinals to monitor the distribution or use of grants.

Additionally according to First Things, after all that’s occurred in regard to the controversial grant – the rushed process for which was predicated on the premise that it was an emergency – the $13 million already forwarded to the Vatican for the IDI still sits in a Vatican bank account undisbursed.

From its 1990 inception to 2018 the Papal Foundation made $120 million in grants to hundreds of Catholic charities worldwide, mainly in developing countries.

The funds go through the Vatican

After approving its list of individual grants each year, the Foundation forwarded a check for the total amount – in recent years generally between $10-15 million – to the Vatican Secretariat of State. The Foundation trusted the Secretariat office to then send the appropriate sums to the respective charitable beneficiaries of each grant.

This indirect procedure for disbursing grants through the Vatican was adopted as a discretionary decision of the cardinals’ board, according to First Things, and is not something required by Foundation’s bylaws or articles of incorporation.

Its bylaws and articles of corporation, however, require the Board to oversee and monitor whether the intended beneficiaries receive the grants it awards, and that grants are used for charitable purposes.

According to multiple independent interviews First Things conducted with people involved in the Papal Foundation, throughout the Foundation’s nearly three-decades of awarding grants, “virtually no accounting or audits were performed to confirm that individual grants reached their intended beneficiaries after annual checks were sent to the Secretariat of State.”

“Moreover,” the report continued, “the Foundation allegedly failed to make any systematic attempt to confirm that funds received by the intended beneficiaries were used for charitable purposes.”

The apparent failure on the part of the Foundation’s controlling board of cardinals to monitor the distribution or use of grants, “raises an important issue,” University of Iowa Professor of corporate law Robert T. Miller told First Things.

By the Board’s failing to act in good faith by not carrying out its duty to monitor distribution or use of grants, every Board member would be personally liable for breaching that duty. The duty to monitor the grants was in the bylaws, making it impossible for Board members to claim they did not know of the obligation.

Further, there is a conflict created by the nuncios being the party to report back to the Foundation on any grants, because the Vatican Secretariat of the State, the same party responsible for dispersing the grants, employs the nuncios.

Additionally, there were Foundation grants identified in the staff review for which the Foundation did not have any records.

After Wuerl directed Foundation attorneys late last year to assess the Foundation’s operations and bylaws for legal compliance, the lawyers identified five problem areas in its operations and procedures in December 2017; two of which were “an apparent general failure to confirm that the ultimate recipients of its grants were operated in a fashion analogous to US public charities,” and “an apparent general failure to obtain meaningful audits or accountings of how grant beneficiaries spent the money they received.”

“The cardinals’ board of the Papal Foundation apparently distributed its charitable grants in a manner that made them remarkably vulnerable to fraud and embezzlement,” O’Brien writes, “and in so doing, the board appears to have contravened its own bylaws, and thus violated Pennsylvania civil law as well.”

“The Foundation’s chosen partner in distributing grants, the Vatican’s Secretariat of State, has a longstanding reputation of financial mismanagement,” he continues.

O’Brien then cited Cardinal Parolin’s predecessor Cardinal Tarcisio Bertone and a personal connection to misappropriating $500,000 in charitable assets to double pay his contractor friend to renovate his Vatican apartment, and also directing millions of Holy See dollars into a since-failed Italian television venture owned by his friends.

An independent investigation is necessary

The only way to answer the questions of whether McCarrick, Benestad and Bransfield misused the Papal Foundation’s grant-making power or enabled the misappropriation of Foundation grant funds, O’Brien says, “is with an independent investigation of the Papal Foundation, along with a forensic accounting of its past grants.”

An investigation like this would not be bound by canonical constraints, he says, nor encroach on the authority of bishops over their dioceses. This is because the Papal Foundation is not an ecclesiastical entity, rather, an ordinary 501(c)(3) religious non-profit.

With no permission from Rome necessary, the Foundation’s board could commission an investigation with a simple vote, O’Brien adds.

“If the Foundation does not authorize its own independent investigation,” he says, “it may nonetheless find itself facing one from state or federal authorities.”

Correction October 5: An earlier version of this story stated that O'Brien's first name was Michael, whereas it is Matthew. It has now been corrected.