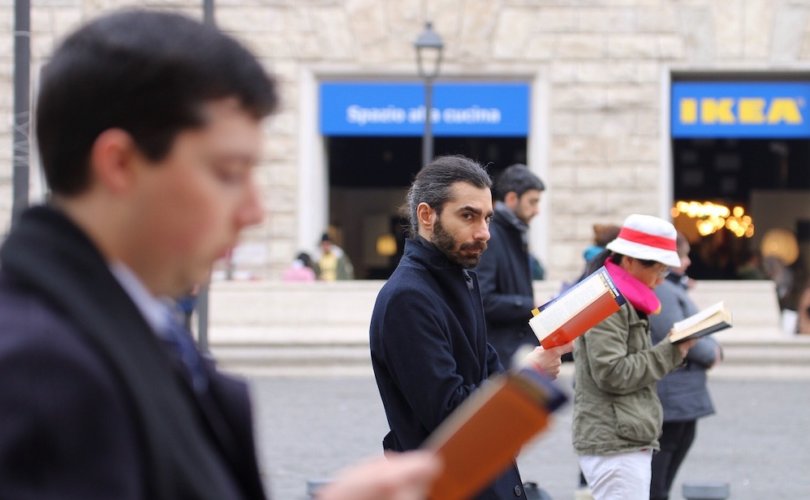 ROME, February 7, 2019 (LifeSiteNews) — Informed sources have confirmed that the papal theologian, Dominican Father Wojciech Giertych, was consulted but did not see the final draft of the controversial “Document on Human Fraternity” that Pope Francis signed this week with a Grand Imam.

The news, reported by the National Catholic Register on Wednesday, runs contrary to Pope Francis’s claim that the papal theologian “officially” read and “approved” the document, which even some within the Vatican are calling “heresy.”

The Pope came under fire early this week for signing the “Document on Human Fraternity for World Peace and Living Together” with Sheik Ahmad el-Tayeb, Grand Imam of Cairo’s al-Azhar Mosque, during an interreligious meeting in Abu Dhabi on Feb. 4.

The document incited controversy among Christians for asserting that “the pluralism and the diversity of religions” are “willed by God in His wisdom” – a statement many believe contravenes the Catholic Faith.

While some have sought to downplay the passage, saying it must be read in context, one Dominican has argued that “in its obvious sense [the statement] is false, and in fact heretical.” One respected Catholic historian has also said it “overturns” the Gospel.

During an inflight press conference on his return from Abu Dhabi, Pope Francis sought to allay concerns over the document, telling reporters: “I want to say one thing and repeat it clearly: from the Catholic point of view, the document did not go one millimeter beyond the Second Vatican Council. It’s even cited there several times. Nothing. The document was done in the spirit of Vatican II.”

“Before taking the decision to say it’s good as is, let’s finish it here, at least for my part, I had some theologians read it, and also [I had it read] officially by the Theologian of the Papal Household, who is a Dominican with the beautiful Dominican tradition — not to go on a witch hunt but to see where the right thing is. And he approved it.”

The current Theologian of the Papal Household, Father Wojciech Giertych, O.P., was appointed by Pope Benedict XVI in 2005. The post, which has been held by Dominicans since the Middle Ages, is tasked with providing advice to the Pope on theological issues, as well as checking papal texts for theological clarity.

On his return from Abu Dhabi, Pope Francis said the document “was prepared with much reflection and prayer,” adding that “both the Grand Imam with his team, and me with mine, prayed a lot in order to make this document.” He added that it took almost a year to write. “It needed to ripen, to remain somewhat confidential,” he said, “so as not to give birth to the child before the proper time.”

The Pope told reporters that “if someone feels bad” about the document, he “understand[s].”

“It’s not an everyday thing, and it’s not a step backwards. It’s a step forward that comes from 50 years ago, from the Council that must unfold and develop. Historians say that it takes 100 years for a Council to take root in the Church. We’re halfway there.”

The Pope said he can also understand how the “Document on Human Fraternity” might seem jarring to some. “It happened to me, too,” he said. “I read a sentence, and I said to myself: This sentence is a little … I don’t know if it’s sure. Instead, it was a phrase from the Council! It surprised me, too.”

He noted that in the Islamic world, there are also “various opinions” on the document, “some more radical, others not.”

“There will be discrepancies between them… but it’s a process, the process must ripen — like flowers, like fruit,” he said.

This is not the first time Pope Francis has argued that an apparently “new” (and what some consider heterodox) teaching is actually a “development of doctrine.”

When he changed the Catechism of the Catholic Church on the death penalty (n. 2267), Francis said the new wording “expresses the progress of the doctrine of the most recent pontiffs as well as the change in the conscience of the Christian people, which rejects a penalty that seriously harms human dignity.”

And when Amoris Laetitia was presented at the Vatican, its new teaching on Communion for divorced and civilly remarried Catholics was described as an “organic development” in the spirit of Blessed John Henry Newman.

Responding to the Pope’s inflight remarks on his return from Abu Dhabi, an anonymous Dominican told LifeSite: “With respect, the Pope needs to remember that his duty is not to conform only to the teaching of Vatican II, but also to that of all the councils.”

“Moreover,” the theologian added, “nothing in Vatican II states that non-Catholic religions are willed by God, so when Pope Francis tells us that nothing in his ‘Document on Fraternity’ goes beyond Vatican II, he is telling us something that is not true.”