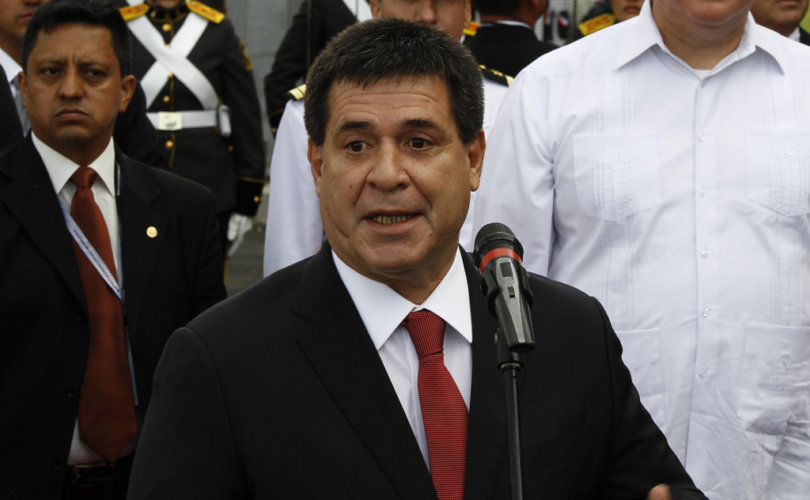 PARAGUAY, September 2, 2016 (LifeSiteNews) – In a thundering rebuke to the United Nations and the Organization of American States, the National Chamber of Deputies of Paraguay has passed a resolution upholding the right to life of the unborn from conception and asking the nation’s president to urge the member states of the Organization of American States to declare 2016 as the “Year of the Right to Life.”

The Chamber’s resolution notes that the right to life is protected not only in the Constitution of Paraguay but in the Universal Declaration of Human Rights, the American Convention on Human Rights, and numerous other human rights treaties to which Paraguay is a signatory.

The Chamber of Deputies “exhorts the Executive Power and the Ministry of Foreign Relations to support the position of the State Members of the Organization of American States (OAS) who recognize that abortion is NOT a human right,” and “reiterates its commitment to fulfill article 4.1 of the American Convention on Human Rights regarding the protection of the right to life from conception,” the resolution states.

Moreover, it “urges member countries of the Organization of American States to declare this year of 2016 the ‘Year of the Right to Life,’” and asks the country’s president to do the same.

A translation of the full text of the resolution by LifeSiteNews.com can be found here.

The resolution was passed on August 24 and sent to President Horacio Cartes, who has been resolute in his defense of the right to life since taking office in 2013, and comes in the wake of heavy pressure to legalize abortion from the United Nations during the country’s five-year Universal Periodic Review, completed earlier this year, as well as from the Organization of American States (OAS).

In this year’s review, the UN’s Human Rights Council cites three UN committees and the Special Rapporteur on Health as complaining to Paraguay that the country hasn’t legalized the killing of the unborn and doesn’t provide pro-abortion “sexual and reproductive health” education to children. They are joined in these criticisms by representatives of several European and Anglophone countries.

The OAS and the Inter-American Court of Human Rights have also been exerting pressure on Paraguay and other Latin American countries to permit abortion, with recent decisions that deprive the unborn of personhood and favor abortion as a “right,” despite the American Convention on Human Rights that protects the unborn from conception.

The response of Paraguay’s Chamber of Deputies seems to be a direct repudiation of these claims, citing the right to life as the most fundamental of human rights, and noting that abortion has never been seen as a “right” in international human rights agreements.

“Total respect for human rights in the Inter-American system has been established without including abortion and other euphemisms used to describe abortion, such as the voluntary interruption of pregnancy or sexual and reproductive rights,” the Chamber of Deputies notes.

The resolution follows another similar resolution issued by the Chamber of Deputies on May 18, calling on Paraguay’s president to defend life and family in response to a push by OAS bureaucrats to impose gender-ideological interpretations of the sexes on the OAS member states.

In June, President Cartes assured Paraguayans that he would not bow before the pressure of international agencies to undermine the rights of the unborn and of the family.

“We’ll be there, defending the rights of life and family, as always,” he told the press.